HBO Sports is launching a Documentary Festival of its own. Every Thursday night from 06.26 thru 07.24 on HBO2 a series of boxing documentaries will air. Here, via a press release, are those upcoming films.

ALI-FRAZIER I: ONE NATION…DIVISIBLE kicks off the festival on 06.26 beginning at 7:00pm ET/PT. It chronicles the remarkable events and personalities surrounding the fight that reflected the cultural divide of the United States in the ‘60s and early ‘70s. Regarded by many boxing observers as “The Fight of the Century,” the match featured two undefeated heavyweights squaring off at New York’s Madison Square Garden in a contest that was much more than a title bout. The documentary was awarded a prestigious George Foster Peabody Award in 2001.

SUGAR RAY ROBINSON: THE BRIGHT LIGHTS AND DARK SHADOWS OF A CHAMPION is next on 07.03 at 7:00pm. It reviews the life of the man many consider the greatest pound-for-pound fighter in history. The Sports Emmy winning documentary explores Sugar Ray Robinson’s (pictured) unparalleled ring career, the innovations he brought to the business side of the sport and his intriguing lifestyle.

JOE LOUIS: AMERICA’S HERO…BETRAYED debuts on 07.10 starting at 6:45pm. This one tells the story of the legendary boxer, born 100 years ago, and his tremendous impact on segregated America. The documentary reveals how the grandson of slaves became one of the greatest heavyweights of all time, served as an iconic figure in World War II and later carried himself with dignity and class through numerous setbacks.

KLITSCHKO, a modern fighting duo, have their moment on 07.17 at 6:00pm. Their piece chronicles the dynamic 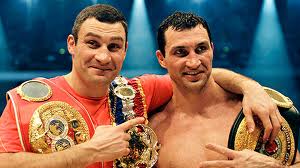 brotherhood of Wladimir nd Vitali Klitschko (pictured) from their humble beginnings in the Soviet Union to their dominance as reigning world heavyweight champions. A production of BROADVIEW Pictures funded by FILM-UND MEDIENSTIFTUNG NRW, the documentary was directed by Sebastian Dehnhardt and nominated for the 2013 Sports Emmy for Outstanding Sports Documentary.

LEGENDARY NIGHTS: THE TALE OF GATTI-WARD is one of the more recent rivalries. The look at this matchup begins on 07.24 at 6:30pm. It revisits one of boxing’s greatest rivalries: the three-fight slugfest between Arturo Gatti and Micky Ward. The blend of interviews, thrilling ring action and previously unseen archival footage presents a fresh look at the electrifying trilogy forged by two ring warriors.

Following its Thursday night presentation on HBO2, each documentary will also be available on HBO On Demand and HBOGo. There you are boxing fans, if you want to relive some great boxing history as chronicled by the award winning HBO Sports division then check out HBO2 Thursday nights. You’ll get five great films of some legendary fighters. Enjoy! 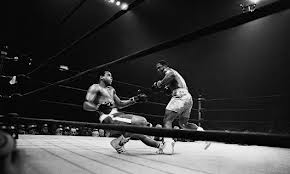