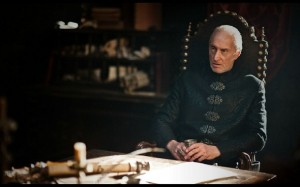 Commander. Fighter. Father. Husband. Brother. Warrior. Lord. Hand of the King. These are just a few titles to describe Tywin Lannister. Let’s face it, being born into the Lannister family certainly has its’ advantages. And if you happen to be Tywin Lannister, life is good. Why, you ask? You hold the greatest amount of wealth in the seven kingdoms. Your military force and siege tactics are legendary. Your reputation precedes you. Make no mistake: everyone fears you, nobody wants to cross you and people would rather have you in their corner. You don’t even want to think of what it would be like to have Tywin Lannister as an enemy. Ever.

Tywin Lannister is the pater familias of the Lannister dynasty. He has three children: twins Cersei and Jaime, and Tyrion, known to all as the “Imp.” While the twins were blonde and perfect, the Imp was grotesque and ugly, and his birth resulted in Tywin’s wife’s death. He lost his beloved Joanna; a wound from which he never healed from. Tyrion bore the brunt of his father’s disdain and his sister’s hatred. Although Tywin was known for being shrewd and powerful, losing his wife was the one main weakness that he may not have fully recovered from. 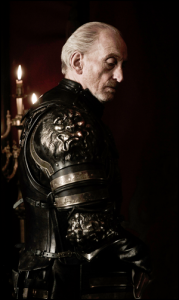 You do not see Tywin as a weakling. Tywin has a steely exterior, with penetrating eyes and a commanding presence. He is tougher then nails and he’s had to lead by example. As a Lannister, and a powerful one at that, he believes in discipline and carrying out his threats. He has been known for many acts of brutality. This gives rise to the notion that perhaps “it is better to be feared then loved.” I don’t think Tywin would lose a moment’s sleep if people did not love him. Nobody in their right mind would cross Tywin Lannister. The results are deadly: villages are sacked and burned, people are tortured and killed and property and titles are stripped away permanently.

Tywin has a very blunt way of speaking to people. You can’t accuse of him of sugar coating anything. The way he sits atop a horse, the way he wears his armor and the way he rides into battle, it’s nothing short of majestic. Due to his vast wealth, his late son in law, Robert Baratheon, was in debt to him. I don’t know about you, but I would not want to owe Tywin Lannister money. As if the man needs more money. Casterly Rock, the Lannister residence, sits on top of the wealthiest gold deposits in Westeros.

During the first season, Tywin is all about preserving the Lannister reputation and following through on his threats. When Tyrion is held hostage by Lady Catelyn Stark, Tywin barks at Jaime that “the longer Tyrion is held hostage, the less the Lannister name commands respect.” Yes, even the lowliest Lannister is worth a dime. When Tyrion brings new friends to join Tywin’s forces to fight the young Robb Stark, Tywin dismisses Tyrion’s newfound allies as unruly. The way he treats Tyrion is appalling, to say the least. Robb Stark’s forces made an example of the Lannister forces by tricking them, thus capturing Jaime and defeating Tywin’s forces. I think it is rare to see Tywin face defeat. When he does, beware the consequences. 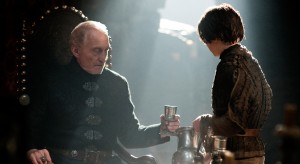 In the second season, we see a Tywin in a different light. Dare I say, it’s that awkward moment, where….you actually begin to like him? You start to have a grudging respect for the wily old guy? I’ll admit it! I liked all the screen time that Charles Dance and Maisie Williams had together. They were well matched in intellect, experience and family station. You have to hand it to Arya, even in her guise as a boy, Tywin was no fool. He saw right through that and thought her smart for it. He even let her go on about being a stone mason’s daughter, but he knew better after having several conversations with her. Tywin is revealed to a tough, militant father with his own children and yet, the way he spoke with Arya, it was almost a father-daughter relationship. He admired her candor and courage. I think he came to care for her in his own way. When they were alone, he would let her get away with being sassy – and something like that from a normal person would’ve meant being hanged for or put in the dungeons for sure. He respected Robb Stark’s military skill and rapport with Stark forces. When the time came to show brute force, Tywin came to King’s Landing during the siege of Blackwater Bay and saved the city from almost certain defeat. Add ‘Savior of the City’ to his many titles.

In front of others, he maintained his larger than life persona: true grit, brawn, brains and control. When you’re Tywin Lannister, things are expected of you. His father was a weak man. Tywin is not a chip off the old block. Nope. Not this guy. Tywin is his own trailblazer.

When you’re Tywin Lannister, enemies run screaming. People at court come calling for favours, for titles, for work. Your small council asks for your approval and input. Your chief advisors ask for your military advice and skill. New mothers beg the honour to name their sons after you.

Tywin Lannister is all about family.  Here’s a look at his tribe:

Why? Because your Tywin Lannister, THE Original Gangster of Westeros.

Eleonora is a a P/J/I teacher who absolutely LOVES all things Game of Thrones. She’s a ‘happy go lucky’ kind of lady who loves to read (and write) HBO Watch character profiles. Be sure to check back for more from her or take a look at her blog.