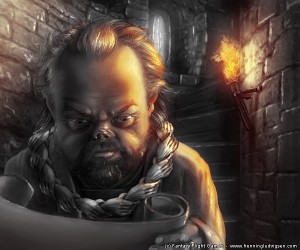 Tyrion, mockingly known as The Imp, or Halfman, is described in the novels as the peoples’ most hated and feared member of the Lannister family, and not because of his deeds, but because he is deformed.

Tyrion is the most complicated character of the series and probably the most misunderstood fictional character I’ve ever had the pleasure to encounter.  Blamed for the death of his mother, he is hated by his father and considered a smear on the Lannister name. He is reviled by his sister Cersei for his ugliness, but he at least shares some semblance of mutual love and respect with his brother Jaime.  This connection with Jaime may have been the one thing that sustained Tyrion through a childhood of cruelty and abuse, and even Jaime had more than a few moments of brutish heartlessness I’m sure.

While his siblings are beautiful, they are cold blooded, borderline psychopaths.  Tyrion’s deformity is symbolic of his compassionate nature which is certainly a weakness in this family. He manages to hide this weakness behind a face that is described as having a bulging forehead and mismatched eyes. Tyrion is without a doubt the most intelligent of the Lannisters, making up for his stature with a cunning intellect which is underestimated by all but Catelyn Stark, and possibly the eunuch, Lord Varys.

Actor Peter Dinklage and creators David Benioff and DB Weiss are doing amazing work with this character.  Through Mr. Dinklage we are able to witness Tyrions quickness of wit, his shrewdness as well as his tenderheartedness and his potential for true heroism. He is in fact, the exact  opposite of the tyrant his name suggests.

In “Game of Thrones” Peter Dinklage has an opportunity to portray a character with considerable depth and complexity when there are so few of these types of characters available to actors with dwarfism.  Dinklage has not only been able to bring out the nuances of Tyrions character from the novels, but he’s added certain elements of his own as well.  Whether he means to or not, Peter Dinklage has brought sex appeal to a character formerly considered by readers as repulsive. 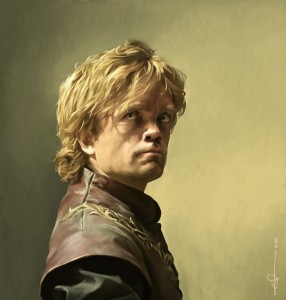 Martin purists may not like this, but in my opinion, it adds even more to the character.  He has that Lannister beauty in his face and his hair, an echo of older brother Jaime but it’s that secret softness of heart that makes him attractive where Jaime in all his “Shrek’s Prince Charming” is not.

In short, Tyrion is COOL. I can’t think of any other dwarf character in pop culture that can claim that title (except maybe Warwick A Davis on Life’s Too Short!.