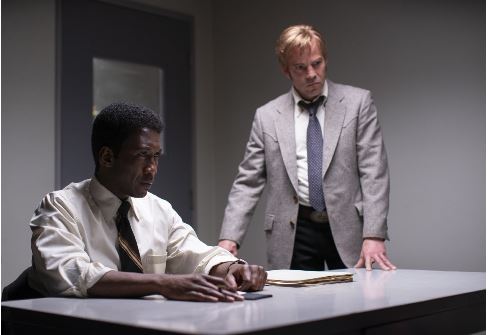 TRUE DETECTIVE will return for its eight-episode third season SUNDAY, JANUARY 13 (9:00-10:00 p.m. ET/PT), exclusively on HBO, followed by other episodes subsequent Sundays at the same time.

The new season tells the story of a macabre crime in the heart of the Ozarks, and a mystery that deepens over decades and plays out in three separate time periods. Mahershala Ali stars as Wayne Hays, a state police detective from Northwest Arkansas. Carmen Ejogo and Stephen Dorff also star. Created by Nic Pizzolatto.

That is really all we have to state here. There are no new plots points from the ones we have mentioned already. And in a way that is a good thing. We certainly don’t want to be spoiled with any more details than we’ve been given. We want Season Three of Pizzolatto’s work to unfold before us and we want to hang onto every word and image with fresh eyes and unperceived notions. Just reflect back on how you were gripped by Season One as it begun and how unsure we were of how Season Two was going to match it. Intense, brooding, moody, intriguing are all words to describe TRUE DETECTIVE and we are marking our calendars for its return.

Pictured above are Mahershala Ali as Wayne Hays, a state police detective from Northwest Arkansas and Stephen Dorff as Roland West, an Arkansas State Investigator whose career has been influenced by a baffling crime. They are the lead true detectives this time around. To help fuel the anticipation for this latest crime investigation from the craftwork of Nic Pizzolatto (with a writing assist from David Milch) here is another look at the released trailer. I think you will see how easily this all fits into the tone & construct that is TRUE DETECTIVE.