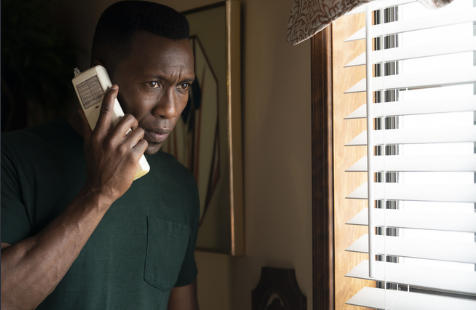 Many events, many cryptic hints about something in Wayne and Roland’s past have led up to this episode. Wayne’s memory lapses become more frequent, so you really have to pay attention when the storyline goes from 1980 to 1990 and then to 2015. Memory loss is a scary concept, but what’s worse is that Wayne, after all these years, is still terribly unsettled about the case. With good reason.

Several items worth mentioning take place: Tom has apparently committed suicide. Wayne’s not buying in for a second (remember the very creepy ending with Tom staring at something inside a pink colored room, with Harris stealthily appearing behind him without warning). Secondly, the reason why Wayne and Roland’s relationship deteriorated: Harris James, the creepy police officer turned personal security detail for the Hoyt Corporation, was killed by Roland. Third, the mysterious Hoyt Corporation starts to really come into play, with some shadowy details about the family history, as provided by a retired housekeeper, later on in the episode. Fourth, Wayne is seen driving his daughter to university. It is a rare happy time for Wayne. Lastly, Amelia is rattled by the man with a dead eye, who came to her book reading and started saying all sorts of unsettling things.

Continuing on with the interviews, Wayne is questioned about the case, many irregularities and the outcome. Was he satisfied? Or was it conveniently covered up to nail the coffin shut and move on? Elisa makes a good point: the Attorney General seemed pretty quick to lay the crime at Tom’s feet, therefore absolving the 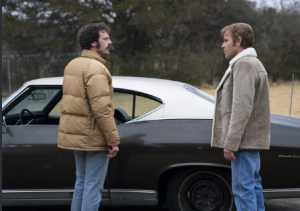 wrongful conviction of Woodard. Elisa points out that anyone connected to this case is dead – and how convenient; you can’t go after a dead person. Something about the evidence from the explosion never quite sat well with Wayne. An officer from the investigation, Harris James who later left the force to work at the Hoyt Corporation, was vague and sketchy when questioned in the previous episode. Wayne knows in his bones that the evidence found on the Woodard residence was planted to frame him and that James is linked to it; but how the hell can you go up against your superiors, the Attorney General and other unseen forces at work?

The Attorney General is a powerful man, but did you ever get the feeling that he had his own personal motives for wanting to move on along and get the case solved? Her discussion with Wayne about the dolls, as being a symbol of yet another disgusting child trafficking ring going on – really strikes a nerve. We know who made the dolls but who gave the dolls to the victims? And a man called ‘Watts’ was asking around about Julie – this is where Elisa says the whole conspiracy about a child trafficking ring – and the nod to the first season is shown. Remember back to True Detective Season One, where Marty and Rust stumbled onto a horrendous pedophile ring that was connected with many powerful and wealthy people? Well, they get a short shout out in the episode, when Elisa speaks about how many children in the area are prey to powerful men – runaways, teenagers, orphans – and there are certain clues/symbols to look out for and how two detectives in Louisiana cracked a case back in 2012. Spirals were a clue in Season One; dolls for the current season. During the interview, Roland shows up and tells Henry that he was approached to talk for Elisa’s show; he graphically refused. He intimates that what Wayne is doing could be dangerous….but to who? Why would it be considered dangerous after decades have passed? Why didn’t Roland participate in the interviews? Is he hiding something? 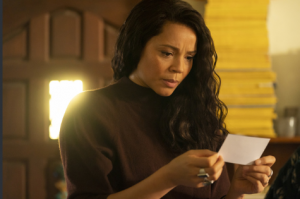 Amelia continues with her own research during the different storylines – in 1980, we see her and Wayne talking. She says she ‘has a voice’ and wants to write about what happened in the case and asks Wayne if it would be a conflict of interest if she were to go ahead. Wayne full on encourages her to do so – and yet, when you see them in the 1990s storyline, he’s fraught with tension about the Purcell case and doesn’t support her going around, trying to find out additional information about it. However, Amelia digs deeper; she gets some after speaking to Lucy’s best friend and obtains a picture, in which a black man and a white woman are in the background; that was taken around Halloween. A trip to a local bar leads her to how Lucy used to socialize with a lot of men – and that her cousin, Dan O’Brien, was a patron, too. Who are the two people dressed up as ghosts in the picture? What’s Lucy’s connection – did she sell her children? Was that aggressive man from her book reading in the Halloween picture?

In 2015, Roland and Wayne have the opportunity to meet with a retired housekeeper from the Hoyt residence. She supplies plenty of information on the tragic family history (a daughter who was widowed and lost a child, smashing up a car) and how bad luck plagued the family. The daughter stayed housebound and needed looking after. However, restrictions were soon imposed on any workers inside the residence: they were only allowed to work in certain rooms. A brief description of another employee (a man who wasn’t social with the rest of the workers, one who was allowed to go downstairs) makes Roland and Wayne think about the connection to Julie, the dolls and the couple who was seen in the area so long ago. We also see a dark car parked outside Wayne’s house (this time he’s not seeing things) and Roland snaps a picture of the license plate. Who’s been watching Wayne? Are he and Roland in imminent danger?

Remember the cryptic things that Dan said in 1990 about “things he knew” – well Lucy’s dead from an overdose in Las Vegas (which Wayne finds phone records to support his hunch about Harris James being linked to her death); Dan was eventually found in a quarry and Tom is dead of an apparent suicide. When you look at the typed note, did Tom ever strike you as the type of guy to whip out a typewriter and compose a suicide note? Someone is certainly taking great pains to eliminate all loose ends. 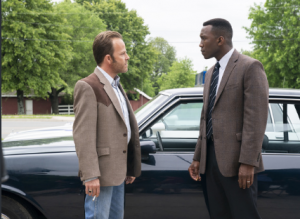 Roland and Wayne’s professional relationship starts to flounder in the 1990s. Roland gets uptight about Wayne’s suggestion that they’ve missed major clues from the 1980 Purcell case. Why would you be so prickly, especially when your police partner has clues that actually make sense?! We see what tore the men apart – Roland and Wayne tail Harris down a dark and winding road. They bring him to an abandoned farmhouse, beat him and whilst trying to extract details of what was really going on with the Hoyt mansion, Harris pulls a fast one on them both, saying he can’t breathe. Wayne frees Harris from his handcuffs, a struggle ensues and Roland shoots Harris dead. Both men are upset and visibly shaken and now have to go about disposing of the body, but not before hurling insults. At home, in the wee hours of the morning, Wayne burns his clothing, staring into the barrel, watching the flames while mumbling to Amelia that they’ll talk in the morning. Things have gone from bad to worse.

The final moments of the episode linger on the image of Wayne taking a call from the unseen Mr. Hoyt. There’s a subtle threat about how he knows Wayne’s family are inside the house – and wants to speak with Wayne about the previous night. How the hell would Mr. Hoyt know about what transpired? Who else was out there, watching Roland and Wayne? Did Roland sell Wayne out or was he also threatened by Mr. Hoyt in a similar fashion? As Wayne makes his way towards two black Lincoln limousines, with heavily tinted windows, we get a very bad feeling about it all means.