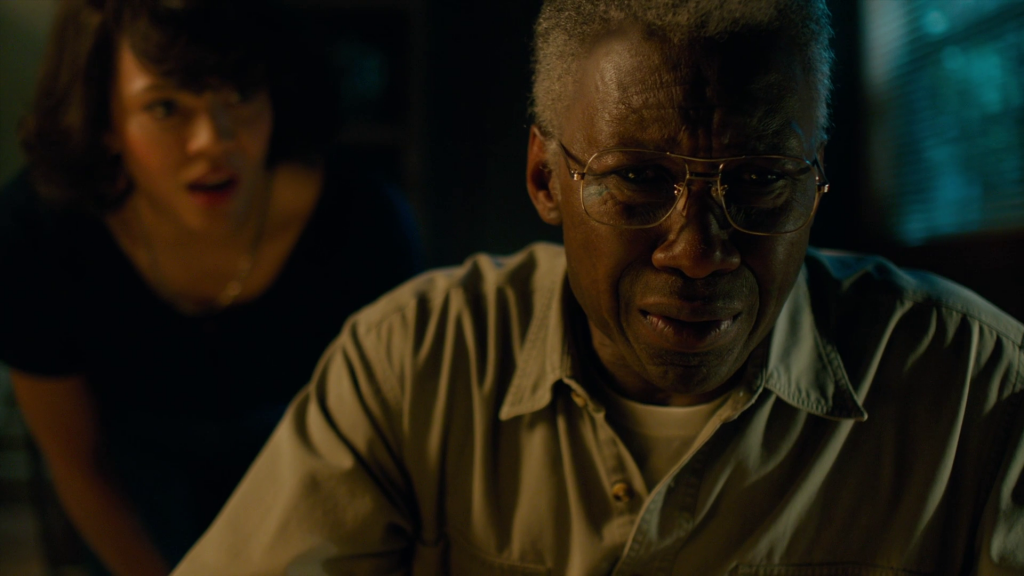 Very few limited series can pull off what True Detective has done three times —spanning multiple timelines in a single season, confining to a singular location, and often utilizing the past as a thematic element of cruciality, linking not only to clues for a case but often also to personal demons our protagonists are carrying from their pasts. This season of True Detective is not only a return to form for the series — it has become a league all its own. (It appears a near four-year hiatus was exactly what the showrunners needed.) Much like season one (and, thankfully, much unlike season two), True Detective is intertwining its mystery through various timelines — this time, three total: 1980, as Detective Wayne Hays first investigates the kidnapping and murder of two children (only one of which was killed); 1990, when the case is reopened when it is discovered Julie Purcell is alive (due to her fingerprints at Walgreens); and 2015, in which Hays is taking part of a true crime documentary about the case (and his schizophrenia seems to take full swing). However, in True Detective form, it is clear we are not being given the big picture, creating an enigmatic puzzle for the viewer that has become both engaging and mind-boggling as the mystery unravels. 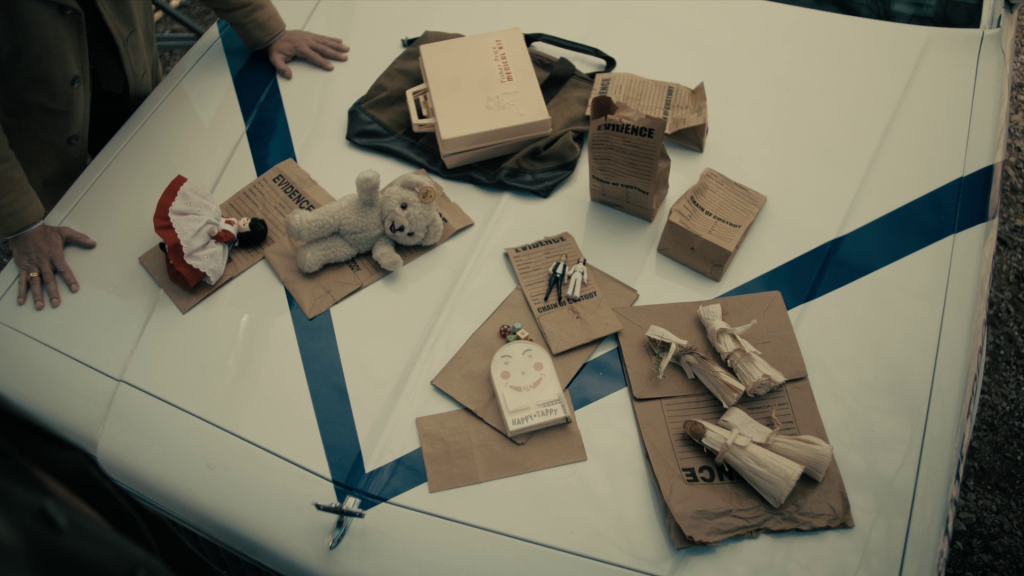 “The Big Never” has 24 time-jumps in total, each bit narratively rich and complex without feeling overly complicated or contrived. For the sake of avoiding 24 paragraphs, the focus will remain on the three main timelines and the theories or thematic elements by which they are connected. There are vital clues scattered as the season has progressed: the game, Dungeons & Dragons, which the Purcell children played in the woods (in which it is important to note, three sets of fingerprints were found, only two matching the Purcells); the scrap notes, which Hays finds in Julie’s room (six total, reading “I’m always here,” “don’t listen,” “I’ll keep you safe,” “it’s okay,” “it’s alright,” and “have a good night”); new drawings (which we can now compare to locations for over-analyzation); Hoyt Foods (it’s not really True Detective until it’s criticizing the corruption of capitalism at some point); and lastly, but likely most importantly, the role of Amelia in the case and her haunting return (quite literally) in 2015, taunting Hays, asking, “Are you waking up to the illusion?” A major takeaway from her monologue during Hays’s hallucination is when she reveals, “You’re worried what they’ll find… what you left in the woods. Finish it.” This all begs the question, what exactly do we have on our hands? At face value, these clues are extraneous and lack coherence. However, when pieced together, they amount to several damning possible scenarios, and furthermore, give insight to who exactly committed the murder and what happened to Julie Purcell. 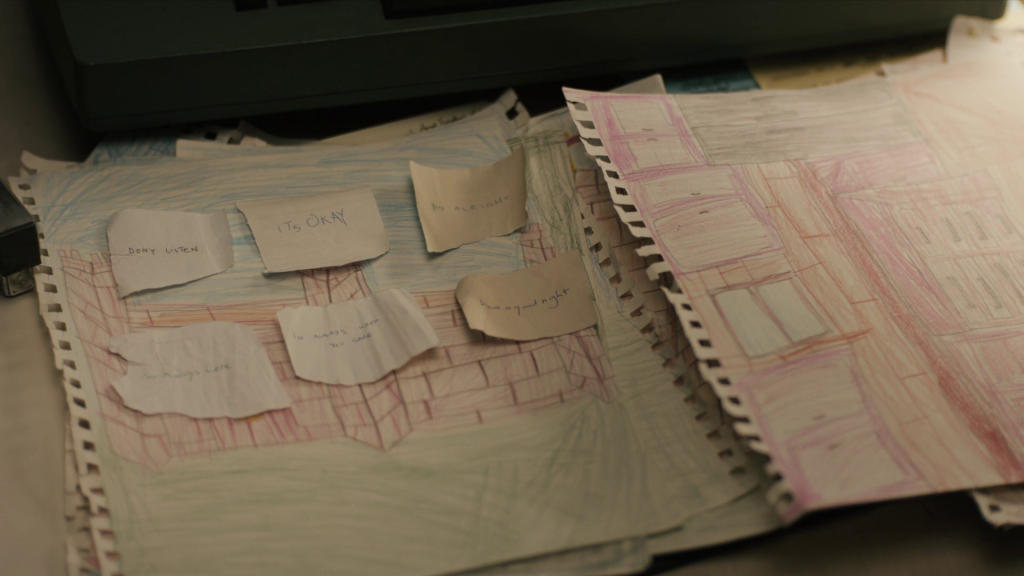 Let’s start with the game. The Purcell kids played a lot of Dungeons & Dragons, and as Hays later learns, so did a third, unknown “secret friend.” When paired with Devil’s Den and the Satanic dolls, this seemingly adds to the occult lore building in the case. This may, however, be a blatant red herring. The game itself could have been a form of grooming for kidnapping, utilized by an abductor who saw an opportunity in children creating a fictional world outside of the depressing reality from which they attempted to escape. Next, the scrap notes. These were seemingly written to comfort Julie, presumably by Will and passed through the hole in the closet. The hole in the closet may also be of importance here, as we know “Cousin Dan” stayed in Will’s room in the Purcell home. The notes, while may be a source of comfort from Will in a tumultuous household, may also hold a clue as to this man’s possible involvement in Will’s murder. Did he drill a hole to look into Julie’s room? If so, to what end? There is a major possibility this man was harming Julie and may have had more sinister intentions, and this an arc the season has entirely avoided for the time being — perhaps intelligently so.

The Purcell kids’ drawings have been a unique window into their lives as the season has progressed, and those found in “The Big Never” are incredibly damning. The brown sedan becomes an integral clue in this episode, and while conducting an investigation near where it was spotted, Hays interviews a farmer. This man states he saw a black man and a white woman in a brown sedan and later refuses to allow having his home searched without a warrant. This gets interesting, however, when the man’s home is compared to the children’s drawings. 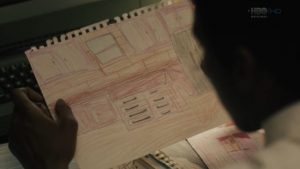 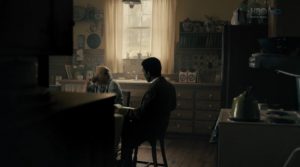 The resemblance between Julie’s drawing and this man’s home, counters and windows and all, is uncanny. If this is the case and Julie has been in this man’s home before, what role did he play in her disappearance? There are, of course, many suspects to consider to this point. As aforementioned, Cousin Dan’s intentions have been entirely unknown aside from his existence in a tumultuous household. This is, however, where our list of suspects becomes important. The locals have scapegoated a Native American man deemed “the garbage man” who sells scraps he collects, and he is physically assaulted and left beaten on the street by a group of white men. While we see him return home to carry a large, long bag — possibly the body of Julie Purcell — it is highly doubtful for True Detective to confirm a horrifically racist suspicion, therefore using such as a red herring. Hoyt Foods has also been hinted at as the corporate “big-bad” of the season, with their tie to the Purcells having been their mother’s employment there. It would be very much like True Detective to tie this into a diabolical corporation, though much like Cousin Dan, there is much left to be explored. Additionally, a very unique clue is left to be explored by the Purcell parents, in which Will’s first communion photo is found and his physical position matches that of his body placement after rigor mortis. 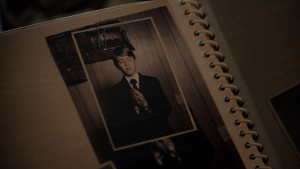 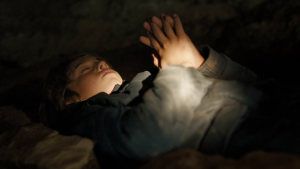 There is one haunting commonality (or rather, theorization) between all the timelines occurring this season that may serve as a crucial clue to deciphering the Purcell case: there may be a cover-up at play in every single timeline. One takes place in 1980 when the unknown kidnapper takes the children and murders Will. Though we do not know why Will was killed, it is safe to assume Julie was kept alive after her brother’s murder. Several on Reddit have theorized this was an owner of Hoyt Foods, who lost a daughter and then groomed Julie for abduction — the “secret friend.” The reason for the children leaving the home has also been attributed to Cousin Dan and the possibility that he raped Julie, therefore causing the children to run away. This takes us to the second possible cover-up taking place in 1990 when Julie’s fingerprints are found and the Hays investigates the case once again — most likely with the aid of Amelia. Because Julie was never found, it is also highly theorized Hays assisted Julie in escaping after finding her in 1990. Now, twenty-five years later, Hays is being interviewed by a true crime series and is clearly buckling under the pressure, dead wife reminding him of the futility of life and all. This would explain why he is constantly listening over his recording — Hays wants to keep his story straight.

Amelia is a fascinating person to consider in this scenario. We begin seeing the downfall of their marriage in this episode after the publication of her book, and we are also aware 2015 is the first time Hays reads it. Their most telling scene together is during his hallucination in which she asks, “Did you confuse reacting with feeling? Did you mistake compulsion for freedom?” Is this a clue to Hays murdering Julie’s captors and the fact that he has been covering up for it since 1990? And, like Amelia Ghost asked, what did he leave in the woods? While these may all be rambling theorizations, we know well Hays is a volatile and unreliable narrator with much left unsaid, and considering the cerebral and macabre nature of True Detective, nothing is off the table.

The new episode of True Detective, “The Hour and the Day,” airs this Sunday, January 27th. Here’s a behind-the-scenes look at “The Big Never” along with what’s coming in the weeks ahead: