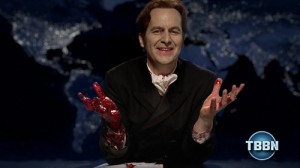 At the end of season three, Russel Eddington, vampire king of Missisipi was encased in concrete after having lost his partner of 700 years.  Many savvy True Blood fans viewed that scene as an open door for the character’s possible return.  And in this case, they might be right.

“I left them on a high,” O’Hare told the paper at the WGA Awards on Saturday. “They have been very, very nice to me, and they tell me that they think I’m going to come back.”

“Someone discussed a possible idea with me, which, of course, I can’t tell you,” he said. “But it’s a very cool idea. It’s not far fetched, but it’s not something that you would see coming.”

True Blood Season 4 is expected to premiere this June.  Stick with HBO Watch for all of the latest spoilers as we move closer to the launch of the new season!