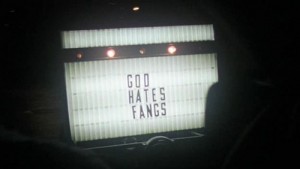 Though the vampires on HBO’s True Blood may have everlasting life, the itself show may not.  Though wildly successful in both ratings as well as DVD sales, Charlaine Harris, the author of the ‘Sookie Stackhouse‘ novels says that publicity from the show has kept her from pursuing other works:

“Truthfully, the next two books will probably be the last two books in the series. I still love Sookie, but I’m beginning to want to write something else, and Sookie’s kind of taken over my life. I was able to write other things for the first few years I was involved in Sookie, but then after the start of the television show she took over so much of my time because of my increased publicity obligations that it’s been very hard to write other things, and I really need to do that.”

The show itself hasn’t always followed the books to the letter so it stands to reason that the show could indeed exist without any new content from Charlaine Harris if it remains popular.  All good things must come to an end but it would be a shame to see such a phenomenally popular franchise staked so soon.  True Blood fans needn’t worry too much, the author has agreed to write at least two more books in the Sookie Stackhouse series so we’re surely guaranteed a few more seasons of Bon Temps drama.  (Perez)