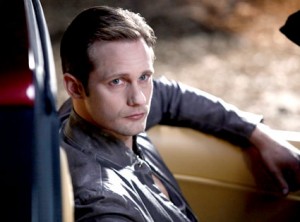 If you’re even a little bit wary of being ‘spoiled’ this fourth season of True Blood then I must advise you to to navigate away from this particular article.  It would seem that the mighty viking-vampire is in for quite a ride this season!  Read on at your own risk.

At the annual William S. Paley Television Festival in Los Angelas Skarsgård spoke to fans of the show:

“This powerful character is just gone—it’s not what we’ve built up over the past three years; it is just gone. And it’s a lot of fun for me because it’s the polar opposite of who Eric really is…He is lost. He doesn’t know how he is, he knows he’s a vampire, but he slowly finds out stuff, like, ‘Did I do that? I killed those people? Why would I do that? Oh. Really?’ It’s not easy to hear—and not knowing who he can trust, who’s a friend or an enemy. He’s very vulnerable.

Kristin Bauer, who plays Eric’s partner in crime, Pam added this: “Eric’s being 10 years old, basically. He’s so sweet and cute, because he’s got amnesia. So our whole dynamic has changed. You’ll see how incredibly comedic and brilliant Skarsgård is, which everyone doesn’t know.

Skarsgård went on to say: “Things are definitely not stable for Eric. He doesn’t know who he is, so 1,000 years of resentment for humanity is just gone. He’s very innocent…So Eric needs help.

As if that weren’t enough to get you to tune in to HBO’s True Blood this season, Nelsan Ellis also had this little tidbit about Eric and his character, Lafayette: “There’s still going to be a little somethin’-somethin’ between Lafayette and Eric.” Stranger things have happened (particularly on this show)!

True Blood premieres this summer.  Rumor puts the date at June 12th but stay tuned to HBO Watch for confirmation!

HBO also surprised us with our first tiny peak at the new season!