Everything’s coming up fae, isn’t it? 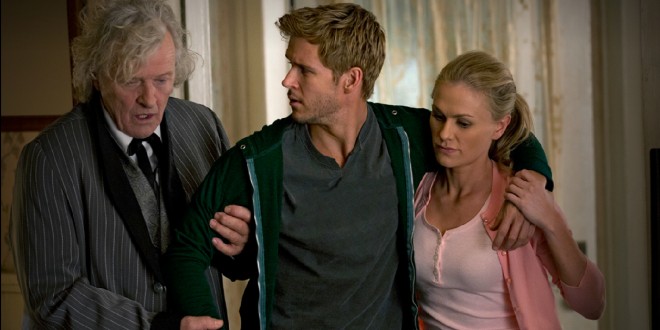 Tonight’s episode has some really promising moments as far as foreshadowing the rest of the season’s storylines. Let’s start with Sookie.

She’s far less annoying so far in these first three episodes than she had been as of late, and I’m liking her attitude towards dealing with her shit. Her ultimate denial of Bill has been a real highlight, as the fact that she hasn’t wavered in her opinion makes her stronger than ever. Bill takes a turn for real evil this time around, and the scene in which he storms into a terrified Sookie’s house uninvited is a chilling one. It seems as though there are not two, but three big bads this season, and Bill the God-like is quickly rising in rank.

The notion of synthesizing Sookie’s blood reminds me much of an X-Men like plot; using the genetic gifts of “freaks” to the benefit of others. But at what cost? The final scene with Bill when he realizes his next fae target are the children of Andy was horrifying. He’s stooping lower than ever, and more so than my fear for what he can accomplish as indestructible Bill, I very much hate Jessica’s loyalty to him. I understand the maker-progeny bond, but she is blind to his corruptness and I fear it will only put her in more danger.

Rutger Hauer continues to delight as Sookie and Jason’s grandpa. He brings more gravity to the fae species and storylines, which in turn makes those plot points much more interesting. I think before this season True Blood didn’t really know what they were going to do with fairies. The threw them in as vampire catnip, but never alluded to the true dark origin of the species. If the show was going the way of the books, the fae would be one of the most feared enemies the show could cook up. They are ruthless. And so far the only person to make that idea seem plausible is Grandpa Niall. If they decide to really own fae as a thing on this show, they’re going to have to give it much more thought and attention if they don’t want it to come off as a joke.

Speaking of a joke, let’s talk about the entire Emma/werewolf/shapeshifter plot. Ugh. What a clusterfuck. Just like so many characters before them, the time of the werewolves and shifters seems to be at a crossroads. What to do with them? They began to lose traction last season as an interesting group, and they are even less enjoyable now. First of all, who does Alcide think he is? I had a fear his rise to pack leader would render him cruel and power-hunger. And now he’s got some misguided stake in Emma? I’m sorry, but the motivation behind that ENTIRE idea to take Emma from Sam was ridiculous. It just doesn’t hold any water. Why should he even care? If her grandmother wanted to get her back, that’s one thing. But Alcide has no reason to be so invested in her. And now Rikki’s been relegated to a growling meanie, for what? Is she with Alcide or not? At this point, I don’t know and I don’t really care. I don’t care about any of the werewolves because they don’t have good storylines. Aside from imminent persecution after vampires, their lives don’t intersect with others on the show and they continue to be a group of outsiders with no real purpose. Give me season 3 werewolf/vampire tussles any day over this. 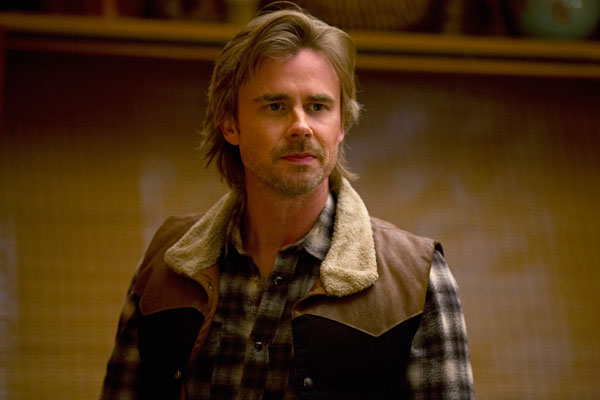 Sam goes for Sam. Poor, poor Sam. What are we going to do with him? I do hate that he lost Luna, but if his sole purpose now is to hide his shifter abilities and take care of Emma, then I would rather he ride off into the sunset at this point. Don’t get me wrong, I LOVE Sam. Always have. But, at this point he’s borderline Hoyt-territory–wandering through Bon Temps with no real purpose, adrift in a sea of supernatural clusterfucks.

And now we’ve got he added element of these kids parading around under the guise of the US Vampire Unity League. Like we need more people tied up in their mess! Anyway, these kids are all up in everyone’s business, causing a mess. They cause (well, Rikki causes really, because she’s a real hothead) an all out werewolf brawl which ends up with most of them getting killed. I’m not sure what their purpose is either, but I can’t imagine it’s going to make anything better.

It is worth noting that while lost of the things going on in Bon Temps are kind of ridiculous, the allegorical implications that come from the parallels being drawn by the racism toward all things vampire and supernatural are eerily accurate of current events. (even if the USVEL seems like a lazy attempt to bring that to the surface). The attitudes that were first brought to the surface in the very first season of True Blood towards the undead are back with a vengeance, and it’s an all out war. They’re denied equal rights, they’re murdered for sport, they’re hunted down like animals. The Governor has even instituted what you could see as a vampire concentration camp where he and a team of merciless scientists torture and test (and eventually kill) vampires–those following orders under the misguided ruse of ‘doing good’ have historically led to bad, bad outcomes. Though they may not be human, thanks to the Authority’s follow-through with the bombing of the Tru Blood factories, they are now definitely on the bottom of the totem pole as far as civil rights go. And it’s been mentioned by others on the show that after the vamps comes other supes. It’s true, and with the horrifying new weapons and anti-vamp precautions being doled out by the government, it’s an all too real reminder of current day inequality. That allegory was one that True Blood did very well in the first season, and it would be nice if the main storylines this season were limited to the fairy/Warlow situation+ Bill + humans vs. supes. (I know it’s too much to ask that True Blood just limit itself to only two main storylines. Ha.) 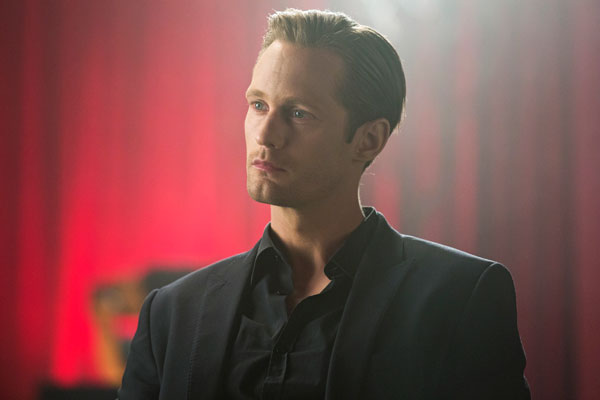 As I mentioned before, Bill may be a big bad, but he’s only  just one. Let’s not forget the Governor and Warlow are out there, too. The Governor is the perfect amount of creepy crawly sleezeball, and his interactions with Eric continue to be some of the best scenes so far this season. And let’s be real: Eric is the undeniable MVP of season 6 so far. He is really killing it this season. His rage is caged, but unhinged; his motivations are clear; and his obvious love for Sookie is truly touching. I’m tired of of his riffs with Pam, but that’s mostly because Pam has been demoted to a pretty pink ball of whine. She used to be one of the best characters, always ready with whipsmart snark and observation. Her problems with Eric seem to be on the downslope, and I hope they stay that way. And I hope her and Tara continue to be a thing, because that ‘ship is the best.

The addition of the Governor’s daughter to the mix of vamps in Eric’s caravan is a nice development. I am undecided if she is genuinely against her father’s ambitions, or if it’s all a ruse. Either way, I like her so far. (Though I did give a big eye roll when Tara flew off with her. Ugh. Typical Tara.) She seems like she could be tougher than we think. It will be interesting to see, too, if the Governor really is willing to roll over to save her when push comes to shove, or if he’s willing to sacrifice her for the greater good. (I have a feeling we both know what the answer is.)

The relationship growth between Sookie and Jason this season is a real delight. I always feared Jason would also go the way of Hoyt–become a useless burden sooner or later and see an untimely  demise. I can tell the writers have something in store for him, but I don’t know what yet. Why do Warlow’s visits have such an effect on him? Warlow has now made an “appearance” at Sookie’s twice now, and each time he’s left without so much a trace and a flash of light. And each visit has left Jason doubled over in pain. He’s been off his game since he got bit before the Authority implosion, and now he seems to be in seriously bad shape. I have no idea what it all means, but I am more interested in that than many other things on the show.  I do hope that Jason does not eventually become another gravestone in the long cemetery that is Sookie’s life. 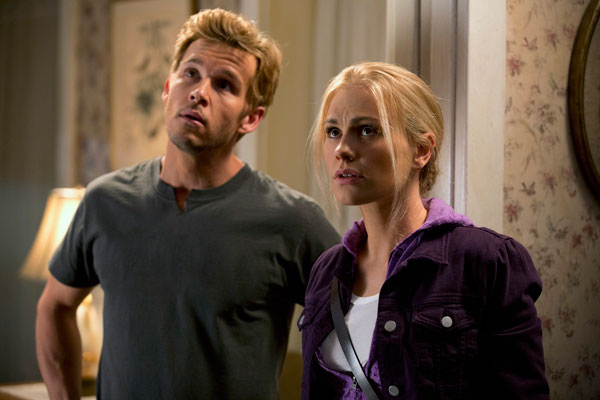 Speaking of Warlow, Grandpa Niall is resolute in his mission to end the vampire demi-god, and he’s now found another warrior to back his efforts. Ben! Oh, Ben. I knew we were just getting started with you.  I still feel like something is fishy about his whole story (and for a moment I thought he was somehow connected to Warlow or his mission to capture Sookie). I can’t quite put my finger on it, but maybe it’s because True Blood has taught me nothing if not to be weary of strangers because they are almost never what they seem. I like Ben so far though, and I am shipping him and Sookie real hard. Wouldn’t it be nice if (until she and Eric are together for real) she could find a nice fae boy to love for a hot minute? She deserves that.

-I will always find it funny when Andy refers to Bill as Vampire Bill.

-Steve Newlin’s wife was back tonight! And man did her hair look CRAY.

-Jessica never ceases to amaze me with how hot she can look.

-I like Holly a lot, and I really do hope her and Andy can make it work. Despite the fact that he has four rapidly growing halfing daughters.

Here’s a peek at episode 4: