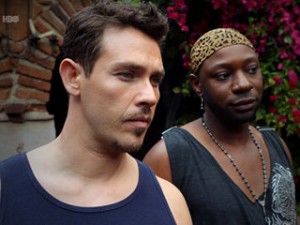 The Gay & Lesbian Alliance Against Defamation (GLAAD), the nation’s lesbian, gay, bisexual and transgender (LGBT) media advocacy and anti-defamation organization, announced today the nominees for its 22nd Annual GLAAD Media Awards.   HBO’s True Blood recieved a nomination for ‘Outstanding Drama Series’ while HBO’s Bored to Death received a nod for it’s “Escape the Castle” episode in the ‘Outstanding Individual Episode’ category.  True Blood has already been recognized by GLAAD as the most gay friendly show on TV so it would appear to be the favorite for the award.

Other nominees include Glee, Modern Family, The Kids Are All Right, Project Runway, The Oprah Winfrey Show and Burlesque. The Awards will be held in New York City on March 19 and in San Francisco on May 9.  Check out the rest of the nominees in GLAAD’s official video below.