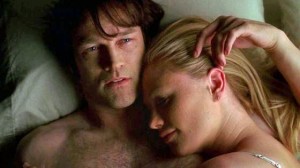 True Blood has captured the hearts, minds and sexual curiosity of millions of people all over the world.  Digital Spy gathered 1000’s of votes recently in a poll to determine the top ten sexiest shows of all time.  True Blood dominated the list by taking the #1 slot along with another popular HBO program, Sex and the City picking up the #7 slot.

We’re not sure whether it was the explicit True Blood sex scenes with some of the hottest human beings on the planet or the ritualistic blood drinking taking place durring said sex scenes that got you people going but either way there’s no denying the sexual prowess of HBO’s True Blood.  Some of the other mentions included The Tudors, Queer as Folk and Buffy the Vampire Slayer.   Take a look at the full list for a few videos and small descriptions for each show.