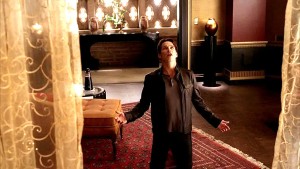 Remember how most of this season I’ve been harping on how True Blood has been almost painfully obvious in it’s plots and character transformations? Well all that complaining has been validated with one of the most unsurprising episodes of the season in “Sunset.”

It was never really in doubt that this episode would be mostly setup; every season is crazy-setup-crazy crazy-setup-setup-FINALE OF CRAZY. (Usually.) But I was still disappointed in just how unfulfilling this episode was. The climax with Russell was barely even that, the convergence of character’s paths was unsatisfying. My hope is that the finale will try to rectify the shitshow that this whole season, but I’ve become weary of that actually happening.

Just as I suspected, Eric’s allegiance to Lilith was merely a front. He’s over that bitch and all the Authority’s crazy antics, and apparently so is Nora. After the Lilith-Godric celebrity deathmatch last week, she’s apparently changed her tune completely and is now anti-Lilith. Not that I truly care either way, but the fact that she flipped so quickly just seems like sloppy, convenient writing. Eric needed a buddy to fight the Authority with and now this would the second time that Nora’s flipped sides. I’m glad Eric has an accomplice, but I will remain skeptical of Nora’s intentions for a while. 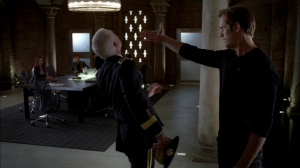 They escape the compound under false pretenses after Eric kills the Authority/US government liaison, and then subsequently kill both of their guards en route to “fix the situation.” Now they’re vagabonds in the wind or something. I’m assuming they’re going to be looking for a way to take down the Authority (or Russell?) from the outside, but there’s only so much we can see in the 1 hour finale.

Meanwhile, Bill continues his quest to be the biggest douchebag on the show. After getting his feelings hurt by Jessica’s manipulation, he forces her to turn Jason. She and Jason best her guards as well (seriously the Authority guards are the worst), but she’s then captured by that stupid bitch Rosalyn at Fangtasia. Because APPARENTLY Jessica doesn’t know the meaning of the word ‘hide.’ At this point Bill’s gone completely off the deep end, to the point that he actually killed another member of the Authority because he was threatening his place as Lilith’s ‘chosen one.’

Come to find out that Lilith has been playing them all for fools–she’s appeared to Bill and Salome and bestowed upon them both the label of Chosen One. Is it bad that I don’t super care about the inevitable showdown between these two power hungry assholes?

Sam and Luna get captured too, with Sam offering himself up to Bill for food. How that’s going to play out I don’t know.

Also: there was a pointless scene with Terry and Arlene in Merlotte’s.

Also also: there was a pointless couple of scenes with Alcide and his dad. I never thought the day would come when I didn’t crave a shirtless Alcide in every episode, but his character’s been relegated to stupid background stories and I would rather see him off the show or dead than stuck in a quagmire of boring bullshit.

Also also (yawn) also: Terry’s fairy tryst has resulted in a fairy baby. Of course this is going to ruin his relationship with Holly as the encounter only happened a week again True Blood time. Even though I’m not really invested in Terry at all, he’s actually turned into a quasi-normal person this season and I would hate to see that nice relationship between him and Holly ruined. 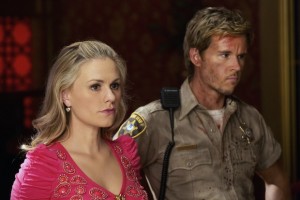 The other huge development at this point was over in the realm of fae. Sookie’s still there, and she is allowed to speak with some super old & wise fae–the oldest alive. This whole scene was so silly that I just don’t really even want to talk about it. The only fun thing was when everyone freaked the fuck out when they found out that Russell was still alive. If that reaction was solely because Russell poses a huge, seemingly unbeatable threat, that’s fine. But was it just me or did it seem like that revelation had some sort of bigger meaning to the elder fae?

They all hatch a ridiculously stupid plan to try and capture? kill? lure? (the details were unclear, obvs) Russell, which of course fails. He glamours Jason immediately and he takes them to the threshold of their fae paradise. All inhabitants and Sookie look on in horror as Russell threatens to kill Jason until the elder decides to take matters into her own hands. Now, if you thought for one second that she would actually make it out of that tussle alive, you’re an idiot. OF COURSE Russell was going to drain her dry. It was one of the stupidest things the show’s done in a while, as I think having a centuries-old fairy with loads of insight in the show’s repertoire would have definitely come in handy (this being true only if that elder wasn’t an ADD weirdo like she actually was). It seemed almost an insult that it was so easy for Russell to take her, but he did nonetheless. And OF COURSE drinking all that fae blood would enable him to access the fairy world. 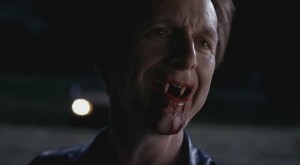 So what we’ve got now is two imminent showdowns: one in fairy world between all the fae and Russell, and one at the Authority compound. If the two converge, I’m not really sure how they’d do it. Will Eric and Nora be fighting Russell or the Authority? Since Russell has clearly been proven practically unkillable, how will the bloodbath between him and the fae play out?  I almost feel like this season has been leading to a big showdown between the fae/vamps/werewolves/shifters. In one of the earlier books there was an all-out war between witches & werewolves & vamps (which we only barely saw in season 4), it’s not until like the 9th book or so when an epic fairy war breaks out. And it’s brutal you guys. I’m almost wondering if this is the show’s way of combining all of those elements into one bigger, much more convoluted situation. However way you slice it, it’s fucked.