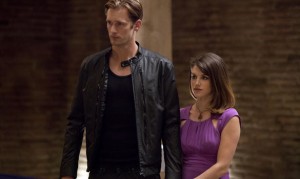 Hello again my devoted Truebies! Sorry I was away last week, but vacation called. Now that I’m back, let’s get down to business. And business is good!

Picking up from last week’s episode, Lafayette is back to being the good old sassy as hell Lafayette that we all know and love. Where that Lafayette went, I don’t know, but I do know it’s really good to see him back to his old self. I LOVE IT. That brujo shit did not look good on him. He wins runner-up for Snarky Bite of the Week with this hilarious oneliner: “I ain’t gchat for dead bitches.”

After agreeing to help both Arlene and Sookie with their respective favors, Lafayette gets in touch with some very interesting dead folks. He talks with Gran, who leads them to discover a previously unknown fact about Sookie’s parents’ deaths. Sheriff Bud Dearborn was the one who found their bodies. So naturally Sookie heads on over to Bud’s to ask him (and read his mind) about what he remembers from that day. Turns out that sure enough, he suspects it was a vamp back then, given what he knows now. But as Sookie presses his mind for more info, she gets clocked by Bud’s crazy girlfriend. Next thing we know Sookie’s bound and trapped in a pig pen right next to Hoyt. OH WAIT you might have been thinking. Yes, yes. The ringleader of the supe-killing gang is none other than retired sheriff Bud Dearborn. About that same time we realize this, so do Andy and Jason, who finally put what combined brain power they could muster to the test and figured out that Bud was the one behind the gang. This was a very (surprisingly) nice surprise and a fantastic way to tie together several storylines that I thought were just sort of barely getting by on their own. They truly blindsided me with the revelation of Bud’s heinous involvement, and with a season that’s been painfully obvious, that was really refreshing. Where this leaves Sookie and Jason’s quest to find their parents’ killer, I don’t know. But now that the gang of murderers should be done wreaking havoc they should be able to really focus on that from here on out. OH! And Sam was a pig! That was great. (PS, I always hated Bud so this is poetice justice for me.) 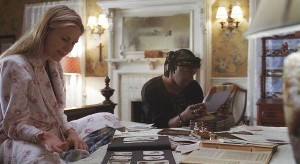 Lafayette also helped Arlene try to rid Terry of his ifrit rantings, and basically all I’m going to say is THANK GOD THIS STORYLINE IS OVER. Patrick went crazy and Terry ended up killing him. The end. Unless the writers don’t realize that this is a black hole of shit and they try to bring Patrick back from the dead as an vengeful spirit or something. GOD that would be terrible.

Over at Authority HQ, Bill and Eric are still under house arrest, forced to take part in insane shenanigans at the hands of Salome and Russell. Eric, after being visited by Godric, sees the error of his ways, and more importantly, how fucking crazy everyone at the Authority is. He is not keen on playing their game. Bill on the other hand, he’s gone full rogue and is now knee deep in Lillith’s blood and master plan. It was of course his idea to bomb all the TruBlood factories, thus forcing vamps to break mainstream and feed on humans. The sheer chaos that’s sure to be created by the lack of TruBlood, resulting in an all out war between vamps & humans (and other supes taking sides I presume), is perfectly structured to be quite a fun storyline to watch play out. Salome has Bill wrapped around her little finger, while Eric has the always delightful Molly (Tina Majorino) at his side, trying her darndest to get the hell outta dodge. Eric manages to apprehend Nora (that crazy bitch), only to have Bill and Salome foil his escape plot. Of course. I can’t tell if this is an actual evolution of Bill and the trajectory that he’s going to be taking, or if it’s all a ruse. I find it very hard to believe that Bill would willingly go down this path, but if his mind is at the mercy of Lillith’s blood, this seems more plausible.

The exchanges between Pam and Tara continue to be a highlight of the show, with this week’s Snarky Bite of the Week going to Pam for this gem: “Just because we drank a bitch together don’t make us Oprah and Gayle.” 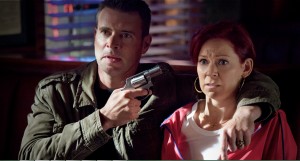 Overall I really enjoyed this episode. It tied up a bunch of loose ends rather nicely and had several main storylines converge in an unexpected and intriguing way. That being said, at the tail end of the episode we were briefly introduced to “the new sheriff of Lousiana,” AKA Eric’s replacement. Much to Pam’s (and mine) shock, this wannabe Slipknot cover boy claims to be Eric’s replacement. Uh, no thanks. He was RIDICULOUS. If they were trying to make him a genuine scary threat, they failed. If they were trying to make him seem like a joke in the presence of Pam and Fangtasia, mission accomplished. I’m not sure where they’re taking THAT guy, but those brief 5 seconds of him were all I needed for a lifetime. And WHY True Blood couldn’t just revel in the afterglow of major plot lines coming together in such a nice bow and CHILL OUT for like 5 seconds I will never know.

We’ve only got 3 episodes left, so savor them people!