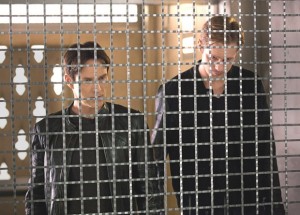 Hello again my children! Sorry I was away last week, but I’m back this week full of piss and vinegar over the goings on in Bon Temps. So let’s get to it, shall we?

Dealing with the aftermath of Roman’s untimely (but welcome) demise at the hands of Russell has turned out to be quite the interesting turn of events. As soon as Roman was killed, things kicked in to high gear! Can you imagine how much more interesting the past few eps would have been if Roman had met the True Death earlier? That whole Authority/Sanguinista storyline would have had way more juice to get going and be interesting, instead of boring us with long speeches that got us nowhere. And to see Russell truly insane again is just such a delight!

With probably the least surprising “reveal” ever, everyone finds out that Salome is the one who dug up Russell and subsequently helped him escape to kill Roman. Why this was not obvious to Eric and Bill is beyond me, but whatever; I just thought they were smarter than that. So with Roman gone, it’s unveiled that the Authority are just a bunch of lunatics who don’t really want to mainstream–that is, most of them are now anyway, since Russell has obviously decreed that all those who don’t abide by his rules will clearly get their heads ripped of ASAP. So, to honor Lillith, what remains of the Authority, Russell, and Eric & Bill all indulge in the blood of Lillith only to have it jack them up like hippies on LSD. This was such a fun sequence; to see the vamps running around New Orleans amongst throngs of tourists, doped out of their minds was hysterical. It only went down the inevitable dangerous path of OH SHIT when they crashed a fun little family get together…and slaughtered everyone in sight. The appearance of Lillith was bizarre, and frankly something I could have done without. Aside from that, I enjoyed the whole situation, especially the reappearance of Godric to Eric’s subconscious. Will Eric actually snap out of his blood-infused haze? Who knows. Maybe Lillith’s blood is just too strong. 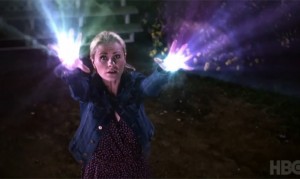 This whole episode was full of OH SHIT moments, one of the best/scariest would definitely have to be when Lafayette visited Jesus’ uncle and GOT HIS MOUTH SEWN TOGETHER. I can most assuredly say that I will be having nightmares about my lips being sewn together for a while. Anyways, Lala went to go see what the fuck was up with Jesus’ creepy head appearing to him and his mom, only to discover that old Don Bartolo had Jesus’ head all up in his house, just for kicks. He’s convinced that he can “take back” the magic that Lafayette took from Jesus. And just as he’s about to kill Lafayette, his baby mama up and murders him all crazy like and releases Lafayette. This whole storyline and reappearance of Jesus’ head was weird, somewhat disjointed, and kind of pointless…? I feel like the resolution of finding his head and killing Don Bartolo was lacking. Now what is Lafayette going to do? Did that do anything to aid in his own inner demonic brujo staying away? Or will we see that again? Because UGH.

Another huge UGH for me in this episode would be the not surprising development that sees Hoyt joining forces with the gang of super killers. After they “saved” him from the vamp outside Fangtasia, they bring him into the inner circle of hate, only to rile him up and have him announce his staunch hatred of ex-girlfriend Jessica. With this knowledge (and the news of their gang member being killed by Sam), they vow to get revenge, this time with Hoyt in tow. I can’t express how much I HATE this idea. I know Hoyt has been stumbling around aimlessly since his break up with Jessica and fallout with Jason, but this? No way. If they can’t find anything for him to do to be relevant, then just have him killed or something–don’t have him turn into a member of a hate crime group! Lord knows True Blood has no qualms with killing people, anyway. 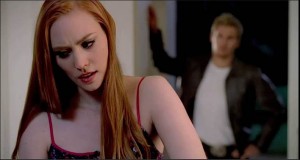 Speaking of Jessica, OH SHIT man! Her and Jason had another blow up, this one coming to a head because Jason was being a sad little puppy dog and revealing to Jessica that his parents were killed by a vampire, and Jessica accidentally revealing that she’d just been feeding. (Good on you Jason for thinking for a second and realizing that was blood on her lips.) They fight, and it ends with Jessica biting Jason (what?!), and then Jason shooting her in the head (WHAT?!). Suffice to say I don’t think they’re on speaking terms. And since Jessica is surely in the crosshairs of the hate group now, she’s going to wish she hadn’t done that. (Granted, I don’t think for one second that Jason would stand by and watch anything happen to her if she were in danger, but whatever.)

With the ‘the Stackhouse parents were killed by a vampire’ story gaining momentum, it’s so obvious that it’s going to be some soap opera reveal of a vampire that we already know. Who that might be, I have no idea, but you know it’s going to be someone we’re already familiar with. Why else make this such a big mystery? This is so Days of Our Lives of them.

Sookie was on a roll again this week, becoming a better character with each passing episode. This season has proven to be the year of Sookie, with her evolving from constantly whining Sookie to refreshingly frank and funny Sookie. 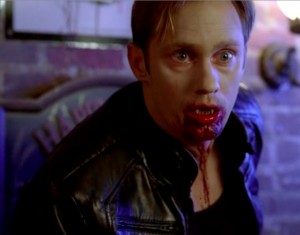 She realizes what her life is and she’s going to do whatever she wants! She learns in this episode that her fae power is, in fact, finite. Should she use it all up, that would be it. Of course she takes this information with a happy heart, and thus takes to the yard to begin expunging her “microwave fingers.” However, it’s not just Sookie’s light rays that will be gone once she uses up all her power; her ability to read minds would also disappear. All of these things would give Sookie the “normal” life she’s always wanted, so the news that that could one day be a possibility is beyond alluring to her. I’m interested to see just how far she takes this, as we all know that her powers have come in awfully handy  in the past AND even if she were powerless, let’s get real–she’d always still have a fucking crazy life.

Terry and Patrick are still tangled up in that atrocity of a storyline about the cursed fire demon. That is all I will say about that.

Not surprising anyone, Alcide and that other were chick who has his back against the rest of the pack are totally into each other. Yawn. We all know he’s still hung up on Sookie, and I’m still holding out hope for THAT.