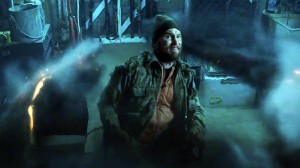 This episode was in a word, obvious. In another word, it was frustrating.

We pick up with Terry and Patrick at their old comrade’s bunker, only to find that he has apparently gone off the deep end obsessing over some sort of “fire monster.” This “ifrit,” as he refers to it, is actually not news to Terry, who admits to seeing this fire monster after the massacre in Iraq. He says they were cursed by the dying woman he offed, and he and Eller are actually on the same page about this supernatural threat. And BLAH BLAH BLAH THIS STORYLINE IS TERRIBLE. I don’t even want to talk about it except to say that the supernatural element of this story is RIDICULOUS and I don’t even want to acknowledge the existence of this entire plot.

Meanwhile, over at Fangtasia, Tara is relegated to bar duty and a studded bustier courtesy of Pam. In pops Jessica, who tries her best to assuage Tara’s concerns about being a vampire, and for a split second True Blood tries to get you to think they’re just going to be the bestest friends ever this side of the grave. Yeah right. In what was the most obvious turn of events of the evening, Hoyt tempts Tara, Tara indulges herself (in a stall right next to Jessica, natch), Tara and Jessica get in a bitch fight over Hoyt. Groan. I’m a little bummed out by this, as the idea of a Jessica/Tara partnership could have been pretty entertaining. (Side note: Jessica looked smokin’ tonight. I mean damn!) They did seem to briefly acknowledge the fact that Tara feels “crazy.” Does that mean it’s just because of her newborn status, or do we still think she’s a little off-kilter due to half her head being blown off? 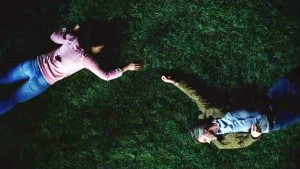 In the aftermath of the bizarre double murder outside Sam’s, he ventures over to Luna’s to break the news. I wasn’t really invested in this story at all, considering I could barely even remember those two shifters. But True Blood actually did surprise me in that as soon as Sam was ushered out the door by Luna, he was shot by a band of heathens in rubber masks. Out runs Luna, who is (presumably) fatally shot. THEN out runs little Emma, who seemingly avoided all the shots fired at her, shifts into a wolf, and runs off into the wilderness. I was legitimately shocked at this turn of events. Sam shot!? No. Not my Sam. Luna killed? Eh, don’t really care except for the fact that Sam can’t catch a fucking break with the ladies, and now her daughter is out there alone. What intrigued me the most of this storyline though was the reveal of this crazed, violent gang of killers.

The addition of this terrifying group is a weird one, if only because there’s already about 17 other storylines going on at the same time. That’s not to say, though, that if this had been one of the only storylines this season and they could really give it its due attention, I wouldn’t be even more intrigued. At face value, this group seems to be comprised of redneck bigots, those sorry souls who get off on discriminating against any supes. And this is why I find this so interesting: this seems like a plot that would have fit in the first season really well. Remember, back when things were so simple? Simple yet juicy plots like this are what the earlier days of True Blood thrived on, what made it so good. Now what could be a great plot among some of the original core characters could easily get overshadowed by the more dramatic (but less interesting) stories plaguing Terry, the Authority, etc. This storyline seems to get back down to one of True Blood’s essential themes of discrimination against the supernatural community, a direct allegory to the discrimination the LGBT community suffers on a daily basis. If this is the case, and my predictions of what those masked men stand for is true, I will be very interested to see where it goes. And with the sneak peek from next week showing some vamp getting a bullet to the chest while on top of Hoyt, I can only imagine things are just going to get worse. And since Jason and Andy need something to do besides take mini-vacays to fae world, they’ll probably be diving head first into the investigation of these hoodlums. 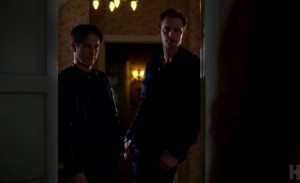 And with what had to be the slowest build up ever (save for this Sanguinista bullshit), Sookie, Eric & Bill, Alcide, and one of his employees venture into an abandoned hospital to capture/kill Russell once and for all. They finally reach him, and he seems too weak to even seem threatening. Yeah right. I didn’t think for one second Russell would be lying in wait, unable to defend himself. He welcomes the gang with that biting, ancient snark we so love about  him, only to have Alcide ripped away at the last second before the credits roll. Man, did I miss Russell. Though not so certain how they would have missed them, I’m sure Russell’s been flanked by his loyal wolves since his unearthing. We’ll have to wait until next week to see if Russell actually gets a bite out of Sookie, if she uses her “microwave fingers,” and who’s behind the attack on Alcide. Though most of the gang’s excursion was fun, I think it was just such a long time coming that it seemed a little anti-climactic. The reveal that Salome (right? or is it Nora?) is behind Russell’s release was not that big of a surprise; of course the Authority was going to be knee deep in this shit. Oh, and Nora’s still crazy, blah blah blah. And the general Sanguinistas movement is still unseen, and thus boring to me. Also, the constant “threat” of those monitors on Eric and Bill is getting old. So old.

But the thing I was mostly disappointed with was the fact that Sookie and Alcide didn’t get it on! Though I had this nagging feeling that they would never do the deed, I was still weirdly let down when she barfed all over his feet and (buzzkill alert) Eric and Bill intervened at the worst possible moment. I do hope this is just a pause in that relationship, and not an end. Because YES.