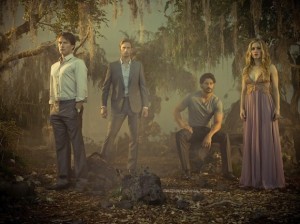 Now here’s an episode I can mostly sink my teeth into.

After 3 episodes of mostly build up, we finally get down to business with a few storylines and see some actual action (Sookie/Alcide, Pam/Tara, Nora/Authority). Of course, with any True Blood success comes those few storylines that are just taking up space that I wish they’d just sideline for a while (Jason, fairy world, Lafayette’s inner demons, Terry’s Iraq connection).

The Debbie Pelt story finally came to  head this week, with Alcide sort of confessing to Debbie’s parents that she had been killed. Of course we knew he wasn’t going to sell Sookie out, so instead he pinned the murder on Marcus, who he conveniently killed at the end of last season. So that’s all tied up in a nice little bow–for now. I really have no idea if that is really the end of that or what, but for now it’s done. And it ever so obviously led to what I will shamefully say was my favorite part of the episode: SOOKIE AND ALCIDE MAKEOUT MAKEOUT! Ok. My inner teen aside, I still think the Sookie Alcide relationship is a natural progression for both of those characters at this point. If this drunken rendezvous will actually lead to anything is yet to be determined, of course. But for now I’m content to root for them unabashedly every week, and secretly (not so scretly) swoon every time Alcide comes on the screen. (Bonus points tonight for that hunk o’beast full on BAWLING in front of the Pelts–fake or not, it was still a sight to behold.) 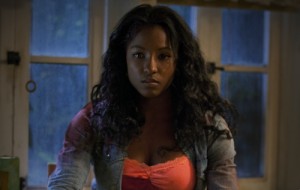 Another story that finally seemed to evolve into what could really be an interesting relationship for the show was the Tara/Pam storyline. After commanding Tara to stop acting like a dumbass and frying herself alive, Pam brings her to Fangtastia where she’s surprised out of her mind to find Eric and Bill. And after Eric ridiculously accosts her to see if she’s harboring any info on the unearthing of Russell, their relationship takes a wicked turn for the heartbreaking: Eric renounces himself as her Maker and releases her. He spewed on about some reasons for her safety and for her to thrive after he’s “gone,” but I (selfishly) still don’t think this was necessary. That being said, this scene between Eric and Pam  was absolutely stellar. I was surprisingly moved by the whole thing, and as Pam ached for the loss of her one and only Maker, I too felt the pangs of loss. Like I said, I was genuinely surprised by how powerful I felt this scene was. And I’m still just a little stung that this even had to happen in the first place. I just don’t see how this pertains to any further-moving plot points. OH WAIT. Except that this release was apparently the catalyst that Pam needed to realize that she’s a Maker, and now it’s up to her to train Tara as a vampire and keep the strong Northman blood going. See what they did there? Clever, very clever.

Pam then finally takes an interest (using the word loosely here) in teaching Tara the ways of vampire life, and the scene at the end where she’s caressing Tara and instructing her on the correct way to feed was a nice touch. I do hope this is the beginning of one fabulous pair. Pam is already awesome, but having her be a powerful mentor and Maker to Tara just seems devilishly good fun. Also, what’d you think about that talk between Bill and Tara? Now that she’s a vamp against her will, her and Sookie’s friendship is most assuredly over. And in ending that forcefully, Tara holds nothing back when she tells Bill that he needs to stop worrying about Sookie–for good. And you know what? I think Bill actually agrees with her. (And now he’s just mad at her for making out with Alcide. Oh emo Bill, when will you ever learn?) 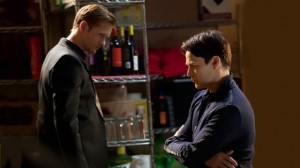 Meanwhile over at the Authority, Nora confesses to Roman and Salome who the other traitor is among them, and to no one’s surprise it was that little ass clown child vampire. UGH. After a little display to reveal his treason, Roman gives that little shit the True Death and all is right with the world. I’m sorry, but that kid was annoying.

This Sanguinista movement/threat/all out war is apparently the slowest build EVER. It’s also not super interesting. It’s not that I don’t think a full-blown war between humans and vamps wouldn’t be fantastically interesting (I do), but they way in which they’re going about telling this story is such a snoozefest. That’s all. The only thing interesting that pertains to the Authority is the ever looming threat of Russell’s reappearance, and that seems like it’s never going to happen. (Also, who let him out? Any guesses?)

Terry and his friend Scott Foley got to wherever they wanted to get—snoooooooze. Look, I’m not one to make light of anything war/PTSD related, but the decision to have this story play out on a show where it shouldn’t even be an issue is killing me. It’s not interesting, it’s not appropriate. And I liked Terry just the way he was! So we know he was involved in mass civilian casualties in Iraq. Okay. I just don’t know why this is even a story on here. I really don’t.

I also am SO over Lafayette’s inner brujo demon coming out to wreak havoc. Really, I thought we kind of killed that when we killed Jesus.

What’s with the murder of the two shifters that came to see Sam? Oooh Sam’s in trouble. Big diff. He’s always in trouble because he can’t catch a fucking break. Remember how I was complaining last week of too many storylines? THIS ONE NEEDS TO GO.

Much like the fairy storyline with Jason and Andy. DOUBLE UGH. Like I’ve said before, I think the intricacies and mystery of the fae world are very interesting (at least they are in the books), but I wish they would do away with them for the time being due to the fact that there is WAY too much shit going on. I would love to see the show be able to give that story its due diligence in another season instead of see it thrown around like a limp rag doll while 25 other plots are going on too.

Though I said earlier that my favorite part of this episode was the Sookie/Alcide lip-locking, I retract that statement. It’s my second favorite. My first favorite were the improvised lines of the “Pina Colada Song” from Sookie. That was PRICELESS. “If you like making love at midnight, and not in a cemetary….” DRUNK SOOKIE IS THE BEST SOOKIE.

Next week: hopefully the conclusion of the Sookie and Alcide’s drunken tryst, (ugh) what the hell those flashes of light towards Jason and Andy were (if those were some sort of Men in Black memory loss thing I will punch my TV), Hoyt tempting Tara, and another look at Voldemort–I mean Russell.