[box type=”warning”] WARNING: This post contains mild spoilers for the Third Season of Game of Thrones. If you do not want to know about any future events in the show, then this article isn’t for you. You have been warned!![/box] 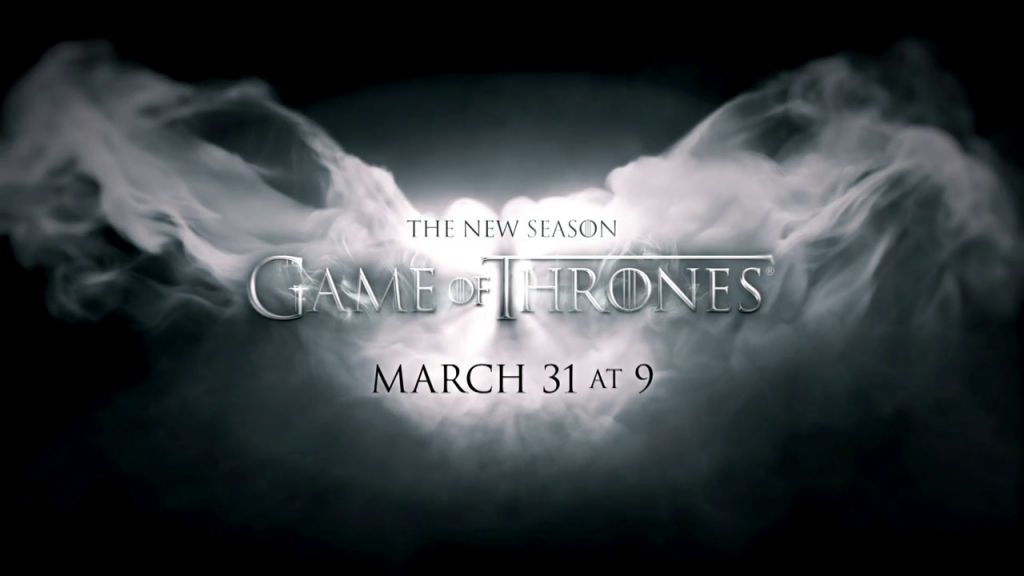 The first ever trailer for Game of Thrones Season 3 has taken the fandom by storm! With over 11.7 million views and counting, the show’s official YouTube channel has been buzzing with hits since the video was posted after it’s airing during Jimmy Kimmel Live on Friday night. So, why all this excitement? Two reasons: First, Game of Thrones is awesome; and second, HBO has taken FOREVER to supply us with any kind of reasonable trailer. And it’s about time!

In the recent months we’ve seen a few teasers here and there  – which really didn’t do anything for me at all – and a rather boring “Official S3 Poster” also released on Friday. Needless to say, I’ve needed a good Season Three fix for quite a while now. We’ve waited almost a full year for this show to return, and frankly, I’ve been desperate for something to prove all the waiting and excitement wasn’t in vain. After all, this is the season that both showrunners and fans alike have all been anticipating. The one season that is supposed to make this whole journey worthwhile. Well, now that I’ve watched the trailer a dozen times or so, I can now assure you that S3 looks like it’s going to be an incredible ride!

As March 31 grows closer by the hour, this action-packed trailer has plenty of awesome content to make even the most loyal book readers fist-pumping the air in excitement. Here are a few clips that really stand out to catch my attention; and another that had me jumping out of my seat:

If you missed it – or already forgotten – here is the new trailer: 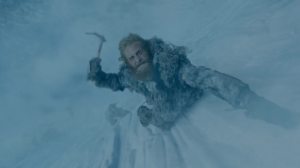 Wildings are coming! One of the first clips we see is this incredible shot of new character Tormund Giantsbane (Krsitofer Hivju) scaling The Wall. What instantly struck me are the remarkable visual effects being used to bring this amazing sequence to life. The show spares no expense to create the most realistic and vivid scenes possible, and employs a group of extremely talented individuals in order to do so. If this season is anything like previous ones, then the VFX will be nothing short of spectacular. This scene certainly gives us a taste of just how brilliant it will be, and yet it’s still only a taste.

Of course, this scene depicts Jon and his Wilding companions making their ascent up the 700 foot wall separating the country of Westeros. I actually had a feeling this scene would be included after reading a small hint in one of Cat Taylor’s blog posts a while back. Heights? Ropes? Stuntmen? I mean, what else could it have been?

Jon Snow Gets Caught in the Rain 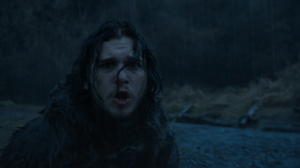 In A Storm of Swords, the chapter in which Bran and company stop at the Queenscrown has always been a personal favorite of mine. I love the imagery of the secret path through the water that leads up to the tower, and of course, Hodor yelling Hodor. I’ve been holding out hope that this scene would eventually be included into HBO’s adaptation – though probably not in it’s entirety – and this clip just may prove that it has.

The storm, the distressed look on Jon’s face, and Ygritte drawing a bow string are all reminiscent of certain events that happen during this chapter. Also, a tower can easily be in the background during the clip in the trailer when Tormund draws a blade from his sheath . Is this the Queenscrown? Not really as glamorous as depicted in the novels and there certainly doesn’t appear to be any water surrounding it. But given that these events take place almost exactly halfway through the third novel, I’m assuming this is probably the point Jon’s storyline ends. If you remember, Jon actually escapes from the Wildling group at this time, so my best guess is that this scene is indeed the Queenscrown and Jon’s storyline will end in episode 9 or 10 with his escape. His fate will be unknown until Season Four when he arrives at Castle Black to inform the remaining Night’s Watch members of Mance Rayder’s plans. Bad news is that we have to wait until the end of S3 to find out.

The Hound vs. the Flaming Sword 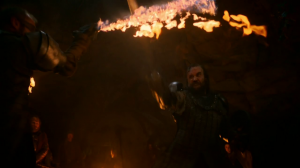 Book readers should recognize this as the sword fight between the Hound and Beric Dondarrion, and one scene that I am extremely interested to see play out on screen.  The dark setting seems to be exactly what was called for in the novels, and Beric’s flaming sword looks completely awesome. Not only is this a huge turning point in the story for the Hound, but also Arya Stark as well. I’m just hoping that it stays true to the novels because I would hate to see this scene get ruined like other changed scenes from last season.

If this clip means more badass sword fighting scenes, then I say bring it on! I have to say that I was both surprised and bit disappointed at the lack of really good sword fights in Season 2. Sure, there was Blackwater, which had thousands of men fighting to the death, but that’s not what I’m talking about. I want more of the one-on-one, intricately choreographed fight scenes that were prevalent throughout Season One. Ned vs. Jaime, Syrio vs. Lannister Guards, Bronn vs. Ser Vardis Egen are a just few examples. Personally, I’m ready to see some good sword fights in Season Three and this scene looks like one to get excited for. 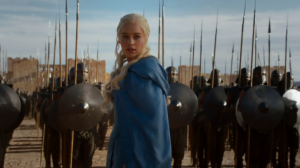 This screenshot of Dany standing in front of ranks of the Unsulled will undoubtedly go down as one of the most iconic images from Season 3, and a scene that I am heavily anticipating watching. Book readers know exactly how Khaleesi manages to procure such an army, and the following sequence of fire burning in the background gives a big hint as to what that might be. There was a set pic from Morocco floating around back in November showing giant green screens attached to boom lifts while shooting this very scene. This kind of set-up can only be used for one purpose: DRAGONS! Definitely a scene that I can’t wait to see. 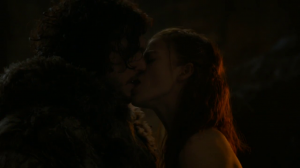 Now onto the clip that had every girl writing hate mail to Rose Leslie, the infamous cave scene. Alas, Jon Snow finally gets the girl, but this clip actually caught me by surprise. So far the series has only hinted that a possible romantic relationship will develop between Jon and Ygritte, but nothing concrete. I thought it was rather odd that HBO would spoil fans by showing a hot make-out session between the two. Of course, book readers know the deep bonds that they develop, but new viewers have only begun to find out. Why spoil them now? Seems like it would be more appropriate to include that clip in an episode preview once the story has been developed a little further. I’m sure that’s not the only love scene we will see, but one that we will all look forward to none the less. 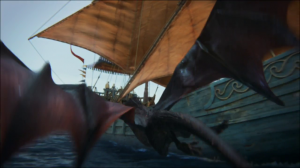 Earlier when I mentioned jumping out of my chair, well, this is why! Freaking dragons man! Amazing, stunning, breathtaking? Those words don’t even do it justice. Our first look at the actual CGI dragons for Season Three has me so excited that I want to cry. Once again, the amazing VFX team has created an epic scene with Drogon flying gracefully next to a ship, and boy did he get big fast. I absolutely love the realistic movements of the dragon. Everything from the giant wings swooping down, to the way it soars through the sky is brilliant. What’s even better is that this scene appears to be straight out of the books. Dany’s first chapter in ASoS describes her sailing to Pentos while watching her dragons fly over the ocean. Assuming this is the same scene, we should see this clip appear in the first two episode of the new season. Once again, I say bring it on!