The industry magazine  Entertainment Weekly has released some information about the anticipated return of Larry David to HBO. 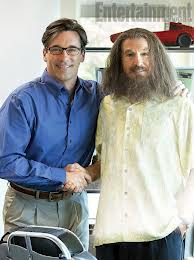 Better yet EW has uploaded the following report complete with an Exclusive Trailer from the upcoming HBO Film. NOTE: it announces that CLEAR HISTORY premieres in August!

Entertainment Weekly can, of course, obtain exclusive photos and clips because it and HBO are both owned by parent company Waner Bros. Thanks for the news EW!  We can also provide two HBOWatch links we had tracking this movie from  09.13.12 and 10.14.12.

Finally, we get to see some new Larry David material this summer. More T-n-T’s (teases & trailers) to come as we mark our calendars for HBO Films: CLEAR HISTORY coming in August.

It isn’t Curb Your Enthusiasm season 9 but we’ll take any Larry David we can get!