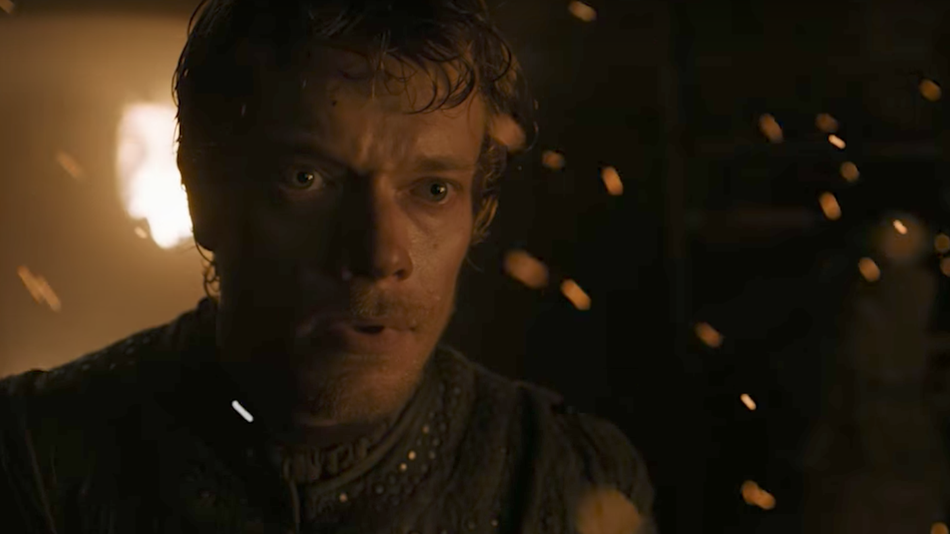 “He who fights and runs away will  live to fight another day,”- Demosthenes

In less than twenty-four hours since the release of “Stormborn,” the second episode in Season Seven of Game of Thrones, the internet has declared Theon Greyjoy a “lost cause,” “a coward,” and, because we’re all school children at heart, a “huge loser.” The cascade of hate is rather amusing, because these aren’t exactly new sentiments– but the hate for Theon certainly exploded overnight, after the Greyjoy prince’s flamboyantly evil uncle, Euron, took his niece captive, as Theon bailed, leaping off a ship rather than taking Euron up on his cackling offer of hand to hand combat. There’s a reason Jon Snow is almost everyone’s favorite character in the show—people generally want to cheer for the guys running head-long into battle, waving their swords around and bringing destruction down on un-dead henchmen, Bolton berserkers, and other unsavory folk.  But just like most audiences managed not to notice Theon holding his own in the battle last night (for someone who has never favored swordplay and wasn’t even wearing armor, he seemed to be doing his fair share of damage), people fail to see Theon is fighting wars that are just as difficult as Jon’s trials in the battlefield.

Last Season, Theon returned home to Pyke after finally managing to escape (Sansa Stark in tow) the clutches of Ramsay Bolton, who had systematically destroyed his physical health and sense of self for a good three seasons. It wasn’t a very happy homecoming. His sister,Yara, who had ventured down to the Boltons’ happy home, the Dreadfort, in Season Four, had previously declared Theon dead after she failed to rescue him from the threatening menace of a shirtless, knife waving mad-man, freshly bloodied by his pyscho-lover’s intimate embrace. Yara blamed Theon for the men she lost in the encounter and time she wasted when she could have been scourging the shores, or whatever it is she likes to do in her free-time beside making passionate love to every whore she comes across.  Looking back at the failed rescue, one can’t help but make comparisons to Theon’s decision in this past episode. No one accused Yara of cowardice when she turned and ran from Ramsay’s terrifyingly caged dog. For Yara, despite having the element of surprise, her own competent men at her back, and a healthy dose of confidence, her decision to flee without her brother was seen as a “tactical retreat.” Yara was apparently simply unequipped to deal with the challenges of rescuing her brother, and no one gave her a particularly hard time, mainly because it’s always easiest just to blame Theon for the terrible crime of being mentally unstable after months of torture, just as Yara does, when he ultimately returns.

Later in the season, Yara’s solution to Theon’s mental trauma is to get drunk and get over it. It’s the attitude a pirate would have, no doubt, but no amount of wine and tough-love pep-talks are going to help after what Theon has been through. In Season Six, shortly before Sansa Stark murders Ramsay Bolton, he tells her he will always be part of her. It’s Theon, however, who will always be haunted by Ramsay, even as Sansa finds strength in her experiences. When the buzz of battle quiets, and Euron taunts Theon, knife to the neck of his sobered, bloody sister, Theon looks around him and sees fire and devastation, men mutilating–cutting off tongues and ears. And in that moment, he sees Winterfell burning. He sees the Dreadfort dungeons. And he sees Ramsay. To Theon, the idea of being kidnapped and tortured again is unthinkable. He would rather drown. If that is cowardice, then, we are all cowards.

Theon’s greatest strength is that he indomitable. He will always get back up and try again. If he can, one can be sure that he will save his sister. Despite our preference for heroes who blindly charge at every foe, Theon’s dramatic exit was a wise move. Euron would have undoubtedly overpowered him, and most likely murdered him on the spot, or otherwise dragged him off as a prisoner. Many have mistakenly assumed that if Theon had simply charged his uncle, Euron would have given up Yara, if he was truly bested in combat. Theon recognized he was dealing with a raging maniac (what else is new?), and wisely chose not to engage in his antics. What else was Theon supposed to do? Engage in negotiations? One doubts that would have been entertained by Euron who doesn’t seem like a fan of thoughtful discourse. If both Greyjoy siblings are captured and dead, there is little hope for either of them. With Theon on the loose, anything can happen. And despite the low regard the masses have for Theon these days, what happens will probably not end well for his uncle.

There are many ways to be brave. Stubbornly sticking with your besieged castle, jumping off massive walls, and facing down men with ferocious dogs, unarmed, is pretty brave in my books. So is finding strength in yourself when there is no other place to find it. The greatest bravery of all, however, is surviving in a world that wants nothing more than to destroy you. And Theon Greyjoy, inexplicably, continues to survive.