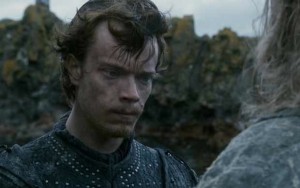 It seems to me that the worst lots in Game of Thrones tend to survive and prosper. The same can be said for Theon Greyjoy, who originally hails from Pyke, on the Iron Islands. He was taken from his home as hostage and lived with the Starks of Winterfell in exchange for his father’s ‘good behaviour.’

Bad enough you are an outsider. Shameful to know that your father – Balon Greyjoy – had rebelled against Robert Baratheon and Eddard Stark was forced to surrender, after two of his sons were killed during the battle. What’s worse is that you are forced to leave the only home you’ve ever known, to come live in a strange place, with people you don’t know and home becomes nothing but a distant memory.

That’s not to say that it was a horrible experience. Theon got to train with Ser Rodrik Cassel, who was the Stark’s most trusted and seasoned warrior and weapons expert. He was allowed to dine in the Stark hall, had food, clothing, shelter and an education provided by Maester Luwin. It really wasn’t such a bad experience. To hear Theon whine about it constantly would make a person think he was starved daily and thrown into the dungeons on a regular basis.
Would you like some cheese with that whine, Theon? Or how about I give you fifty cents, so you can go call someone who cares! Oh wait, there are no payphones, only ravens. You get my meaning! 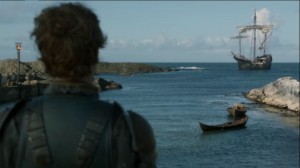 Oh, poor Theon. Life is rough. You wear the best chain mail and cloaks, ride the nicest horses and practice with the finest swords. Forgive me – I have a burning desire to go all medieval on Theon – and teach him a lesson in humility. Theon Greyjoy is arrogant, cocky and well, to be quite honest, rude.  In the books, that was the way he was painted. In the series, he came across the same way. Actor Alfie Allen does such a convincing job – when you watch Theon Greyjoy, you get the idea he is angry, confused at times, conflicted with who he really is and that beneath his exterior, something wicked is brewing. Theon walks around with a swagger. He thought he was the ultimate bad ass fighter. I’d like to see him go against someone like Syrio Forel or Barristan Selmy. Theon wouldn’t last five minutes. But, I digress.

He also thinks that he is quite a ladies’ man. This is evident in the first season’s premiere, when Theon is speaking to Ros in a bedchamber. As a woman, I laughed when Ros rubbed it in Theon’s face that Tyrion was, ahem, how shall I say politely – ‘talented’ when it came to certain skills in the boudoir. Theon instantly felt threatened about this – any man that has to put down another instantly shows just how deep his insecurities lay. “I don’t want to pay for it,” whispers Theon. “Then get yourself a wife,” counters Ros. Score 1 for Ros, 0 for Theon.  Theon is always trying to prove that he is a man, that he is the best lover, the best fighter, the best archer. (how about the biggest idiot?) In “The Kingsroad,” Lady Catelyn gathered together with Ser Rodrik, Maester Luwin, her son Robb and Theon, in the Godswood, divulging what her suspicions are, regarding Bran’s accident. Robb, upset over what has happened to Bran, gets angry and states that the Lannisters have done a great injustice by coming to Winterfell, indulging on Stark hospitality, only to try and hurt a member of his family. The first thing that Theon said to Robb – “If it comes to war, you know I’ll fight with you.”  Maester Luwin hit the nail on the head when he counseled, “Too often words of war become acts of war.” How prophetic, considering what we see happening in the second season. 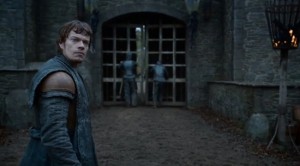 Besides being the ward of Winterfell, we could also add another title: Big man on campus. Really, Theon, where are your brains? More to the point: where is your LOYALTY?! In “The Night Lands,” friendships become a thing of the past and family position becomes very important. So important to Theon, in fact, that he betrays Robb Stark and decides that he has to man up and start acting like a Greyjoy. Geez. Let’s see, a decade with the Starks, a few days with your sister and your father back on the Iron Islands and that is what you want to fashion your life around?! To say that things between Theon and Balon are ‘strained’ is being polite. I just don’t understand why you would want to ruin a solid friendship, all for the sake of trying to impress your father, who you barely know. As if the Iron Islands are on par with Winterfell. Theon has a great deal of anger and resentment and unfortunately, because he is so desperate to be known as the heir to the Iron Islands, he commits stupid, senseless acts of violence. He thinks he’s in control of his own actions but he’s just a little puppet on a string. Dagmar Cleftjaw, the Seabitch crew, Yara, Balon, they all goad him on, needling at his pride until it gets the better of him.

In “The Old Gods and the New,” Bran Stark asks Theon a very blunt question: “Did you hate us the whole time?” once Winterfell has been taken. With no proper reinforcements and not in a position to do anything, the little Lord of Winterfell surrenders the castle to Theon and his crew, thinking it was the safest thing to do. However, ‘Judas’ should be Theon’s middle name and he doesn’t disappoint us. In fact, he horrifies us all with his botched execution of Ser Rodrik Cassel and the massacre of two innocent orphan boys from a farm on Winterfell lands. 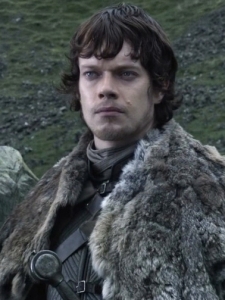 All to save face. Because remember, it’s more important to be cruel then to be kind. It’s really too bad Osha didn’t geld him with her knife or slit his throat when she had the chance. GOD. Talk about a MISSED OPPORTUNITY!

Hey! Remember me?! I’m Theon, the Prince of Pyke! I have to prove myself! Even if it means being a real nasty turd! And backstabbing my best friend! And insulting him by taking his castle and treating his two little brothers like chattel! I have to be curt and not listen to prudent advice from Maester Luwin. (I’m still steamed that in “Valar Morghulis” Maester Luwin died from being lanced by Dagmar and it was all because of Theon getting knocked out). Someone just put this ‘Prince’ out of his misery.

Theon, I hope that you also remembered the Stark’s words: “Winter is coming.” Karma, like winter, always comes around. You’ve been warned, Theon Greyjoy. Watch your back.