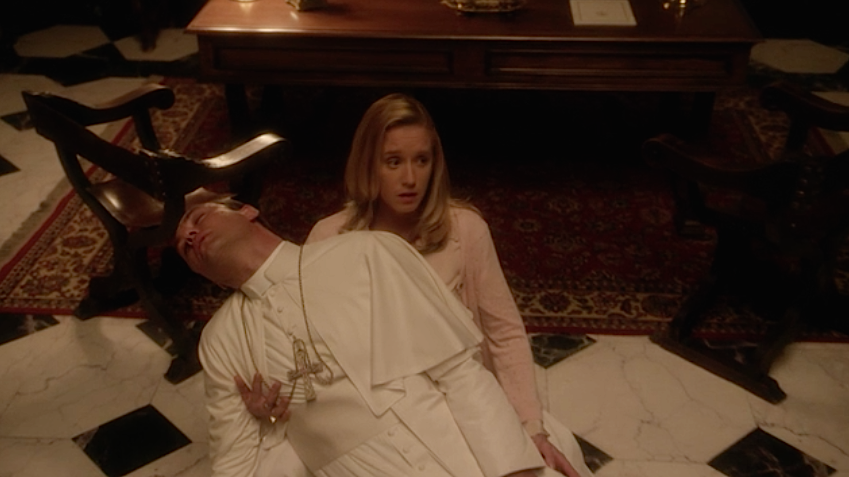 I can’t help but remember where the last episode left us—Lenny the Pope (Jude Law) was joking that he believed in God. Or was he? He prayed hard to become pope—really hard. So hard that he may want to invest in some papal Depends. He is intense. He’s an arrogant jerk one minute, and on his knees shouting to God in prayer the next. He cordially invites you to his office for a friendly visit, then tells you to pick some desolate place to spend the rest of your career, and does it all in the same level tone as though he is picking out new curtains for a random vestibule. He can be abrasive and compassionate at the exact same time. And don’t forget the smoking.

What IS it with all the smoking in this show? My smoke detector starts beeping every time Lenny lights up. Smoking has pretty much been sold to us as evil by the political class, but everybody at the Vatican seems to be doing it in The Young Pope. Our body is a temple according to scripture, yet the leaders of the faith are purposely destroying their own temples, and with extreme prejudice in one case. One cardinal or monsignor was using an oxygen tank with one hand and puffing a cigarette with the other in the premiere. I’m waiting for the pope to show this lack of control over personal desires in other areas, but it hasn’t happened yet.

Cardinal Spencer (James Cromwell) is still crying about not being Pope because that’s what he desired and didn’t get. I’ve had enough of this. All he’s done for three episodes is mope and bark at anyone who comes near him. It was time for him to do his business or get off the pot in episode two, but no, we had to drag this out so we could have a dramatic moment with the senior staffer. James Cromwell has been playing a cranky old man pretty well for a while now; check him out as Andrew W Mellon in HBO’s Boardwalk Empire, and one of my personal favorites, Prince Philip in The Queen.

Nobody is happy with the homily the Pope gave in the last episode, except the lone woman he calls in to visit him from the square. But that was just a dream, or maybe only part of it was. It’s hard to tell in this show like it’s hard to tell whether we’re in the past or present. Her visit has a dreamlike quality to it, and I don’t think he actually passed out, but I can see the Monsignor actually getting fresh with her in the alley like that. Then he’s having a dream about his parents. This is exactly what it’s like being on Ambien. It’s hard to tell where the dream starts and stops.

Speaking of anachronisms, the photography equipment and whatever they’re using as the press room both look very dated. You can google the press office of the Holy See and it does not look anything like the little one room church they’re using in this episode. Sofia has this kind of retro glamour girl hair going on, and the people we encounter who are not from the Vatican seem to be dressed in these 90s throwback clothes. Yet, as Ellie pointed out in her reviews of episodes one and two, there are people using iPhones and texting.

I guess I’m having a little difficulty believing that an American man that age would be wearing the hat that he wears in the garden. On official business, yes, but not in the garden. I understand that he’s not a typical American and that he grew up insulated from most of the cultural influences that I’ve had. However, I just think he would have a baseball hat of some sort. It would probably be something without a logo that the Vatican had specially made for him, but I just don’t see an American in that millinery predecessor of Father Guido Sarducci.

Also, before I forget the press conference, way to go putting your mom, Sister Mary (Diane Keaton), out there with that statement, Lenny. They only have pictures of HER and none of YOU. If the paparazzi chase her down a Paris tunnel, it’s all on YOU, Your Holiness. Idiot.

As the Bishops and Catholics wrangle with the Pope’s homily, Cardinal Voiella’s story about how Lenny was elected changes depending on who is listening. I think we finally got the truth out of him toward the end, though. That got everyone’s attention. But what we really need to discuss here is not the process for getting rid of a cardinal, or yelling at His Holiness. We need to talk about the real elephant in the room.

THE RAISIN THEY SUPERGLUED ON VOIELLA’S FACE IS DRIVING ME UP A WALL. There is no way a doctor would leave that on there! It would have come off in a freak accident by now!

At the end, Lenny the Pope is questioning his own beliefs again. He doesn’t seem any closer to a lack of self-control, but quite a few others do.