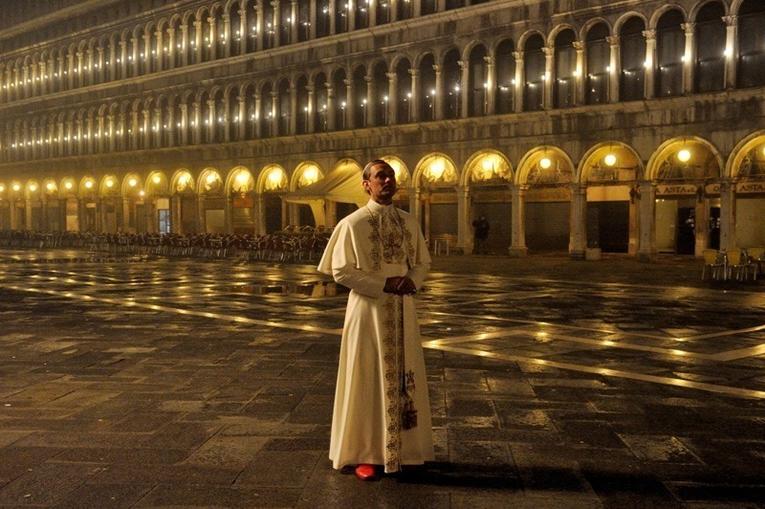 This new series from Academy Award-winning director Paulo Sorrentino sees Jude Law take on an exciting, exhilarating and ecclesiastical new role as the Vatican’s first American pope. The feature-length first episode was an electric, pulsing and deliciously ambiguous cacophony of Catholicism, corruption and unpredictable characters. The season looks set to lure us into its dreamy, imaginative and captivating imagining of life behind the walls of one of the world’s most elusive, criticized and speculated places, The Vatican City.

The tone of what is yet to come is set from the outright, with Pope Pius XIII (Law) dreaming of his first address to the people of Rome where he imagines he tells them that we have forgotten how to play and be happy, we have forgotten how to have sex for pleasure, have abortions, have same-sex relations and how to live guilt free. Obviously, each one of those things being a huge sin under the eye of the Catholic Church, the introduction of our main character was initially a trick. Perhaps alluding to the fact he himself might be a trick. However, our real introduction to Pope Pius XIII, who we shall now just refer to as Lenny, (unless he tells us not to) begins presumably just days after being elected and prior to his first address to his people. 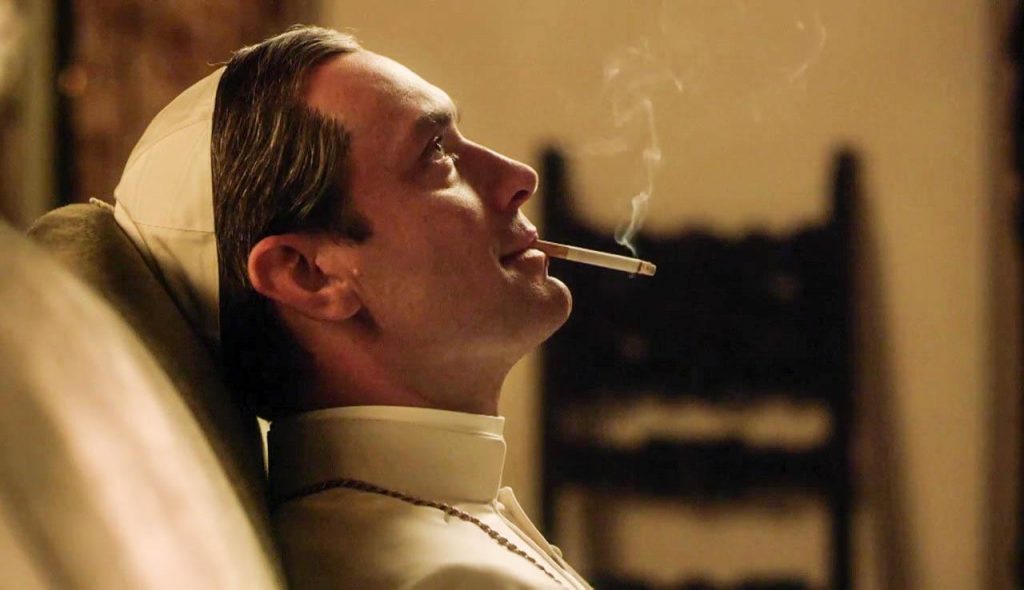 ese words, uttered multiple times offers the idea that Lenny is not convinced of his new stature just yet and the idea that every single Catholic on earth now sits under his leadership. The Pope, historically, has been an old man who is stuffy, solid, a man of the people, a leader for Catholics. The comment from Sister Mary (Diane Keaton) that he is leading 1 billion people or a ‘fifth of the world’s population’ leads to an assumption about when this story is set. The world’s population was at 5 billion between 1987 and 1998, during which time Pope John Paul II was the leader of the Catholic Church so one must presume the setting of this show is in a fictional time, perhaps during the 1990’s, which would be totally believable if the Cardinals’ weren’t texting on iPhones all the time. Who would a Cardinal be texting and what about, anyways? The surrealism is something I will get onto in a bit. So it isn’t obvious what kind of world this story is being set in, if its modern day, the populous is 2 billion less than it actually is and if it is in the 90’s, then iPhones were invented a lot sooner than originally thought. Anyway, this pope, Lenny, is unusual. He is young for a start, he is handsome, he drinks Cherry Coke for breakfast, smokes, changes rules and shares his silly dreams with people. He’s like a rock star in a cassock. It isn’t clear, however, whether or not he is a good person. Yes, he is the Pope, but why? What are his plans for his people? Already he refers to ‘God’s Infinite Silence’ which is the idea that God only speaks and works in silence and there are few who are able to hear him and once in this first episode he makes a joke about not believing in God at all. A Pope who jokes about that? Seems totally ludicrous and leads to the idea that maybe he is questioning of his own election and his own abilities to be the leader of the Catholic church. Perhaps, he cannot hear God at all, but thinks that he should be able to? 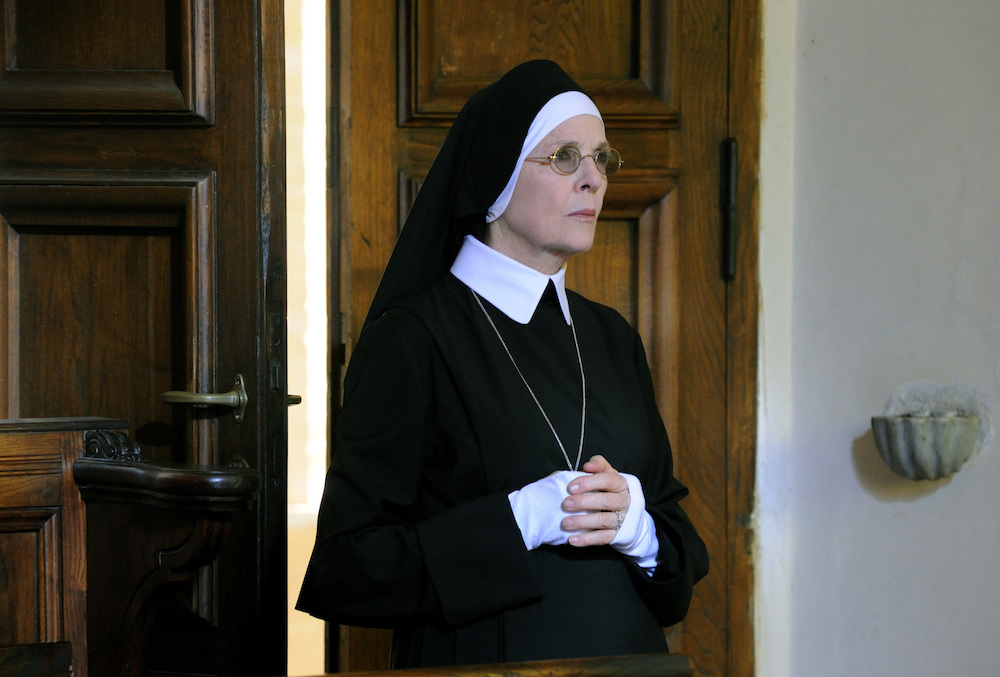 The main focus of this first episode was to show the moments leading up to Lenny’s first address from the St Peters Basilica. From meeting with the Vatican’s very own Marketing person named Sofia (Cecile De France), who brazenly exchanges flirty glances with his holiness, and encourages him on his next steps of going public. However, Lenny doesn’t want his face on plates or t-shirts or key-rings. He doesn’t want to be on the front of newspapers, he doesn’t want anyone to see what he looks like. His justification being that only Christ’s image should exist, and he exists through him. The Catholic people should only have the image of Christ in their mind when they are worshipping or praying to God, not Lenny’s image. He doesn’t want to be the image of the Catholic Church because he doesn’t believe it is necessary. He refers to JD Salinger, Stanley Kubrick and Daft Punk as being the most important people of their craft and never being seen. His intelligence outweighs her and he insults her Harvard education, making it seem like a playful remark, to which she responds with a shy smile. His power is overwhelming on the people around him and he doesn’t seem to have quite realized it yet. That changes, though as the episode goes on. Lenny struggles with the politics that come with the Vatican and the judgment he is facing from Cardinals, who talk about his devotion to the church like it’s a bad thing. His relationship with Sister Mary, who raised him when he was an orphaned child, begins to get strained as she starts discussing plans as if she is also the Pope, using the preface of ‘we’ when reciting orders. The implication here is that Lenny doesn’t fully trust her motives as another boy she also raised is also a Catholic Priest; in his mind, she cannot fully give herself over to just him then.

“Without God, you are as good as dead”

During his address, which takes place at 9:00pm, Lenny stands on the balcony of the St Peters Basilica, shrouded completely in darkness. He takes the speech that has been written for him by Cardinal Voiello (Silvio Orlando) and discards it for a drawing from a child, asking “What do I need to do to believe in God?”He then proceeds to scorn non-believers, telling the thousands of people below that he is not there for them, that they are not worthy of him. He tells them that if they want to find God, they have to look for him in the darkness. Its almost as if he hates people and hates Catholics, like they are a hindrance to his plans for being Pope, but what are those plans? If he isn’t there for the people, why is he there? 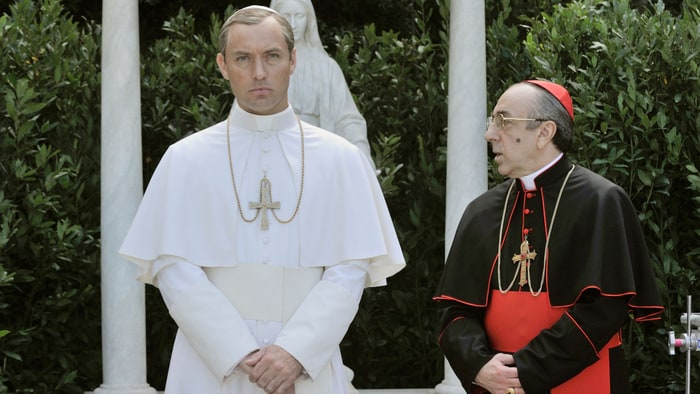 The tone and the pacing of the episode played out like a feature length film. It is very ambiguous, surreal and enchanting all at the same time. The romanticized setting of the grandiose rooms of the Vatican City give it a classical and familiar feel but the electric, vibey music messes with that completely. The music belongs in a trippy Los Angeles nightclub scene, not the Vatican City. The music itself is perhaps alluding to the idea of revolution in the Catholic church, that things are changing, the dust is being blown off, the books are being thrown out the window and the church is entering a new era. The episode played host to some pretty memorable scenes, including nuns playing football to Ave Maria, discovering a Kangaroo locked in a cage which was set free, the Prefect telling Lenny he is a homosexual and then Lenny being called away because his sandwich was ready and finally, Sister Mary’s t-shirt  reading”I’m a virgin but this is an old shirt.”

It is not clear where this story is headed but it looks like Pope Pius XIII first few days as the leader of the Catholic Church has made a big impression on the world.

So what’s the plan, Len? More clarification in “Episode Two.”