New scripted content is starting to arrive on HBO and the proof is in the upcoming limited series THE WHITE LOTUS. We mentioned the work, crafted by Mike White (ENLIGHTENED), back in December of last year. So, this series is one of the first projects to be announced and shot for HBO during the pandemic and therefore able to get in front of our eyes in 2021. We already listed the cast for the show which takes place in a resort in Hawaii named The White Lotus but not anything about the characters so here, via a press release, is what we know about them and when we can see them on HBO. 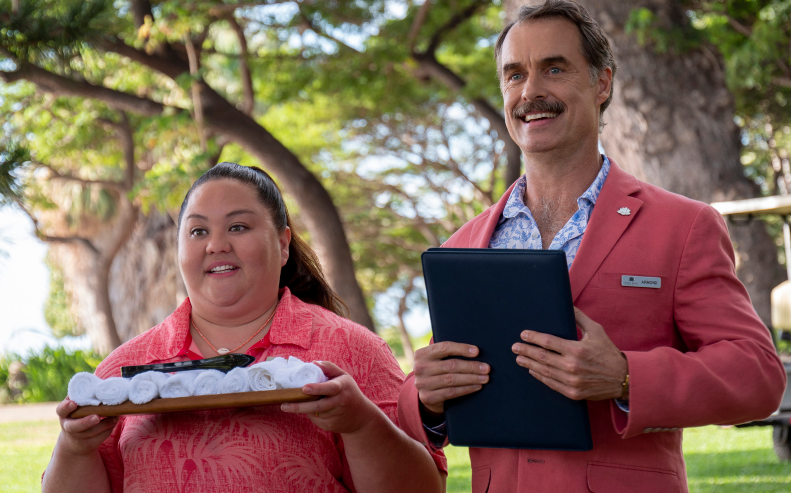 The series, which debuts SUNDAY JULY 11 (9:00-10:00pm ET/PT), follows the vacations of various hotel guests over the span of a week as they relax and rejuvenate in paradise. But with each passing day, a darker complexity emerges in these picture-perfect travelers, the hotel’s cheerful employees and the idyllic locale itself.

Among the employees at The White Lotus are the fastidious resort manager Armond (Murray Bartlett; pictured above), who, after a sudden trauma, begins a dramatic downward spiral – and the down-to-earth spa manager, Belinda (Natasha Rothwell) who gets taken on an emotional roller coaster ride by a needy guest. 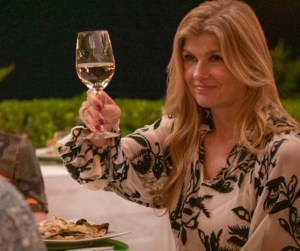 Also, as part of the staff, are characters played by Jolene Purdy (pictured above), Jon Gries, Kekoa Kekumano and Lukas Gage. The vacationers include the Mossbacher family – Nicole (Connie Britton; pictured), a successful type-A exec, who can’t help but treat her family like disobedient employees; her husband, Mark (Steve Zahn), dealing with both an embarrassing health crisis and a terminal inferiority complex; their teenaged son, Quinn (Fred Hechinger), a socially awkward gamer, experiencing the wonder of nature for the very first time; their daughter, Olivia (Sydney Sweeney), and her friend, Paula (Brittany O’Grady), sharp-tongued college sophomores who cast a sardonic eye on the lifestyles and belief systems of everyone around them. The handsome, entitled Shane Patton (Jake Lacy) is here with his beautiful bride, Rachel (Alexandra Daddario).  Shane and Rachel are in the throes of young love, but as they get to know each other better in this new, intimate environment, clouds of doubt appear – and by the time Shane’s intrusive mother, Kitty (Molly Shannon) surprises them with an unwelcome visit, their fairytale honeymoon has begun to unravel. And finally, there is Tanya McQuoid (Jennifer Coolidge), a wealthy, unstable woman, recovering from the death of her mother, traveling alone to the hotel, looking for love and in desperate need of a massage.

Even though the series is a limited six-episode run doesn’t mean that new guests with new circumstances could not appear for subsequent but brief seasons. But that would mean strong story arcs for the staffing of the resort who would be the consistent characters of the project. THE WHITE LOTUS, which was filmed at an actual locale in Maui, Hawaii, must have been shut down due to the pandemic giving White and company exclusive use and safety for the shoot. Just how bad was COVID-19 on the island state anyway?

As it is coming our way in July, we should see a trailer drop within the next month which leads to a bit of a curiosity at this point. Just what is the tone & pace of the show? Note that this is not a half-hour comedic bit but a full hour each week. I guess we will get the answer soon enough. So, are you going to check into THE WHITE LOTUS with us come July 11? Feel free to let us know in the comments below. Aloha! 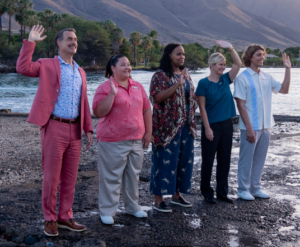