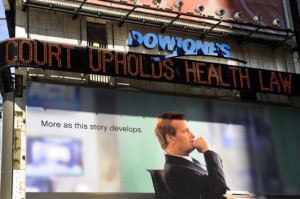 Adam takes a look at the first five episodes of HBO’s The Newsroom.  For a different take on the series read Charlie’s recent article on a similar topic.  Please leave your own thoughts below and add to the conversation!

Only six episodes into its premier season, Aaron Sorkin’s newest project, The Newsroom, has seen its fair share of praise and critique from just about every modern level of discerning eye there is. This level of attention speaks to a heavy burden the show had coming out of its gate to be more than what it is, to recreate a magic Sorkinites (Sorkinans?) thought lost with the passing of The West Wing. Much fervor has been made over the most basic elements of the show, many of which this writer agrees with. The dialogue is at times too quick to be believable and too witty for its own good, the romantic subplots are wedged into each episode with a hammer, the reporting of past events arguably turns the show into Sorkin’s personal moral soapbox with the advantage of 20/20 hindsight, and his depiction of women has yet to really shine. However, above all that I believe the show has positioned itself to perform an important role for both its audience and the modern news media, one that sheds light on not just the hidden world behind every good news man and woman but also the many ugly truths that hinder our media and distort what eventually arrives on our television sets and our computer screens. 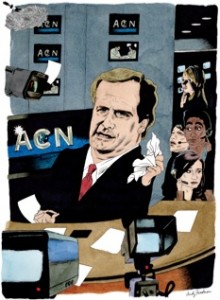 In crafting a series depicting a fictional news show, there are some obvious notes one would have to hit along the way. The formation, the day to day process, the Big Scoop, the Heart-Breaking Disaster (natural or man-made), and obvious internal struggles that ensue, probably between reporting the news and reporting the Truth. These notes would play out as story arcs in the series for the characters to wrestle over and eventually have some equally fictitious, feel-good solution or resolution (see The West Wing‘s Israel-Palestine peace process arc). In five episodes, The Newsroom has already touched upon a lot of the big issues that plague television media and it feels as if these issues may not be forming simple story arcs but core antagonists to our plucky young news team. In the second episode alone both Will McAvoy and Charlie Skinner get lectures from Reese on how ratings should drive content (“That’s ratings driving content.” “That’s just reality.” – “We’re not setting out to lose viewers.” “No one ever does.”). There’s also a quick comment on “bias towards fairness” which is exactly the sort of wishy-washy news coverage that the new News Night is trying not to succumb to and will no doubt continue to struggle with in coming episodes.

By the third episode we’re already getting a glimpse into the power structures of the ACN network, the ominous sounding ’44th Floor’, and how corporate power influences the programming we see through the chain of command. When Leona Lansing says “I have business in front of this Congress” she is not only laying bare how the news and people’s perception of the news resonates into the halls of power but is also making a succulent point on how much back-scratching these power structures are built upon (we see how the news is beholden to power and experts in the previous episode when the team is cut off from Governor Jan Brewer’s office with disastrous results). The fourth episode puts their anti-bias towards fairness doctrine into play with a segment on Barack Obama’s second amendment record while also showing the parallels and friction between news and “entertainment” journalism. And the latest episode tackles what one could call the edge of journalism, where information curdles and resides in places that may be too dangerous to extract it from, and how the need to have the latest Up-To-The-Minute information in our 24-hour news cycle is increasingly putting lives at risk. 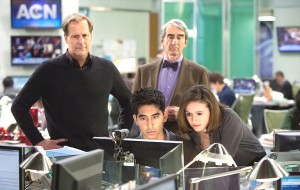 To the well informed internet-saavy people of today (yes, you) none of this is new. All are themes that have made themselves self-evident due to how the internet acts as a magnifying glass over our modern society, but not everyone has access to the same information. The people in the know about these issues do not form the broad demographic of HBO or of the people who watch The Newsroom. Aaron Sorkin is a man who very much wants to return to a classical, romanticized version of the past where the audience could trust the man in their television set to bring them the evening news without slant, without obstruction, without drowning out importance in irrelevance. Whether such a time ever existed is a debate for another page, but Sorkin knows that this kind of transparency, an acknowledgment of the current problems and a move towards fixing them, is not going to come from the big news networks of CNN, MSNBC, CBS, or Fox, but only from the fictional realm, which has always been the safe harbor of criticism (lets state facts, The Newsroom is on HBO because no other network would run something that is so self-scathing in its very nature). In a day and age where the most hard hitting political interviews comes from comedic programs like The Daily Show (see Jon Stewart’s interviews with Mike Huckbee and John Yoo among others) than maybe a fictional news program can perform a role actual news programs cannot or will not.

If Sorkin believes that The Newsroom is depicting superheroes that don’t wear capes or disguises than the best (and rather timely) analogy would be that Sorkin is setting up Will McAvoy as Batman to the media’s Gotham. By setting News Night against these ugly truths he exposes them and has the potential to reach out to a wider audience who is unaware of these issues and make them question how exactly our corporate media apparatus works. One can only hope that by the end of the first season, discussion around The Newsroom won’t be stuck in the mud about its snappy dialogue, bombastic characters, or where James and Maggie are at relationship-wise, but on the real concerns its throwing in our face. 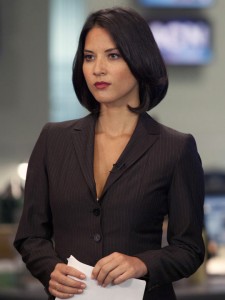 The only question remains is to what breadth Sorkin will take the show. Again, hitting at a lot of these core concerns early on ¨C ratings driving content, bias towards fairness, corporate influence ¨C seems to be setting them up as persistent obstacles along the way instead of just throwaway concerns, and with this latest episode we’re already getting hints at some behind the scenes scheming to push McAvoy and his show towards failure, but where can it be taken from here? The show has done a good job of highlighting the Koch brothers’ influence in politics and has name dropped both the Citizens United ruling and a number of actual Political Action Committees through which these kinds of influence work and that kind of info-dumping, if you will, while blatant, needs to continue.

It will be interesting to see how the show handles a millionaire conservative news anchor reporting on the Occupy Wall Street protests, and if there’s any internal struggle to be had, it will be between the older generation he and Charlie represent and the younger news staff who may want to shed more light on it than McAvoy thinks would be permissible. 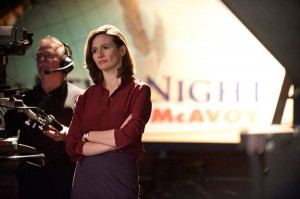 Shooting down hypocrisy in Republican targets is easy, but will the show turn its eye towards the Democrats, who have had just as much controversy and are as complicit in our modern state of affairs as their red-tied compadres across the aisle? We’ve also received bits of education on complex economic issues, such as prosecuting financial crime and Sloan literally lecturing Mackenzie on the Glass-Steagall Act. Much in the same way that The Newsroom reveals the hidden world of the media, it can also reveal the hidden details to news stories we didn’t get, the kinds of details that get pushed to the side for being too muddled or, frankly, too controversial. And with the way the show as been burning through lengths of time, one wonders if it will end up hitting the modern day quicker than expected.

The show has its flaws on a surface level, but if you’re watching carefully, then you should be applauding what’s submerged beneath, and hooking anyone and everyone you can onto it before it gets lost in the rain.