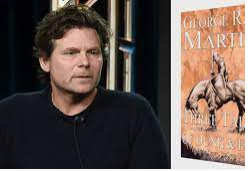 That title, which would be an adaptation of George R. R. Martin’s Tales of Dunk & Egg novellas, is said to be in development with Steve Conrad (pictured) as head writer and executive producer for a potential prequel series. Conrad has already held those same titles for such works as Ultra City Smiths, Perpetual Grace, LTD and Patriot, all series, and movies like Wonder, The Secret Life of Walter Mitty, and The Weather Man with Nicolas Cage.

Around here we’ve been pondering the notion that this concept could be a viable choice for adaptation for quite a while. In fact, HBOWatch’s first whisperings about it were way back in 2012. We mentioned it again in 2016 and yet again earlier just this year. But still no official word. And even though Conrad has been cited as now writing scripts about Dunk (Ser Duncan the Tall) and Egg (the future king Aegon V. Taregaryen) HBO still is silent.

Why is that? Well, we have all seen across the internet how HBO sunk over $30 million into the failed GOT title with Naomi Watt. It doesn’t want to repeat that sort of behavior certainly. So, perhaps before it says and promises anything HBO needs to be certain that the Dunk & Egg tales can be told. Good, solid scripts and production plans will clearly aid them in their decision on how much it might cost and whether it should get a green light or not.

Only time will tell. I swear this is the last time I write or approve anyone else here to write about this title. The next time we do so will not be to speculate on its potential as an HBO series but to say it has been nixed or has finally, officially, gone to series.