Following last week’s devastating verdict, Michael Peterson (Colin Firth) now faces spending the rest of his life behind bars after a jury ruled him guilty of murdering his wife, Kathleen (Toni Collette), by pushing her down the stairs. The state’s case against him was too compelling, with the post-mortem coming back as a likely assault, the wounds and blood spatter being matched to a likely assault and the motive of Kathleen discovering Michael’s affairs, there doesn’t seem to be enough to prove otherwise. However, David Rudolph is convinced he can get Michael a retrial and it is the possibility of this that keeps him going through some dark days in prison. 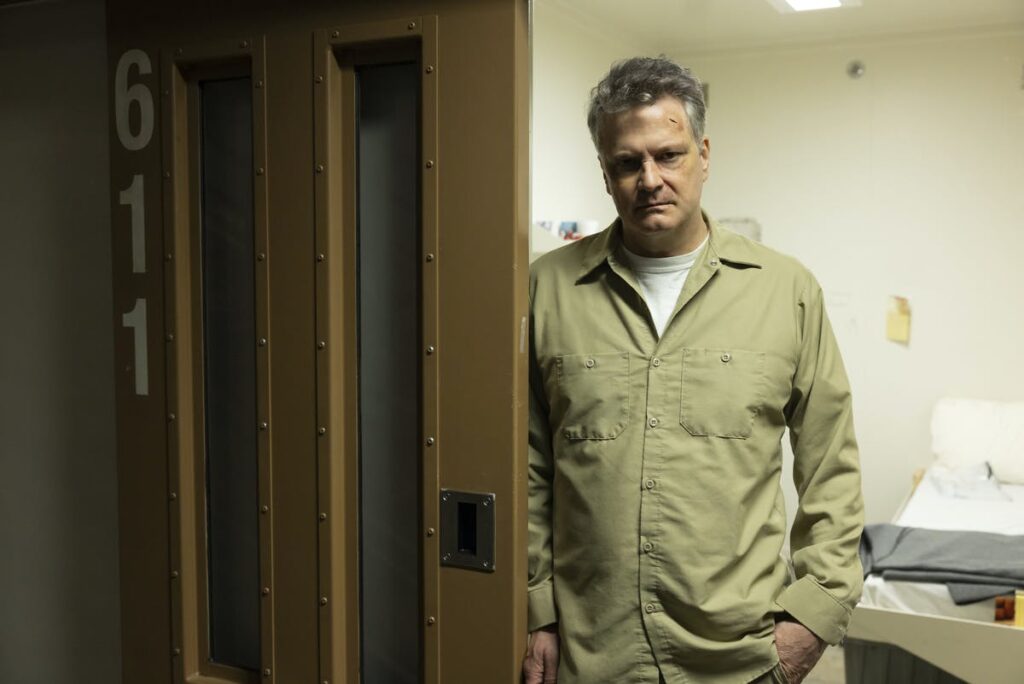 These two episodes are definitely two of the strongest so far, possibly in part to having no influence from the documentary. Michael’s time in prison was not part of the documentary series so this is up to the creatives behind each episode to depict based on Michael’s accounts of what happened inside. Despite being a highly educated man from a privileged background, Michael is just another man behind bars and he is very quickly singled out by a gang. He doesn’t have any protection at all and its doesn’t take long for his vulnerability to become apparent making him a very easy target for beatings. He speaks to Big Ray (Samuel Ray Gates) who has shown him some kindness and learns that stamps are currency in prison and if he can provide weekly stamps to someone, he will be protected by them. At the moment, he can afford to do this and gets his son, Todd (Patrick Schwarzenegger), to make sure there are plenty of stamps in his weekly delivery. He doesn’t think he will have to do this for long because he believes a retrial is on the horizon and he will be in the comfort of his own home once more.

Meanwhile, the documentarians are facing their own dilemmas. Sophie (Juliette Binoche) has declared to her colleagues that she is in regular communication with Michael in prison, she writes to him and sends him books to read. This compromises her position as editor into editing something non-bias as she firmly believes that Michael is innocent. The butting of heads between the director, editor and producer are very interesting as they each have their own motive behind the success of the documentary. The director, Jean-Xavier (Vincent Vermignon), wants to tell a story of the American Justice System using Michael’s case and wants to present a non-bias depiction of his story and the case against him. The producer, Denis (Frank Feys), wants to make sure that the documentary is successful and doesn’t really care what has to be done to make that possible but it needs to be compelling and interesting to the viewer and finally, Sophie, who’s motives are unclear but are definitely compromised by her feelings for Michael. Sophie wants to leave out footage from the courtroom which discusses the fractured cartilage in Kathleen’s neck as she doesn’t believe it contributes to the overarching case, however Denis strongly disagrees and says it needs to be included. Sophie instead wants to include a heartfelt conversation between Michael and his eldest son, Clayton. Jean-Xavier agrees with Sophie, that it’s important to present to the audience a depiction of who Michael is as a person to better understand him, which results in an explosive argument between Jean-Xavier and Denis, with Sophie caught in the middle. 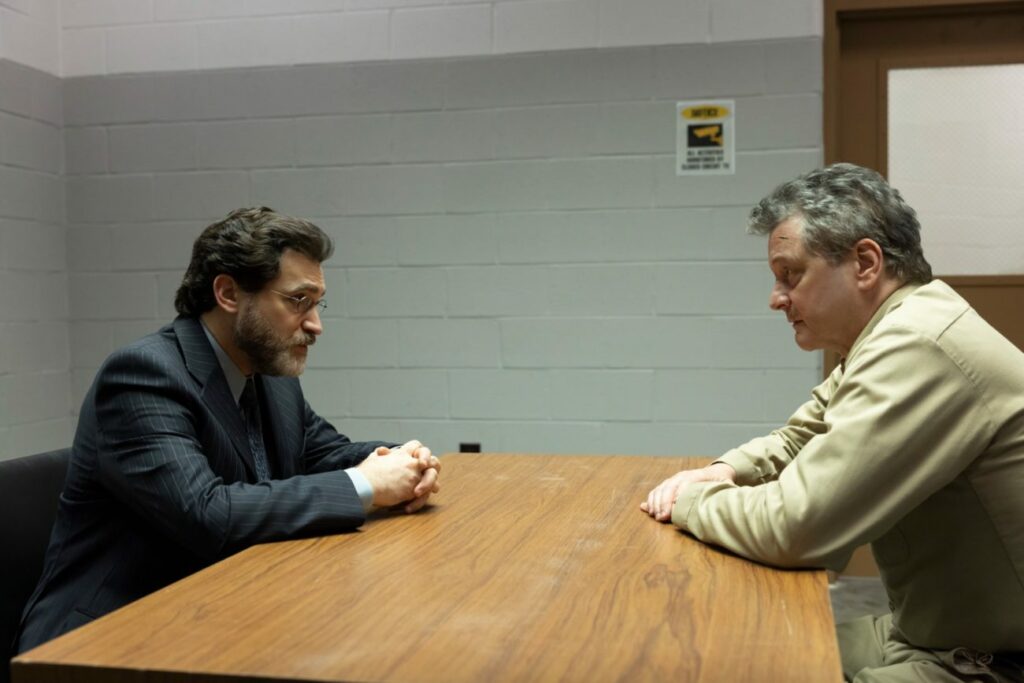 Unfortunately for Michael, he discovers that both his appeals for a retrial have been denied, meaning that he is looking at a long, indefinite stretch of time behind bars. With his house and all his possession having been sold by his children to keep up with lawyer fees and funding his time in prison, there isn’t anything left for him to return to even if he did get out. In the two years it’s taken to reach this point, Margaret, Martha, Todd and Clayton are all moving on with their lives. Each of them finds employment, starting families or moving out of state to start anew. Sophie is the only one who moves in the opposite direction, finding permanent accommodation in Durham and regularly visiting Michael in prison. This is portrayed so excellently by Colin Firth, we are used to seeing Michael Peterson as the big personality man, the pipe-smoking patriarch of an unconventional family, the man who ran for City Council, the star of a new documentary series, the adopted father of two orphans. But now he is broken and vulnerable. He has lost pretty much everything and now his children are moving on with their lives too, leaving him behind, to see out his life in prison.

The final and most compelling aspect of these two episodes is the surprising new theory for how Kathleen died, presented by Larry (Joel McKinnon Miller), the Peterson’s neighbour. Larry, a bird and wildlife enthusiast, meets with Sophie upon his request and explains to her his theory that Kathleen was attacked by an owl. Initial reactions to such a notion are likely to be ones of dismissal, but he presents a rather undeniable case. For example, it wasn’t made known until now that Kathleen’s blood was found outside the front of the house and on the front door? 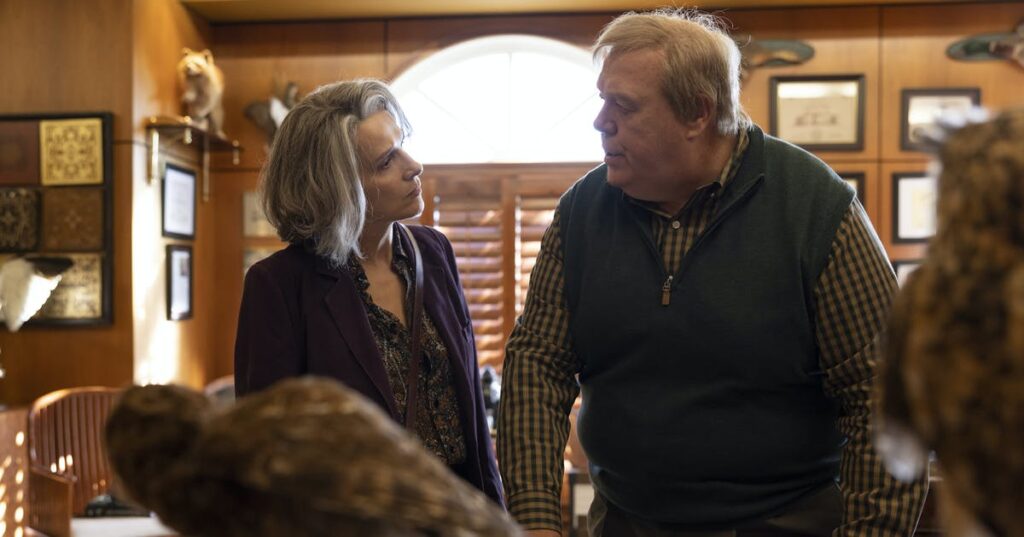 Or that feathers were found in Kathleen’s hair? If Michael had pushed Kathleen down the stairs and bludgeoned her to death at the bottom, why would there be blood by the front door? The feathers could be attributed to pillows or cushions, but unless they can exhume Kathleen’s body (something that was immediately dismissed by her next of kin and an only biological daughter, Caitlin) there isn’t any way of knowing if these feathers belonged to an owl or not. Larry explains further that owl attacks are actually not as uncommon as you’d think. He presents the theory that Kathleen, before going to bed, put the two reindeer Christmas decorations on the front lawn and as she was doing so, an owl swooped down and clawed her scalp. Delirious and in pain she stumbles inside looking for Michael and heads upstairs where she stumbles and falls, the rest we know. Is it so crazy that a man is spending his life in prison for a murder that was actually a freak animal attack? For this family, no, it isn’t that crazy.

The Staircase is available to stream on HBO Max now!