The Gemstone family have landed with a bang as episode one introduces us to each family member and goes in hard on character development. In the hour-long series premiere, we are also given some pretty major plot points and a startling glimpse into the inner workings of the televangelist family. Danny McBride, Jody Hill and David Gordon Green pull it out the bag once again with an explosive, unpredictable, hilarious and depressing opener that has already put it on a par with the trio’s previous works Eastbound and Down and Vice Principals. 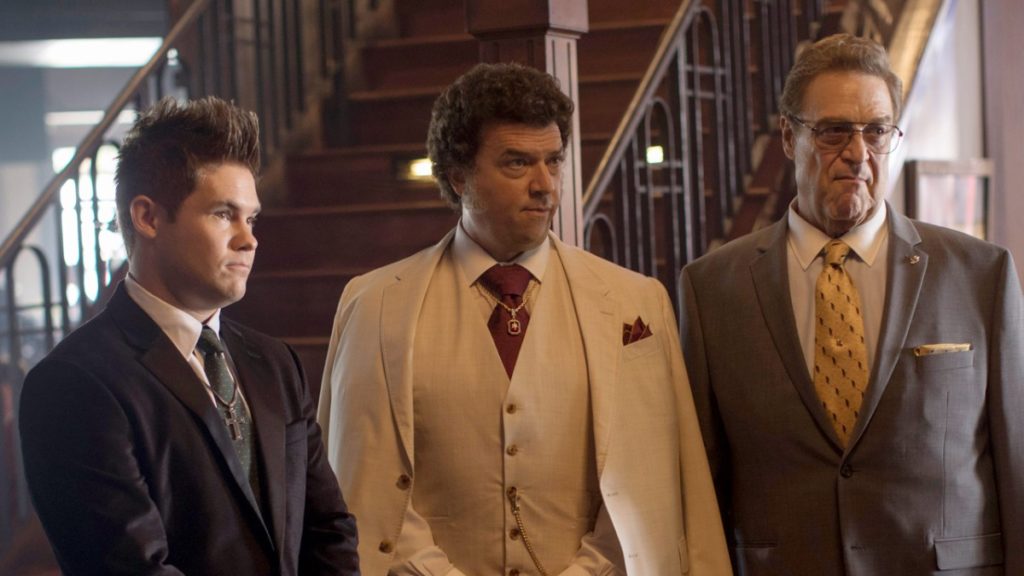 The Righteous Gemstones seems hell-bent on sharing a very particular viewpoint in regard to its subject matter. It starts off hard and heavy by shining a light on corruption within religion, the greed of the elite and the almost cult-like following certain televangelists will have. The Gemstone family live like rock stars, they have private jets, personal jeeps, security, bodyguards, their own compound complete with a theme park, shooting range and each family member’s own personal mansion. They have a following of millions and rake in money from the congregation by the thousands every week. They build massive churches and centers for their huge stage shows and followers. But, as this first episode has shown us, these are not good Christian people.

The first one focused largely on Jesse (Danny McBride), Kelvin (Adam DeVine) and Judy (Edi Patterson), the three Gemstone children. We see the brotherly bond between Jesse and Kelvin, a bond that means they’re always in competition with each other for their father’s approval but a bond that also means they’re there for each other no matter what. Kelvin lives with former Satanist Keefe (Tony Cavalero). Keefe has a  calm and placid demeanor which makes him feel somewhat creepy and possibly menacing; maybe it’s the gigantic ‘666’ tattoo on his chest. Kelvin is clearly very lonely and under all the bravado, fancy clothes and retro video games he just wants to be accepted and trusted by his father to have more responsibility in the family. There is a feeling that he is very much second best to Jesse. 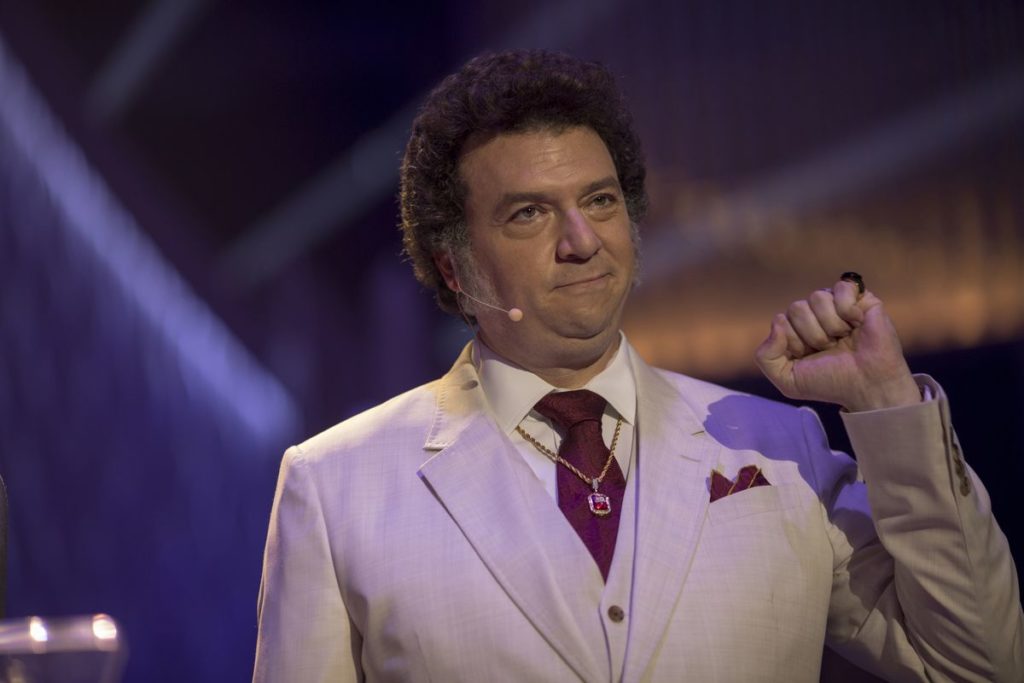 Jesse lives with his wife and two children, Pontius and Abraham. The religious connotation of the names of these children feels significant. Pontius Pilate is the official who ordered Jesus’ crucifixion and the Prophet Abraham almost sacrificed his son, Isaac, to the Lord as a test of faith. Jesse has another son, Gideon, who we are yet to meet and is no longer part of the Gemstone family. It is unclear why this is but it certainly isn’t a good thing judging by the way in which Jesse reacts to his name being spoken. Gideon’s bible story is that he was asked by God to save the people of Israel by leading them in a fight against the Midianites. The Midianites are descendants from Midian, a son of Abraham. This in itself poses some interesting potential conflict, perhaps hinting at a rift between Gideon and Abraham and that being the reason Gideon is no longer in the family, or perhaps a foreshadowing of things to come.  Jesse’s dutiful wife, Amber, (Cassidy Freeman) could provide some interesting secondary narratives as she is something of a Queen Bee amongst her friendship group even though they clearly all hate her. 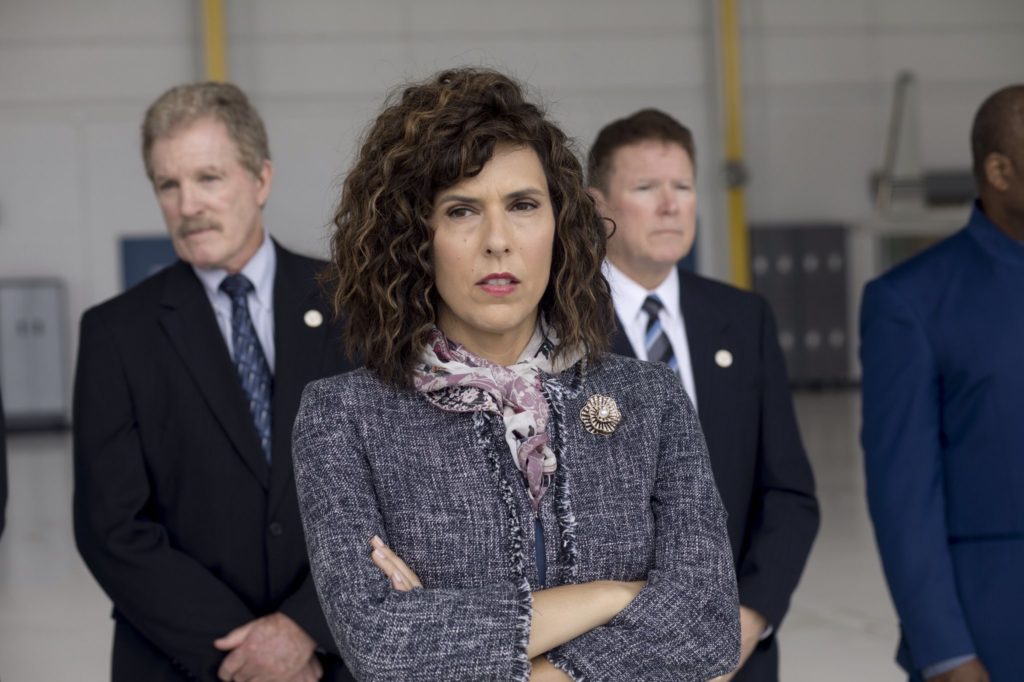 Finally Judy. Judy could be the absolute heart of this show. She is the only daughter of Eli Gemstone and as a woman she is not allowed out on any of the missions nor is she involved in the stage show. She takes care of all the administration and is essentially their secretary. Judy hates this, she hates that she is treated differently for being a woman and is desperate to be included like her brothers. This old fashioned mentality is something that religion itself is very behind in so it’s great that it has been included. Judy could become unhinged especially by the way in which she is treated by her family. However, when she is called upon to save Jesse from a career ruining video being released she doesn’t hesitate to step up.

McBride has said from the start that his work is always heavily focused on characters and placing them in a setting the allows for them to be tested. He manages to create the flawed, detestable characters that we want to succeed and we want to do well. Because despite their vulgarities you can see the good in them deep down. Jesse Gemstone is a deeply flawed and corrupted character. He leads a highly sinful life. Eli Gemstone (John Goodman) is greedy and uncaring to neighboring congregations that his new church is going to destroy. Kelvin and Judy are much more innocent but are so quick to get Jesse out of trouble that they end up embroiling themselves in an outrageous crime. 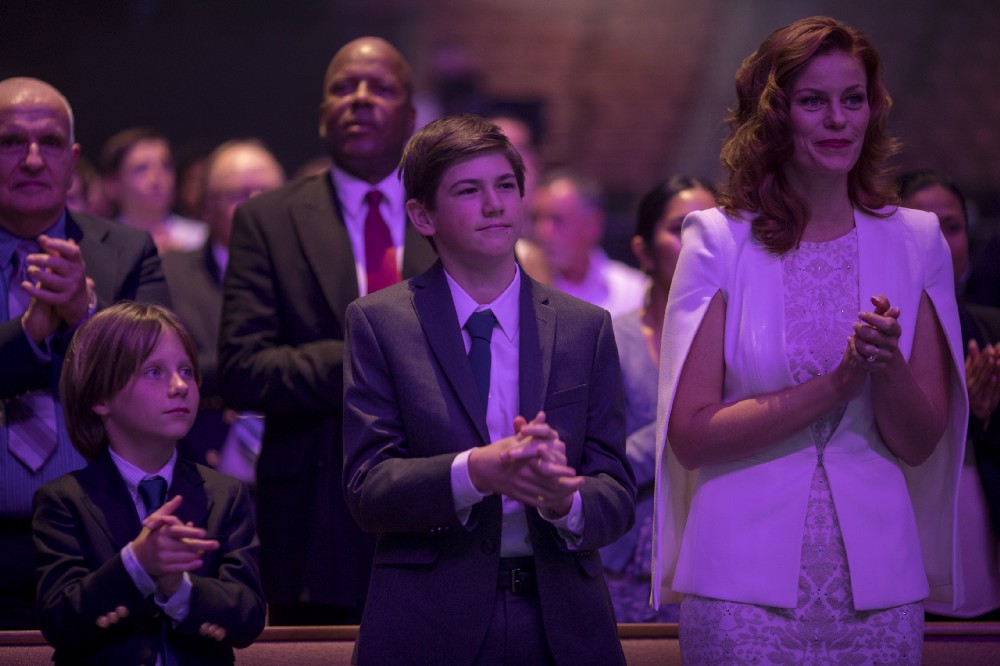 With some significant conflict already at play from the get-go, The Righteous Gemstones feels like it has so much room to really explore and exploit the absurdity of televangelists. There is some interesting development ahead with the Pastors from neighboring churches to Eli’s new build who strongly oppose its development due to the effect it will have on their own congregations. Eli clearly has an incredibly evil, manipulative element to his personality which started to creep out in this episode and there is a feeling that after losing his wife he may well be suffering more than the rest of the family care to realize. Of course, there is the biggest and most significant plot point that Jesse, Kelvin and Judy murdered two men in a parking lot.! The two men were blackmailing Jesse for $1m for a video of him doing drugs with prostitutes. You would think that that amount of money wouldn’t mean much to a family like the Gemstones, especially when it is revealed that Judy has a stash of that amount (probably more) in one of the kindergarten classes in the Salvation Center. However, this merely highlights how tight of a hold Eli Gemstone has on his legacy and how little the Gemstone children are allowed within sniffing distance of any of it.

The Righteous Gemstones shows McBride, Hill and Green at the top of their game with a subject matter that is really allowing them to spread their wings. Initial critical responses have been largely positive and with a bigger budget, bigger cast and the whole of Christianity at their disposal it is likely that the story is going to be nothing we could even imagine.

Prepare ye the way with the following clip & if you want the trailer again find it here.