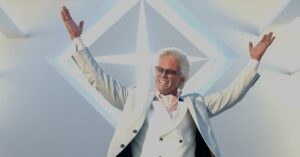 As if Edi Patterson wasn’t already taking centre stage, this week’s episode is all Judy as she corrals both Gemstones and in-laws for her beloved BJ’s baptism. Out of positively nowhere is also the unceremonious but more than welcome return of Baby Billy (the impeccable Walton Goggins) who seemingly has seen it fitting to return to the Gemstone fold to perform at the ceremony – a rare appearance after his return to Christian radio fame in the first season. Of course, he brings with him in tow perhaps the most undervalued character in the show – young Tiff, who is now fascinatingly pregnant and distressingly short of Funyuns.

Similar to the season intro, Episode Four’s cold open featured a flashback, this time to Christmas 1993 to shine further light on Baby Billy and a key event that would come to shape him and the way in which he is regarded by his family. Seen to be a doting and genuinely loving father to the humpbacked Harmon, he then proceeds to walk out on wife and son alike, never to be heard from again – at least by them. As the episode returns to the present time, themes of second chances and rebirth are abound, as Billy is reintroduced on the cusp of a new addition to his new family, with the opportunity to do it right, while BJ is flamboyantly ever closer to being (at least what he hopes) truly accepted as a member of the Gemstone clan. 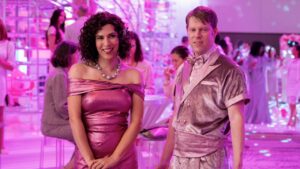 In true McBride fashion going back a decade, there simply cannot be an attempt at a joyous event – in this case, a baptism afterparty – whereby horrendous and awkward confrontation cannot ensue. Step forward, Judy Gemstone, who against her better wishes, has allowed BJ’s agnostic family to be part of the special day, which, before a word of dialogue is uttered, is utter genius plot placement based on their lack of religion alone. Throw in BJ’s outspoken sister sporting physical resemblances to Judy herself, and the stage is well and truly set. Judy never lets her protective, jealous guard down to a fault, but unfortunately for BJ, it is he himself who flusters so aggressively as to bring the celebration to a halt, resulting in Eli storming out.

John Goodman, it should be added, is phenomenal in this season, thanks largely to his character having a lot more to do. With Junior (Eric Roberts) having declared himself an enemy, and with a wake of recent death at his doorstep, not to mention each of his deluded children commanding further access to his finances, Eli is a man on the edge whose reawakening of his past, violent self has him on the edge of breaking point. Having cancelled Kelvin’s God Squad trip to Israel at the last minute nand insisting he attend BJ’s special morning, thus undermining him in front of his hench friends, there was always going be publically taken issue by Kelvin himself. It’s just that he picked entirely the wrong moment, choosing to physically engage with his father. This goes horribly wrong, and will only drive further wedges between a father and his children, where, if the final sequence of the episode is anything to go by, they will need to quickly unify in order to overcome the threat to their empire. 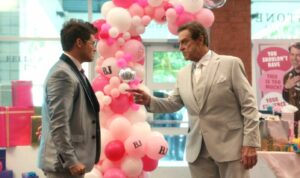 In childish response to Eli turning Jesse and Amber down with regards to investing in the Lisson resort, the pair hijack luxury transport booked for Eli in an effort to make their way home from the baptism. As they stop for gas, they are set upon by motorcyclist gunmen who tear through the bus with a flurry of bullets. Safe and sound, for now, but clearly an aggravated attempt on Eli’s life, the murky southern underworld tones begin to bubble further as past lives become more determined than ever to catch up with the ruthless patriarch.

The Righteous Gemstones continues on Sundays on HBO.