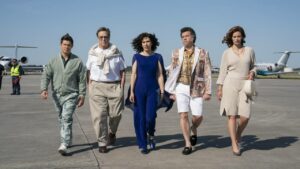 Praise Be! The wait is finally over. HBO’s criminally underappreciated and underwatched big budget comedy caper returned this past weekend in feature length fashion debuting the first two episodes of it’s second season. Given that the previous season’s finale aired in October 2019, 80 fresh minutes in the company of the Gemstone clan is more than welcome, and by its conclusion, it is difficult not to be newly enraptured in the throes of America’s most heavenly family.

To preface is just to reiterate, this show is sensational. It is appallingly funny, expertly cast, and necessarily biting in its use of an extravagant attack on modern televangelism as the backdrop for the increasingly Goodfellas-esque family drama. To say that this is a show rooted in organised crime might be a step too far, but it’s tantalisingly close and leans into the genre tropes even whilst being the most openly daft project from Danny McBride, David Gordon Green and Jody Hill so far – having previously earned their HBO keep with Eastbound and Down and Vice Principals.

Season two picks up where season one left off with internal family politics playing out as the power struggle for organisational inheritance continues. A fully in form (and so far, far more present) John Goodman quickly takes centre stage as patriarch Eli Gemstone, and in a season cold open, a flashback to his younger years reveals the character’s violent history as an amateur wrestler and part time lackey to an as-yet undetermined secular father figure (think Matt Damon to Jack Nicholson in The Departed, for one). How this may affect the core story is anybody’s guess, but it certainly suggests significantly more to the character and how he came to be. 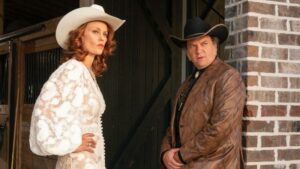 Back in the Covid-era present (the subtle nods are some of the episode’s funniest moments), rivalry continues as McBride’s Jesse naturally leads the charge towards the adoption of Eli’s reins. While Edi Patterson’s Judy and Adam Devine’s Kelvin may stake an amusing claim, Jesse is the obvious choice as evidenced by his early season ambition to not simply rest on what are already very comfortable laurels. If the Gemstones dominate the eastern market, Eric Andre’s Lissons most certainly dominate the west. An invitation is extended that would see them combine forces, with a little help of Joe Jonas apparently, to invest in a multimillion dollar Christian-themed beachfront resort. Jesse and Amber are more than keen, seeing nothing but a guaranteed return on their investment…if they are able to raise the required start up capital of $10m which they don’t have, and which Eli is reluctant to front.

While household names like Goodman and McBride may always be at the forefront, supporting talent should not be overlooked. So far, Adam Devine hasn’t had all that much to play up to, though Kelvin’s overtly homoerotic God Squad (they’re healthy!) is sure to produce entertainment (and…protection?!) as the season progresses. It’s Edi Patterson, though, who steals every single frame she’s in, even when going toe to toe with a powerhouse like McBride. She manages to maintain such an intense, but finely balanced keel that seems to consist of insecurity, unbridled confidence, immaturity and an almost drunkenness that is endless fun to watch. 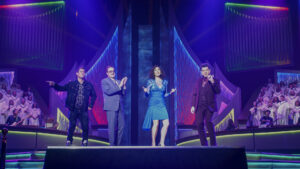 Toss in so far seemingly important (who knows how brief) cameos from Jason Schwartzman and Eric Roberts, and within 80 minutes, it’s difficult not to be deep rooted back in Gemstone America. If you needed more persuading, the opening proceedings may or may not culminate in a triple homicide. Either way (it does), it is more than worth your time, and an excuse to revisit a riotous season one to boot. Long live the riotous Gemstones.

The Righteous Gemstones is currently airing Sunday nights on HBO.