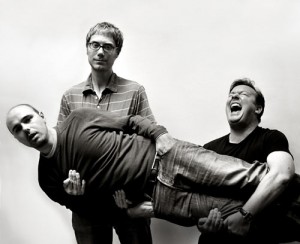 The Ricky Gervais Show, the animated comedy series based on the record-breaking podcast, returns to HBO for its 13-episode third season FRIDAY, APRIL 20 (9:00-9:30 p.m. ET/PT), with other new episodes debuting subsequent Fridays at the same time.  The voices are recorded by Ricky Gervais, his longtime collaborator, Stephen Merchant, and Gervais’ colleague and friend, Karl Pilkington, whose offbeat musings inspire many of the storylines.

The Ricky Gervais Show animates the podcast that first appeared on the Guardian website, subsequently earning a spot in the Guinness Book of World Records for the most downloads.  In March 2011, the podcast reportedly passed the 300 million download mark.

We should be seeing material from the new season out of HBO any day now so we’ll post that here when we get it!