And so it begins. Sunday, April 22 at 9:00pm ET is the debut of WESTWORLD Season Two and we are warned that chaos is in control.

Just by the casting listing alone, we learn some insight. For example, we learn that actors of Asian lineage are making Oriental characters come to life; that Herthum returns as Dolores’s father comes back online and that Armistice & Hector survive the slaughter we saw them embroiled in at the end of last season. We also will witness flashbacks again if Barnes and Simpson are back as Logan & William. There are even more clues as to what to expect as we look at the trailer one more time.

Just some tidbits here to note: Bernard is with the Humans, not the Hosts; Dolores has feelings for Teddy and Bernard/Arnold; Maeve enters Samurai World and finds her daughter; large strike forces on both sides are on the move. Oh, and a dangerous Host Mold (is that what we call it?) factors in as well. Need more insight? 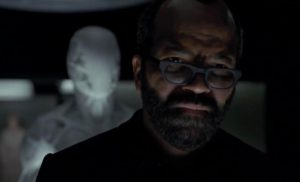 The title refers back to the name of the new narrative announced by Ford in the last episode of last season.

The above question seems to be telling us that there is still quite a bit to learn via flashbacks to earlier times in the Park.

The title translates into “Free Will” and isn’t that what this is all about?

The original riddle was – What is the creature that walks on four legs in the morning, two legs at noon and three in the evening?” The hero Oedipus gave the answer, “Man,” causing the Sphinx’s death. Is that relevant here?

We’ll just take it for granted that the translation above is accurate. As for the episode title  – does it reflect on the character of Akane? Is that the geisha girl? 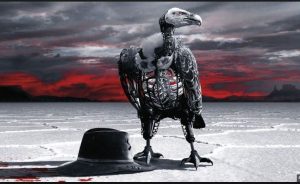 Lastly a few quotes from the cast/crew as to what to expect:

Jeffrey Wright says – “Season 2 is like Season 1 with jet fuel poured on top of it and set on fire. It’s expanded, exploded, splintered. It’s chaotic, thrilling and ‒ hopefully in a way that a jet fuel fire wouldn’t be ‒ it will be satisfying for fans.”

James Marsden says – “The stronghold the humans have had is not necessarily there anymore. The power dynamic has shifted and we’ll see what happens when the oppressed get their power and freedom.”

Executive producer J.J. Abrams says – “This season is pushing the envelope. [Original Westworld film writer and author] Michael Crichton who I met on this 20 years ago was obsessed with the [Frankenstein author] Mary Shelley question of what happens when you play God when you go too far and cross that line — what is the result? Season 2 is the answer to that question and it’s terrifying. Reading the news and watching Season 2, the gulf between fiction and what this series is and where we are is shrinking. It’s a terrifying thought.”

Finally, if you haven’t binge watched Season One yet again via HBO, HBONow/Go or DVD take in this video recap of Season One or read what we had to say.

So gather around your favored device and get set for the revolution! HBOWatch will be joining you along the way so check back for our reviews.