“A man knows a man,” where as “An outsider knows an outsider.” Holly – one outsider – states this at the end of the episode, to another outsider, Ralph. Holly, who’s socially awkward, eclectic, believes in the things that normal people wouldn’t – brought a paranormal theory to a grisly murder of a child – in which hardened detective Ralph couldn’t possibly fathom, let alone begin to come to terms with.

The season finale began with a bang – shots fired outside the entrance to the cave and it just goes downhill from there. Alec killed instantly; followed by Seale, then Andy (in an attempt to drive out of harm’s way to get signal bars on his cell phone to call 911 for back up) and then poor Howie – trying to rescue Any and getting killed by the gas tank exploding. Absolutely awful ways of being taken out and all by a former colleague turned possessed nut job Jack. Yunis was lucky – he got shot but it was a graze – at the rate that Jack was pumping out rounds at the team, Yunis could’ve lost his arm or his life.

What you must understand is that this series has been about the unexplainable; things that facts, evidence, pictures and witness testimony cannot fully sort out and shed light on. Frank had the toughest time with this – as a veteran detective, everything he’s ever known with the law and crimes is based on evidence. Ghosts, paranormal activity, possession, old wives’ tales and stories passed down from generation to generation about supernatural things just don’t cut it for Frank. That is until Holly Gibney entered the picture. Her belief in the unexplainable turned Ralph’s world upside down. Perhaps for the better. What’s that about trying to keep an open mind? Ralph is a man dealing with years of seeing brutal crimes, dealing with the death of his son and not always being able to grieve properly or seek help. The fact that Ralph slowly came around to accept that there are entities out there in the world that are malevolent and one of them could be responsible for the grisly child murders was a huge step in the right direction.

The scenes in the cave were meant to be unsettling and it didn’t disappoint. From being able to see El Cuco’s handprints glowing on the rocks, the further down Frank and Holly went, the more claustrophobic I became. I have always hated the idea of caves and being trapped in small dark areas like that. Imagine what Claude and Seale’s relatives felt during the botched search and rescue, so many years ago, having the caverns collapse over them, sealing them in forever.

History repeats itself when during a tense confrontation between El Cuco, Holly and Frank, Claude, in a desperate need for revenge, arrives unexpectedly and shoots the creature. I mean, how absolutely freaked out would you be – seeing an identical replica of yourself standing a few feet away from you – and knowing that you are not an identical twin?!  It stands to reason that anyone who was scared for their life, knowing that something was coming for them, that eerie feeling of the hairs rising on the back of your neck – would have a moment of panic, rage and sheer terror – and pull the trigger, in an attempt to end this nightmarish ordeal once and for all. 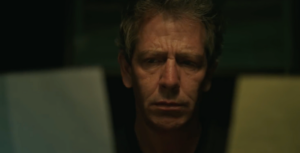 After the cave roof collapses, Holly, Ralph, and Claude (the real one) are leaving the cave, believing that El Cuco is gone for good. In this chilling scene – Ralph stands rooted to the spot – seeing the ghosts of his dead son and Ollie Peterson and takes it as an ominous warning. Ralph confronts El Cuco one last time – trying to reason why he must eliminate the creature – but his police training gets the better of him. How could the police believe that some weird creature, that’s been in boogeyman tales in certain cultures, be the sick twisted individual responsible for the murders of all the victims in the series? Ralph kills El Cuco and leaves the cave for good. Yunis, Claude, Holly, and Ralph must keep their wits about them as they come up with an alibi in order to convince local police authorities of what transpired. In a way, I agree with Ralph being vague because people would think the four of them were either crazy, suffering from some sort of mental illness or outright liars. Being able to say Jack was responsible for the crimes is a tidy way of locking down this story for good. Jack’s dead, nobody will ever uncover the story of El Cuco truly being responsible and Glory can finally be able to breathe again, knowing that her late husband was cleared of all charges. Before Holly leaves, Ralph says something about a possible future pairing up, should the occasion arise. Hmm.

And one outsider can recognize another – Holly and Ralph each being an outsider in their own way. Nice touch.

The creepiest scene was saved best for last. Holly is alone in her apartment and one thing that struck me as very odd was her listening to music. I vaguely recall that she wasn’t one to listen to music – and even more scary is the song playing was the one that Ralph told her about – and she’s in her bathroom when an eerie face stares back at her – Jack. And frantically checking the back of her neck! I almost fell off my seat, completely freaked out. What did this symbolize? What did Holly mean back in the cave, “Who’s Terry?”

And when she’s on her bed, reading off her laptop, did anyone notice that scratch………!!!!!

Before you go, check out HBO’s behind-the-scenes look at the final episodes of The Outsider: