Much anticipated, the Stephen King adaptation has finally aired and I already know I’m going to have so many questions. King is known for spinning quite some tales, so it’s easy to assume I’ll not only enjoy it but also likely be confused. While King’s presence brings immense hype, you can’t deny the star power of the cast. For now, let’s discuss the first two episodes of The Outsider. 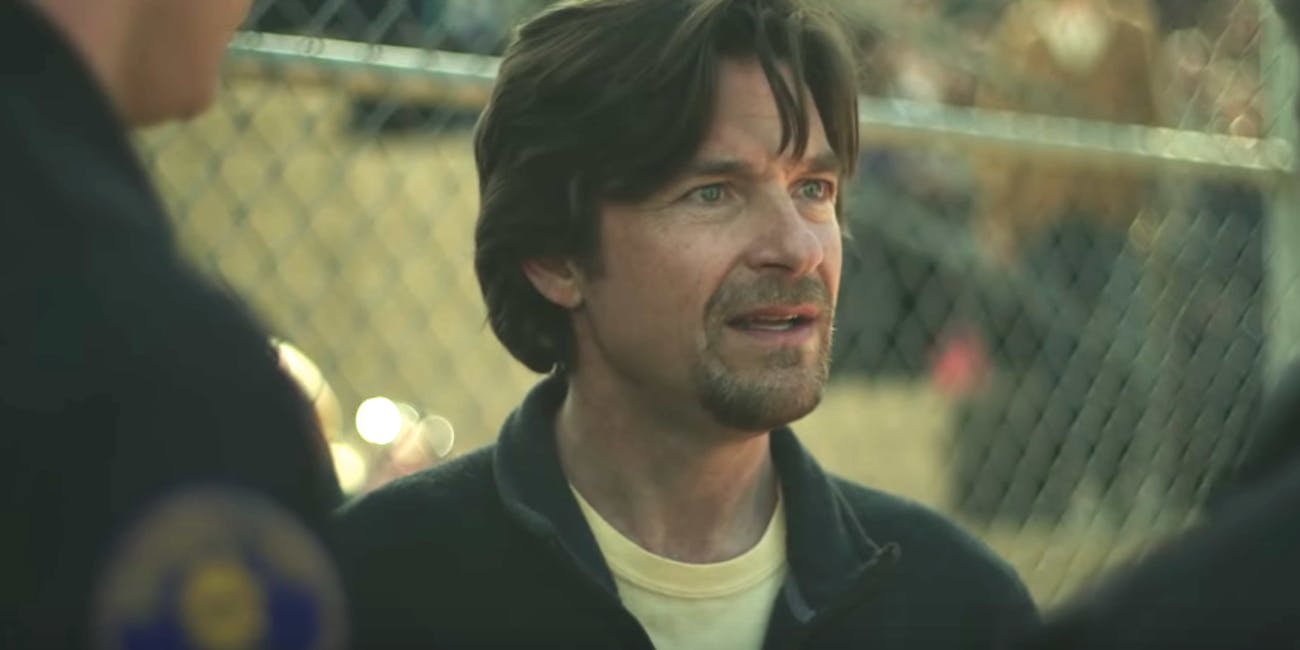 Some shows suffer from stuffy pilot episodes, making it hard for people to get into them.  This show does not have this issue and in fact, in quite the opposite manner, it escalates things rather quickly with a gruesome murder of a child.  So, talk about taking the intensity all the way up to ten right off the bat.  And of course, to maintain the intensity, a line is drawn in the sand.

On one side, Terry Maitland (Jason Bateman) is guilty.  He’s the one responsible for the bite marks on the body and for mutilating the poor boy.  He’s responsible for the van with blood dripping down the side.  After arresting him quite publicly, his image would be destroyed no matter the outcome.  Detective Anderson, portrayed wonderfully by Ben Mendelsohn, is leading the charge against Terry.  Hard to work on such a gruesome case anyway, but even harder to arrest a friend.  Small town life has its downsides.

On the other side: Terry is not guilty.  Terry insists he was at a conference during that time.  Video footage from the hotel shows him standing during a talk and asking some questions.  As well as Terry stating he ate in the crowded bar and came home the next day.  Terry’s wife Glory (Julianne Nicholson) is over in this camp, taking care of the couple’s two daughters.  Clearly having dad away from home and the stress of the whole situation is taking a toll.  For us, the evidence bounces back and forth, enticing the viewer’s opinion towards one way or the other.  You hear one side and become convinced he must have done it.  DNA on the body as well as human bite marks, several eye-witnesses place him in suspicious circumstances, and fingerprints present on the body and van add up to damning evidence.  But video footage is powerful and there’s no doubt.  It’s clear footage of Terry.

So which side is the right side?

Remember what I said earlier about keeping the intensity high?  Well, hold onto your hats.  These notches just keep climbing.  The little boy who was murdered, Frankie Peterson (Duncan E. Clark), left behind his two parents, Joy (Claire Bronson) and Fred (Frank Deal), and a brother, Ollie (Joshua Whichard).  Cleaning up after Frankie’s wake, Joy goes into a frenzy destroying things.  She eventually stops, clutching her chest from a heart attack.  Angry from the injustice and now twice the loss his family has suffered, Ollie acts rashly and pounces when Terry arrives for court.  In the end, several are wounded and Ollie and Terry are deceased.  Now the sole remaining family member, Fred is distraught and takes matters into his own hands.  Because of one tragedy, a whole family is wiped out.  Or nearly.  And who is to blame?  Did Terry do it?  Is there some other explanation?  No person can be in two places at once, so what’s the answer?  Much like the titular town, perhaps there will never be answers.  But Detective Anderson is going to try to find some.

The talent in the show is brimming.  I was hoping to see more of Bateman versus Mendelsohn in an interrogation type setting.  Seeing a cat and mouse psychological game between them would have been some good acting.  From here on, I’m sure we’ll see even more amazingness from Mendelsohn and probably flashback work for Bateman.  Mare Winningham portrays Mendelsohn’s wife and I’m looking forward to seeing more of their dynamic.  The soundtrack sets an eerie tone and works well.  Knowing nothing about the source material going in, I’m looking forward to seeing what comes next and if we’ll ever get answers.

Before you go, check out some behind-the-scenes footage and a glimpse of what is to come: