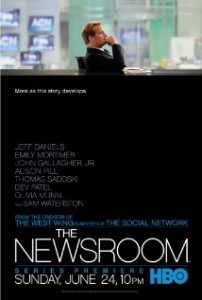 A favorite with viewers, news anchor Will McAvoy has found a safe niche with bankable ratings on his 8:00 p.m. flagship cable show, “News Night.” Numbed by success, McAvoy has become stoic, complacent, cynical – content not to rock the boat as he delivers the nightly news straight down the middle of the road – dialing it in as he avoids ruffling feathers with anything resembling politics. What fire he still has, he reserves for the cutting sarcasm and general unpleasantness that earn him no fans with his news team.

In a literal blink of an eye – or perhaps an optical illusion – McAvoy is catapulted from apathy to engagement when a spontaneous outburst leads him to tackle the principles of American patriotism in a public forum. Surviving the professional fallout from his unexpected tirade following an enforced vacation, McAvoy returns to work to discover that most of his staff has jumped ship for another show and is forced to work with several new team members brought onboard during his absence.

McAvoy’s boss, Charlie Skinner, the unapologetically old-school president of ACN’s news division, laments the changing face of the news. Setting the stage for Will’s return to the standard set by news legends such as Edward R. Murrow and Walter Cronkite, Charlie covertly orchestrates the hiring of Will’s new executive producer, the one person who can restore Will’s passion and bring the best out of him – whether Will wants it or not.

Will’s new executive producer is MacKenzie McHale, back from 26 months embedded in Iraq and Afghanistan. MacKenzie was once romantically involved with Will and knows the idealism he has buried beneath a veneer of apathy and cynicism. With their shared past, she knows exactly how good he can be. Even more unsettling for him, she challenges Will to abandon the successful, middle-of-the-road approach that has made him so popular with bothsides of the aisle, and realize his full potential by delivering the news with integrity.

Also imposed upon Will are Jim Harper, Margaret Jordan, Don Keefer, Neal Sampat and Sloan Sabbith, the newsroom staff. Although this group finds itself off to a tumultuous start when breaking news comes over the wire, they immediately come together for one elusive goal: to do TV news well. Jim Harper is MacKenzie’s loyal senior show producer. Though only 27 years old, Jim is more like the old-school reporter Charlie than he is like his contemporaries. He finds himself instantly smitten with Margaret Jordan, a young intern-turned-associated producer, who is already in a relationship with Don Keefer, Will’s former executive producer. Neal Sampat, a young, resourceful self-made newsman writes Will’s blog and scours the Internet for stories, often finding leads his colleagues have missed. Sloan Sabbith is ACN’s financial news analyst.

Created by Aaron Sorkin (Oscar® winner for writing “The Social Network,” executive producer and writer of the multiple Emmy® winner “The West Wing”), the new HBO drama series THE NEWSROOM follows the news team on their quixotic mission to reclaim the legacy of Murrow and Cronkite in the face of a fickle audience,corporate mandates and tangled personal relationships. Kicking off its ten-episode season SUNDAY, JUNE 24 (10:00-11:15 p.m. ET/PT), the series is executive produced by Sorkin, Scott Rudin (the Oscar® winner “No Country for Old Men “) and Alan Poul (HBO’s multiple Emmy® winner “Six Feet Under”).

Jeff Daniels (Golden Globe nominee for “The Squid and the Whale,” “Something Wild” and “The Purple Rose of Cairo”) stars as Will McAvoy and Emily Mortimer (“Hugo,” “Shutter Island”) stars as MacKenzie McHale.

Also starring are: Sam Waterston (Oscar® nominee for “The Killing Fields”) as Charlie Skinner; John Gallagher, Jr. (Tony winner for “Spring Awakening”) as Jim Harper; Alison Pill (HBO’s “In Treatment”) as Margaret Jordan; Thomas Sadoski (Tony nominee for “Reasons to Be Pretty”) as Don Keefer; Dev Patel (“Slumdog Millionaire”) as Neal Sampat; and Olivia Munn (“I Don’t Know How She Does It”) as Sloan Sabbith.

The series is set at the fictional cable network ACN, but the news stories being covered in the broadcast are actual past news events. THE NEWSROOM offers viewers an opportunity to return to and relive the news that made headlines as they watch it unfold for the show’s characters, who race to put together the broadcast.

Aaron Sorkin has made a career of pulling back the curtain and showing the inner workings of his various subjects. From “The West Wing” of the White House to the courtrooms of “A Few Good Men,” from the control rooms of “Sports Night” to the locker rooms of “Moneyball,” from the inner circle of “The Social Network” to the cable network of THE NEWSROOM, he invites audiences to take a sneak peek at the assorted machinations of American life shifting into gear. Finding the pulse of the operation, Sorkin depicts the human drama of the individuals behind the scenes and brings the often messy inner workings to the screen with humor and insight.

Surviving the fallout from a meltdown, ACN “News Night” anchor Will McAvoy returns to his job and finds his executive producer and most of his staff are leaving his show. Will also learns he’s been assigned a new EP: MacKenzie McHale, a former girlfriend. Will and his overhauled staff face an immediate challenge when breaking news comes over the wire.

Mac asserts control over the new incarnation of “News Night” and enlists Sloan Sabbith, a beautiful and brainy on-air economist, to do a nightly segment. Jim takes the fall for a Maggie miscue; Charlie forbids Reese from continuing his furtive meetings with Will; a long-festering breakup secret gets out.

In an on-air editorial, Will apologizes for past newscasts and promises a new era of integrity for “News Night.” Will’s new approach rankles Leona Lansing, CEO of ACN’s parent company, Atlantis World Media, who warns Charlie that Will’s stance will not be tolerated. Jim soothes Maggie during a panic attack; Doncharges Elliot to get in the game; Will parades a string of arm-candy dates in front of Mac.

Will’s “mission to civilize” takes a hit when he finds himself in the tabloid spotlight. Wade approaches Will with info on the government’s flagging ability to fight financial crime; Don gets Maggie to fix Jim up with her roommate, Lisa; Sloan strikes out as a matchmaker; and Neal’s “Bigfoot is real” pitch falls on deaf ears. Against Reese’s wishes, Will refuses to follow the media rumor mill and make a call on a breaking story.

HBO Watch:  I will be attending an early screening of the pilot episode of The Newsroom tonight!  Full review will be up tomorrow.  Watch the series premiere of The Newsroom on HBO at 10PM this Sunday! Set your DVRs to RECORD SERIES.