We interrupt your regularly scheduled email reading with breaking news… 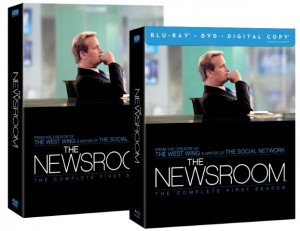 The Newsroom as it’s packed with bonus features including deleted scenes, is coming to living rooms this Summer! The Golden Globe nominated drama series from HBO debuts on Blu-ray with HBO Select, DVD and Digital Download on June 11, 2013. From the brilliant mind of Aaron Sorkin, the series focuses on an ambitious group of broadcast journalists who set out on a patriotic mission to bring integrity back to the news in the face of corporate and commercial obstacles. The dynamic series features an amazing ensemble cast headlined by Jeff Daniels, Emily Mortimer, Sam Waterston and Jane Fonda. Don’t change the channel on The Newsroom: The Complete First Seasonaudio commentaries and behind-the-scenes features.

Final product is not yet available for this release. We will email a reminder six weeks before street date, so feel free to request a review copy at that time. Please be sure to include your media outlet and mailing address with all product requests. In the meantime, if you have any questions or need box/scene art, please contact hbo_screeners@bhimpact.com with your requests.

“A must-see…exhilarating” – The Hollywood Reporter

The Newsroom®: The Complete First Season

The Social Network, executive producer and writer of the multiple Emmy® winner The West Wing), the new HBO® drama The Newsroom follows the ACN news team on their quixotic mission to reclaim the legacy of Murrow and Cronkite in the face of a fickle audience, corporate mandates and tangled personal relationships. The first season of the “noble and earnest” (Entertainment Weekly) series, which was nominated for two Golden Globe awards – Best Television Series Drama and Best Performance by an Actor in a TV Series (Jeff Daniels) – debuts on Blu-ray with HBO Select* ($79.98), DVD ($59.99) and Digital Download on June 11, 2013. Both sets include the full 10-episode season, along with extensive bonus materials including exclusive interviews and never-before-seen content.

A favorite with viewers, news anchor Will McAvoy has found a safe niche with bankable ratings on his 8:00 p.m. flagship cable show, “News Night.” Numbed by success, McAvoy has become stoic, complacent and cynical, content not to rock the boat as he delivers the nightly news straight down the middle of the road. In a literal blink of an eye, McAvoy is catapulted from apathy to engagement when a spontaneous outburst leads him to tackle the principles of American patriotism in a public forum prompting his staff to jump ship. Setting the stage for Will’s return, his boss Charlie covertly orchestrates the hiring of his ex-girlfriend, MacKenzie McHale, as his new executive producer. With their shared past, she knows exactly how good he can be. Even more unsettling for him, she challenges Will to abandon the successful, middle-of-the-road approach that has made him so popular with both sides of the aisle, and realize his full potential by delivering the news with integrity.

• “Mission Control” – a behind-the-scenes look at the state-of-the-art sets with cast and crew.

• Inside the Episodes – get the inside perspective on each of the episodes with revealing interviews from Aaron Sorkin.

The all-star cast of The Newsroom is headlined by Jeff Daniels (Golden Globe nominee for The Squid and the Whale) as Will McAvoy and Emily Mortimer (Hugo) as MacKenzie McHale. Also starring are: Sam Waterston (Academy Award® nominee for The Killing Fields) as Charlie Skinner; John Gallagher, Jr. (Tony winner for Spring Awakening) as Jim Harper; Alison Pill (HBO’s In Treatment) as Margaret Jordan; Thomas Sadoski (Tony nominee for Reasons to Be Pretty) as Don Keefer; Dev Patel (Slumdog Millionaire) as Neal Sampat; Olivia Munn (I Don’t Know How She Does It) as Sloan Sabbith; and two-time Academy Award® winner Jane Fonda (Klute, Coming Home) as ACN’s corporate owner.