Mutant-like powers set in Victorian England where mostly women are afflicted with the ability to kick-a$$? I mean, it almost sounds like it was written explicitly for me!! I did just pop over to discuss The New Mutants, but now I want to drop back a few years, 1890s to be more precise, and discuss the newest show to reach HBOMax.  We first meet our cast of characters as they are reacting to an event.  In fact, the impetus event for the show which happens to create our lovely mutants.  Think of it as an alien pollen sprinkling.  We see a variety of different people, out and about, living their glorious London lives.  Well, not always so glorious.  One of them is currently trying to off herself, but we’ll come back around to that in a mo’. 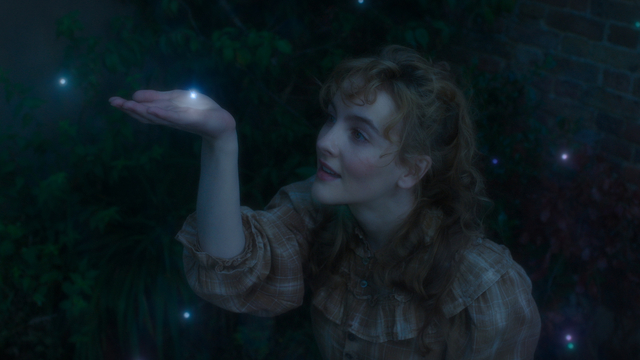 Fast forward three years, the “Touched” as they are called are congregating together at a sanctuary/orphanage in London that’s sponsored by a well-to-do woman of society.  I’m very intrigued by the use of the word “touched” and looked into the etymology.  The phrase “touched in the head” has gone out of fashion but the idea of someone being not right in the head and “touched” has been around since the 14th Century.  So I found that word choice a fascinating one.  Each “Touched” has their own “turn” or ability.  Primarily, women are the ones affected and in fact, men who are touched have stayed so far underground, the elite society males think only women have been touched.  Not surprising when men and society are oft to target anyone seemingly outside the norm.  Remember the whole witch burning thing?  Of course, people are trying to fly under the radar with these powers.  But while you’ve got the Touched trying to help find and save others, you’ve also got someone trying to get rid of them.

Amalia True (Laura Donnelly), a widow who runs the orphanage under the wealthy benefactor, Livinia Bidlow (Olivia Williams) works with her assistant, Penance Adair (Ann Skelly) to find touched and bring them to safety.  Remember the woman who was trying to off herself?  Well, she survived and now she can see glimpses into the future.  Talk about a trade up–you wanted to die but instead got magic powers.  Penance can see electricity and has a talent for inventing things.  “This is weird for us too.”  Well, it doesn’t help their mission to save the Touched that there’s one out there on a murderous spree.  Between not wanting people to find out their powers and trying to save whoever they can find, they are doing their best but it isn’t easy.  Amalia stays in contact with the Beggar King, a criminal running his own clan and selling information on the touched to whoever wants it.  “This isn’t my face.”  Oof, want to see Nick Frost casually sh*t his pants?  That line sent chills through me.  Because he thinks he’s big and bad because he’s a well-known criminal, but the reality is he has no clue what Amalia is capable of and that’s terrifying for everyone involved.

The premiere had just enough story and substance to get us hooked.  It introduces us to a host of new characters with amazing powers that I’m sure will find a way to be more incorporated and useful throughout the story.  We got a taste of society and the conflict over accepting someone who is different.  Whew, that story never seems to go out of style and in fact, we’re still struggling with that as a society.  But especially as an allegory to how LGBTQA people have struggled to find acceptance in society, so too do we see men and women hiding themselves away for safety and because of fear.

The show had a rough ride with the pandemic, seeing production cut their 10 episode series into two chunks.  Following production issues as well as other stories circulating, creator Joss Whedon exited the series citing the pandemic and “unprecedented challenges.” Though nothing has been commented about inappropriate behavior on the set of the Nevers, getting distance from Whedon following the several comments made by actors and crew he’s worked with on other shows is probably a good thing.  Whedon is known for creating great story worlds, so it will be interesting to see how the show continues without him. But so far, I’m pretty hooked.  I like mutants.  I like England.  If you enjoyed bingeing Bridgerton, this show is slightly less steamy so far but certainly hits that period piece mood and I cannot wait to see what’s in store.

Did you watch the premiere episode of The Nevers? Let us know what you think will happen next in the comments below.