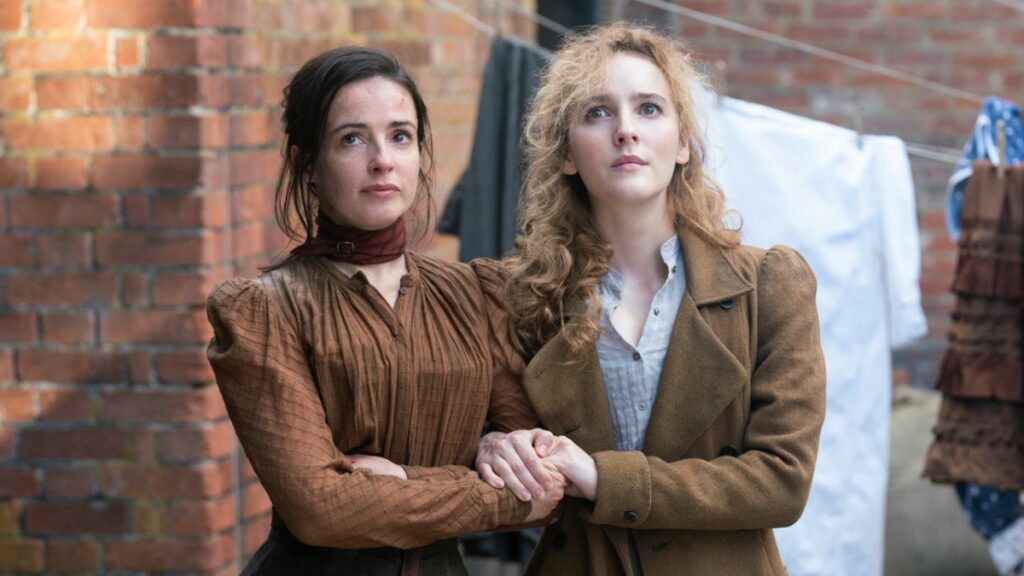 The first season of The Nevers was supposed to be ten episodes long but the global pandemic had other plans. “True” is the sixth and final episode of this installment of the series. In some ways, its narrative resonates with what people experienced last year when COVID-19 thrust us into an uncertain, confusing, and dangerous world. “True” unceremoniously uproots audiences from the familiar Victorian setting that it has established thus far. To give us a better understanding of just who Amalia ( a.ka. Zephyr Alexis Navine, a.k.a. Molly ) really is and what she wants, “True” transports us to a war-torn future. As it shifts genres from fantasy to science fiction, the episode introduces us to the woman who will later become Amalia. She is a disgruntled soldier who is skeptical about the benevolent Galanthi’s ability to save humanity from itself. After a bit of confusion last week, The Nevers has finally cleared up just what the Galanthi are: friendly aliens who are responsible for creating the Touched. “Aliens from the future gave us magical powers” explains Doctor Horatio Cousens. In an interview with Deadline, lead actress Laura Donnelly expands:

[The Galanthi is] a being that is entirely — well, it’s enlightened. It’s a higher-evolved being than humanity and so it’s entirely empathic, and genuinely, certainly, as far as I’m aware at this stage –though anything can happen– genuinely only wants to save humanity from itself. It’s trying to enlighten humanity so that it will find a way to be at peace with itself and with the Earth and be able to survive.

“True” also follows the tragic life of the original Amalia, a talented baker whose misfortunes lead her to commit suicide. After Zephyr commits suicide in the future, the Galanthi arrange for her to inhabit Amalia’s body. Finding herself imprisoned in an asylum, Zephyr adopts Amalia’s identity. As she gets her bearings in Victorian England, Amalia allies herself with Horatio and Lavinia Bidlow at the expense of Sarah, who will later go on to become Maladie after being tortured by the nefarious Dr. Hague.

In the present, Amalia has a series of visions when she makes contact with the Galanthi buried beneath the city. She returns to the orphanage determined to prepare the Touched for the conflict to come. Next year we will learn what that conflict is, exactly, and how Amalia’s friends will react to her true identity as Zephyr.

While Joss Whedon oversaw the first six episodes of The Nevers, Philippa Goslett will now oversee the show. Donnelly is optimistic about this change of directors:

I’m looking forward to because I’m really interested to see Philippa’s take, especially as a woman, and a woman who I know had already had very passionate views about many of the conversations that are being had in this series to do with politics and equality and humanity and the environment and all of those things.

At the moment, the second half of the first season has not been filmed. According to Donnelly, The Nevers will begin production again this summer.

Did you watch “True”? Share your reactions in the comments section.