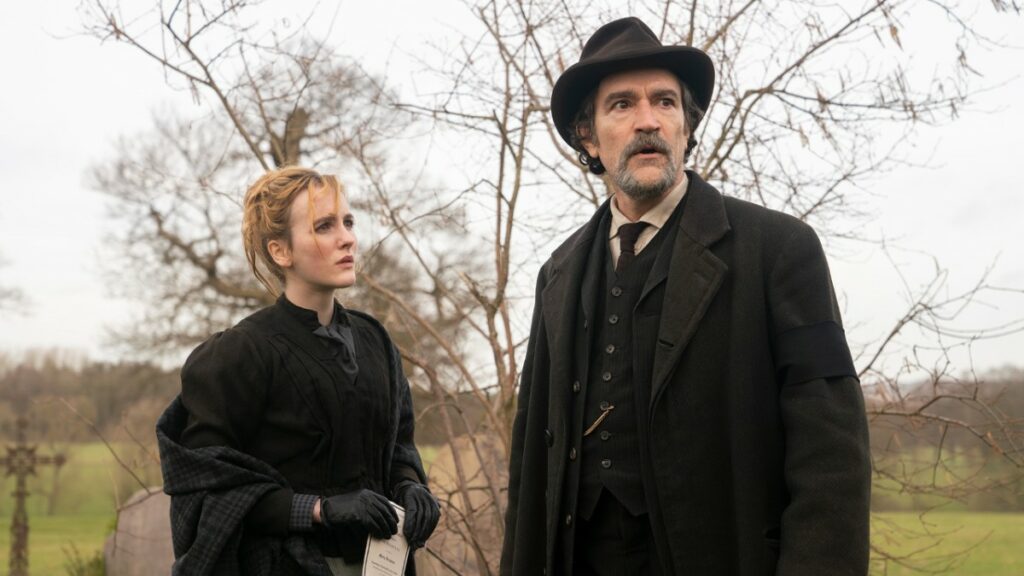 The fourth episode of The Nevers, entitled “Undertaking,” explores the aftermath of Mary Brighton’s murder. As Amalia tries to track down Mary’s killer, allegiances shift, factions fracture, and new bonds form. We also get some tantalizing hints about Amalia’s true identity and her connection to the futuristic spaceship that touched the lives of many in Episode One. More rewarding, however, is the episode’s focus on the development (and deterioration) of interpersonal relationships.  After the season’s shaky start, “Undertaking” cuts back on the breathless exposition, gratuitous violence, and tiresome subplot involving Hugo Swann’s sex club that dominated the first three episodes to foreground character development. Penance makes up with Augie and the episode provides more insight into her bond with Amalia (it seems that she and Doctor Cousens know more than we do about Amalia’s origins and abilities). Detective Mundi has a busy time renegotiating his relationship with Hugo Swann, mourning Mary, and capturing Maladie. Amalia’s trusted friend Lucy turns traitor– apparently, she’s been in cahoots with Lord Massen who is not particularly fond of “the Touched.” Massen has promised to develop a cure for Lucy’s powers. Lucy, who accidentally killed her infant son, sees the appeal in his offer. The brawl between Amalia and Lucy that follows this revelation is far more compelling than the show’s previous action scenes because there are emotional stakes. Amalia ultimately lets Lucy go with the stern warning not to return to London. I am looking forward to what seems like her inevitable return.  Of the antagonists that we’ve met thus far, Lucy’s complex (and clearly articulated) motives make her an interesting foe for Amalia.

Meanwhile, the new members of Amalia’s orphanage, including Bonfire Annie, are beginning to settle in after arriving at the behest of Mary’s song. Hopefully, The Nevers will find time to introduce us to the residents of the orphanage. For now, their numbers, personalities, and “turns” remain poorly defined for the most part. At the orphanage, Myrtle reveals that her “turn” has enabled her to understand the mysterious lyrics of Mary’s song. With the help of Primrose, Harriet, and a variety of translators, Myrtle conveys what she’s heard. The song’s message is intended for Amalia, who drops some interesting hints about “when” and where she’s from throughout the episode. Unfortunately, the rushed pace of this season makes it difficult to feel particularly invested in the mysteries or world of The Nevers. There are too many characters and questions and subplots to keep track of– much less care about. And new characters and mysteries just keep coming! For a series that is beginning to betray an interest in muddling linear notions of time, The Nevers would benefit from learning how to pace itself. After just four episodes, The Nevers has produced an extremely chaotic narrative. Time travel is the last thing we need.

How did you like “Undertaking”? Let us know in the comments below.