I am not sure when the name change happened and why we missed it but, MASTERS OF THE AIR , the WWII companion piece to BAND OF BROTHERS and THE PACIFIC,  is now officially titled THE MIGHTY EIGHTH. Let’s take a moment to realize what we can gain about the production due to that title change.

The project, from Playtone Productions, was quickly given the name “Masters of the Air” because it was announced early that the source material for the project was a non-fiction account of the same name by Donald Miller. Though it is a commanding title it is a rather vague one. Now with the name changed to THE MIGHTY EIGHTH there is no mistake who is getting honored here with a film. If you remember the two prior films in this WWII epic they took different approaches in telling their story. BAND OF BROTHERS was not about the U. S. Army in general, but of a specific unit and of the intense service that one unit gave for the cause. Where THE PACIFIC was more of a collection of events focusing on a handful 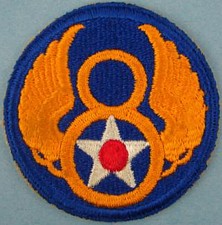 of servicemen illustrating what the war in the Pacific Theater was like. This third upcoming miniseries, now made more evident by its title change, will take the same angle as BAND OF BROTHERS; it will focus on one squadron and one set of characters through its chronicled heroic missions. It will be a great companion to the other two miniseries.

Lately there has been a little bit of buzz that this production is finally getting underway. Just think for a moment, however, how monumental a project this is. The production team needs to lock down locations, muster together historically accurate costumes and equipment, build, borrow or rent war weapons and vehicles and coordinate a cast and crew of hundreds. A number of sites including this one state that the project will cost $500 million dollars which is quite a lofty price for a TV project.

Now here is something interesting. Though it has been sort of vague exactly what this video clip is the main consensus is that it is a trailer that Playtone Productions used as a concept idea to pitch to HBO. Okay, but after Playtone’s proven track record with the other two miniseries did it really have to try to sell THE MIGHTY EIGHTH that hard?

Now, understand before you see this video. This is not a scene in the movie or actors necessarily involved in the TV event. This is a network pitch, a special effect test or even totally unrelated footage to the upcoming HBO miniseries. In any case it does set the tone for the type of scene we can expect in this depiction of the masters of the air and their confrontation with the Luftwaffe.

We await your comment. Surely this has got to excite someone out there? We will be on duty and keep you posted.