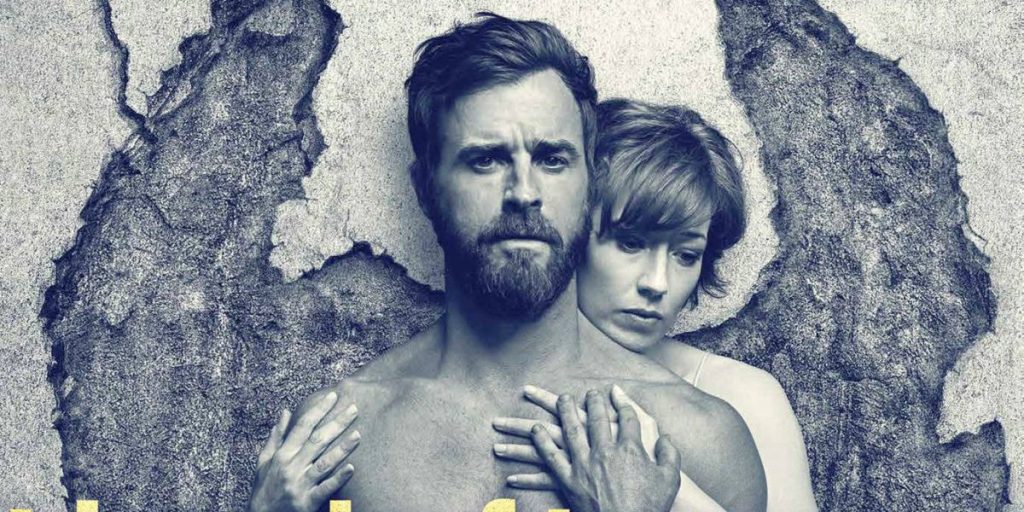 Before dissecting the incredibly dense and heavily metaphorical season opener of The Leftovers, it only seems right to start with my brief yet longing love letter to the series. There is truly nothing on television even close in similarity to The Leftovers. This series has done more in 21 episodes than arguably any other series currently on television. That is, of course, largely due to the show’s incredible source material for Season One and a massive jump in intellectual creativity and intensity in Season Two.  This season presents its third and final chapter of the tale in a highly allegorical manner, in classic fashion for the show, opening with a flashback period piece akin to Season Two’s season premiere. As always, The Leftovers hints at answers and major plot points to come but always adds on to the questions it has left unanswered. Of course, with a show like The Leftovers, it’s hard to say we deserve any answers at all. After all, as Damon Lindelof has stated numerous times, we will never, ever, EVER, know what caused The Sudden Departure. This is entirely contrary to the relevance or meaning of the series. Here is a recap of seasons one and two for those who need a reminder or like scouting for Easter eggs and jottings down theories in a frenzy (like myself).

As stated,“The Book of Kevin” opens with a haunting period piece. Season Two’s period piece depicted the horror of chance, death, birth, and renewal. In retrospect, this is a massive foreshadowing of the events that took place in Season Two. This season’s prologue is a heavily symbolic foretelling of what is to come in the final season. This segment tak 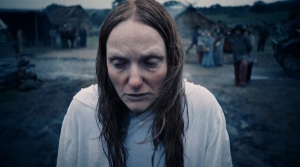 es place in 1844 with members of a “prophetic” Christian sect named the Millerites. We follow a woman gripping to her faith, believing that she will ascend to Heaven on the date set by the faulty calculations of their preacher. He provides incorrect dates repeatedly, and though each is wrong, this is not of importance to the woman. We see hope in her eyes every time a new date is set, and she stands on her rooftop on every set date regardless of its high probability of inaccuracy because what is of meaning to her is the promise of a better future. Of course, the unending falsities drive much of the congregation away, including the woman’s husband and son. A look of grief and disenchantment comes over her face after another incorrect ascension date, as if knowing a better tomorrow will never come. She held onto hope and eventually abandoned it, as many in the The Leftovers have. Aside from this segment’s obvious connection to The Rapture, it mimics the expectancy of an apocalyptic ending, which is likely the central theme of Season Three. There is a beautiful transition, draped in white clothing, as we are transported to a time shortly after Season Two involving Evie Murphy and Megan Abbott. Remember that Meg brought Evie into the GR fold? Well, their conversation soon turns to chaos, ending shockingly with what appears to be a missile headed straight toward Evie and the Guilty Remnant’s encampment, reflected on her glasses as her eyes well with tears. This was a planned attack, and considering the dark nature of The Leftovers, my prediction is Kevin made the call as sheriff at the time. We are then taken to the central timeline of the story, which takes place three years after the attack. 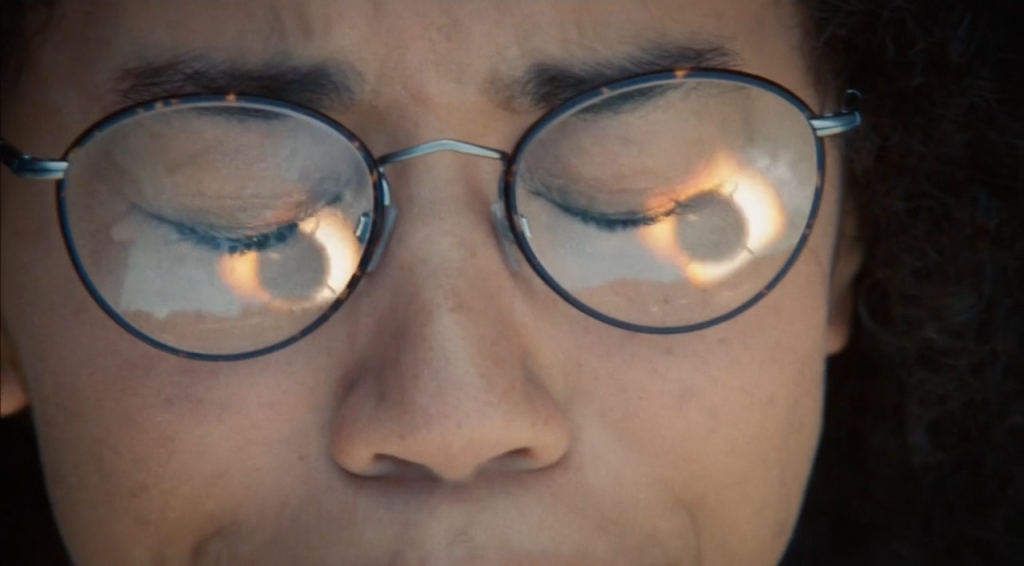 In the show’s main timeline, we are greeted by Kevin Garvey donning a police uniform, invoking a sense of Mapleton nostalgia as he is now the sheriff of Miracle or is it Jarden? He rides a horse through a worn and dilapidated  Miracle, much like a tourist commodity. We learn individuals no longer need wristbands to enter Miracle and many vendors are taking monetary advantage of the new Miracle. In a cruel act of irony, John Murphy now gives palm readings to visitors (sound familiar?) and the entire experience is falsifie 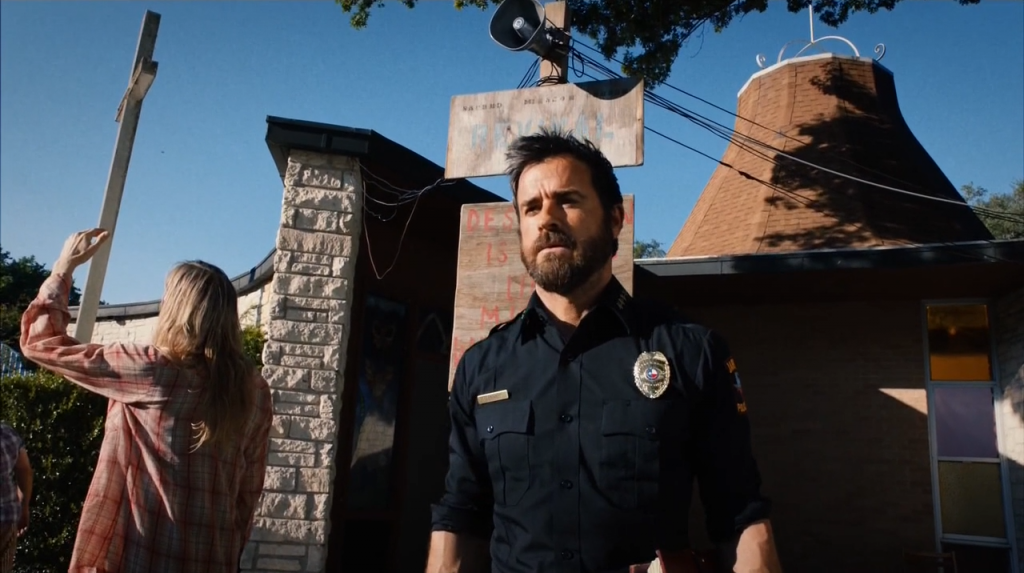 d with the help of Laurie Garvey, using wireless earbuds to communicate with John while investigating client’s Facebook profiles and personal information online. We later learn they are romantically involved, which is disconcerting with the unexplained disappearance of John’s wife Erika. Strangely, the group manages to get along, including Nora Durst (who is now actively working for the Department of Sudden Departures again), Laurie (who is now living in Miracle and dating John), and son Tommy  (who is also a cop in Miracle and seems to harbor a lot of aggression towards his father). It also appears as though John and Kevin have forgotten about their attempted murder incident. After all, now that Kevin is immortal (allegedly, and only inside Miracle according to Rev. Matt), he can do absolutely anything he wants, like jump into a possibly poisoned lake and later commit suicide. He awakens unscathed and opens a wardrobe that pays ode to his from the afterlife, continuing living in a tortured daze. There is clearly much we don’t know that is eating away at Kevin, and finding out Matt is writing a gospel about him and “resurrection” certainly doesn’t help the situation. We are as confused as he is, it seems, about his inability to die. The Book of Kevin eventually makes its debut as Kevin furiously takes the book from Matt and goes straight to a burning barrel, opting out of throwing it into the flames. Perhaps the book may provide some answers about Kevin existing as an anomaly, drawing comparisons to Jesus, but as aforementioned, The Leftovers isn’t big on answering its questions. 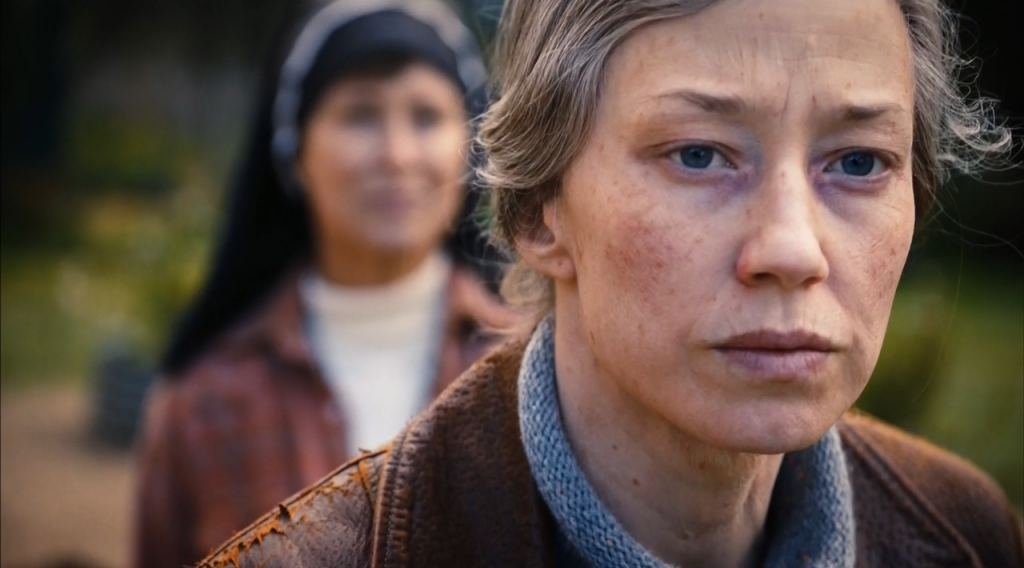 The final segment of “The Book of Kevin” was as shocking as its opening prologue, but to be fair, the entire episode is a whirlwind that demands multiple viewings. We see a woman delivering carrier pigeons, who is eventually asked, “Sarah, does the name Kevin mean anything to you?” We then see a worn and aged Nora, somberly yet firmly stating, “No.” Aside from knowing this takes place somewhere in Australia in the future and Nora is going by a different name, The Leftovers has much explaining to do. This is in addition to Erika and baby Lily’s disappearances. There is no doubt The Leftovers is hitting full speed and upping the ante in its final season.

There is, of course, an insurmountable amount of theories we can derive from The Leftovers so far. The most obvious is that The Rapture did occur on October 14th, and these have been the seven years of “trials and tribulations” as predicted in Revelations in the Bible (of primarily Christian and Catholic denominations). Still, seeing Nora in the future debunks that, unless she’s in either Heaven or Hell. (Australia doesn’t seem like an apt location for either). Another favorite of mine is Kevin as the second coming of Jesus Christ, because 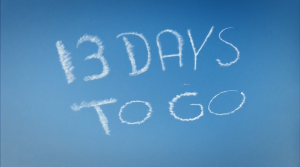 Kevin has unarguably been the antithesis of Jesus throughout all of The Leftovers. Jesus Christ embraced salvation by forsaking his family, and it seems Kevin has done the opposite, gripping his family like a life source. (He quite literally handcuffed himself to Nora nightly, remember?) Additionally, this fits nicely with the idea that Kevin’s “followers” are named after followers of Christ: Matthew and John. There is also the glaring possibility that Kevin has been dead since the finale of Season Two, and he is either in purgatory or his personal Hell. At last, there is the flood to come, akin to the biblical flood. It is only fitting Season Three is to present us with Noah for this occasion, though it is highly unlikely the Jamison’s three-year-old will be at the helm of an ark. Theories aside, the end is truly here for The Leftovers, and as Matt told us, “Nothing will happen on the 14th unless everything happens on the 14th.”

Here’s a preview of what is to come in the weeks ahead on The Leftovers and what critics say.