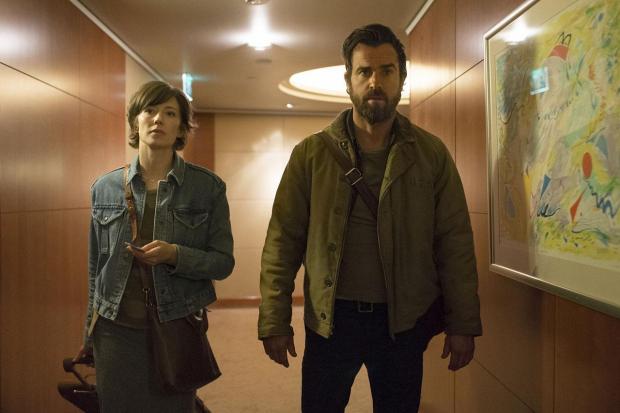 A tale of two “Kevins.” A trip to Australia leads to more confusion, heartache and bewilderment. A relationship on the skids. I don’t know about you, but watching Kevin and Nora’s relationship begin to unravel was unnerving (was it starting to unravel or did it just come undone with lightening speed?). We see the mysterious return of someone who was previously thought to be dead. Is Kevin completely losing his mind? What’s with the television in the hotel room? And the television flickering off while Kevin is staring at a woman who appears to be Evie – creepy or what?! No, we need to play that out. Here.

The further we get into this series, the more it feels like we’ve gone down the rabbit hole. Except that there’s no Alice, no Red Queen and no happy ending to make everyone feel good. Instead, we get a pretty negative vibe from the get-go – Nora smuggling in $25,000 cash, Kevin flipping out at the television, Kevin Garvey Sr.  presumed missing and the scientists who are supposedly going to provide answers about the Departure, although we know it’s a scam. If you ever thought you were having a bad day, it could be a lot worse: you could be Kevin Garvey, suffering from hallucinations, flashbacks from the past and being really angry about insinuations of being the next Jesus Christ.  Of course, it doesn’t help that Nora brought that manuscript with them to Australia. Really? Kevin hates the idea of a book being written about him. It’s just another thing that’s going to drive the wedge between these two even wider. 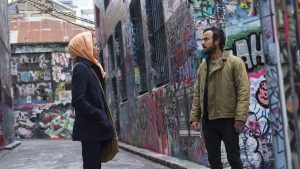 are on edge – rightly so – especially when we see how desperate Nora is to find answers ($25,000 down the tubes) and Kevin looks as though he is starting to lose his mental faculties (chasing down the young woman who looks like Evie but is not). Their relationship is strained and going to Australia didn’t make things between them any better. Past wounds are ripped open and tempers flare. Nora is still bitter about having to give up baby Lily, while Kevin is struggling on a daily basis with his mental state. You can’t help but feel sorry for Kevin – he’s been shot, poisoned and killed several times, only to come back to life. Who knows what happened while he was on the other side, albeit briefly? Once he came back to life, things just got even weirder. When Nora and Kevin first got together, they were both lonely and searching for answers. They were wounded souls that recognized a need for human connection and companionship. Years later, we look at them both and see that they have drifted apart. It’s like they no longer really care to be together, they’re just going through the motions of being a couple. Yet, they are on divergent paths. The writing’s on the wall. Except that these two either don’t care to see it or are too scared to do anything about it. I guess that’s what happens when you are so caught up in your own sorrow, anger or disillusionment. 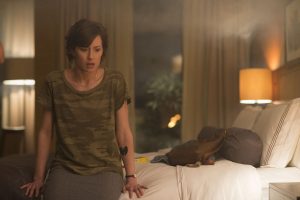 le aim is to meet the scientists and perhaps end up taking a trip to the other side herself. Problem is, you just can’t go – you have to undergo a series of tests and if they deem you fit, then all systems are clear. Remember the guy from the previous episode that lit himself on fire? Well, he wasn’t prepared to kill an innocent baby, even if it meant finding the cure for cancer. Nora, on the other hand, didn’t seem too fazed. Her purpose in venturing to Australia was maybe to go and be with her departed children. That’s really creepy but she is lost in bitterness and a deep melancholy. Kevin’s purpose to venture to Australia is to accompany Nora. However, the audience knows that Kevin’s father is out there somewhere. Kevin is made aware of this while in the hotel room, where he sees a news brief that mentions the disappearance of two men, both named Kevin. I’d be a little unsettled by the news, too. Is Kevin’s real purpose to get away from everything and everyone back in Jardin? I mean, Australia is a pretty far place to go to and the possibility of starting over again is a good one. What about the possibility that he is starting to have a mental breakdown? It’s like he can’t seem to catch a break. He feels strongly that a young woman he saw on a news show was the dead Evie – and yet after confronting her finds out that it just isn’t her.

The relationship between Kevin and Nora, at this point, is combustible. It’s the end. The final moments of the episode are something out of the Twilight Zone – there’s a fire at the hotel, Kevin leaves Nora in the hotel room, while the manuscript of the Book of Kevin is slowly burning away. She’s crying, in shock and in silence, the relationship over and done with. Kevin is reunited with his father while out in the vast expanse of the Australian wilderness and things just got a whole lot darker for these two. Perhaps a lot darker for us all because…there has to be a reason.