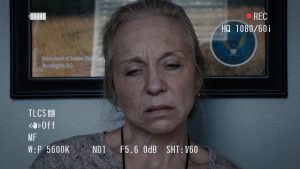 To say that this episode of The Leftovers was bizarre, as if something out of a feverish dream, is an understatement. In a very Nora-centric episode, we see her dealing with feelings of isolation, depression and finally anger, not to mention drifting in and out of some sort of parallel world. Is she going crazy? What the hell has really happened to all the people that suddenly departed? And what’s up with the return of a ’80s sitcom character, Mark Linn-Baker (remember Perfect Strangers?)?!  Oh, right, his castmates departed! Viewers will feel as though they took a plunge through the same rabbit hole that Alice did when she took her trip to Wonderland. Bizarre.

First, we see the old man from the bell tower in Jardin fall to his death. The wife says he departed. Nora’s brother the Rev. Matt has another reason for why the old man died. Not exactly rocket science but Nora has her job at the DSD to do and the episode is off and running. Job aside, Nora receives a mysterious phone call and immediately sets out to St. Louis on a business trip and viewers know that she’s in a tailspin of sorts – this call had to do with the vague perception of seeing her children again.

I think for anyone who lost someone in the Sudden Departure – the real possibility of seeing your loved ones would not only give you hope, it would drive you to distraction. Upon meeting Mark Linn-Baker in a hotel room, he gives her some pretty compelling testimony as to the rationale behind the Departure and that there are people who consented to volunteer to “go to the other side.” One of the best lines of the episode is delivered by Mark – Nora scoffs aside all his musings, brushing him off as being depressed and possibly suicidal. “I want to take some f—ing control,” asserts Mark. That resonates with Nora because let’s face it – taking back control is a primal human urge and when we feel out of control, we feel lost, isolated, angry and bewildered. Regaining a sense of control gives us some sense of certainty over our lives. Mark wanted to take back some control in his life and now we see Nora’s wheels starting to spin in the same way.

As if that weren’t bizarre enough, every single time Nora has to use some form of technology, it fails or freezes up on her. It’s enough to make a person snap a 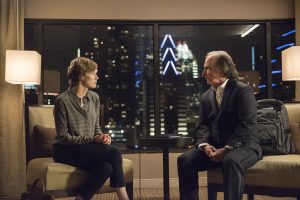 nd Nora snaps at some poor guy in a car when she can’t get her parking ticket in the pay machine accepted. Nora can’t control the faulty technology. Just like the same way Nora couldn’t control the events of the Departure when her husband and children were taken from her. Nora becomes angry and out of control, going off on a road trip just to catch a glimpse of her former adopted daughter, Lily. Well, now we know what happened to the little girl – she was at the center of a custody battle between Nora and Christine, the birth mother. Christine won full custody of Lily and, it is revealed, that Nora did not fight back and forfeited all custodial proceedings. Another wound that Nora was forced to endure. A human can only take so many kicks to the gut before it takes an awful toll, both physically and emotionally. Nora is openly distressed and spins out of that park and makes her way to a house, knocks on the door and waits for it to open. Who answers? Erika Murphy. 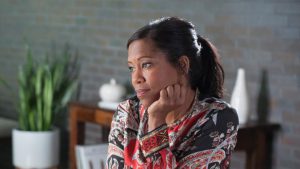 Erika makes an appearance this episode and she looks happy, calm and settled into her new life outside Jardin. Perhaps that was a good move on her part. Nora and Erika have a frank talk about the Departure, what it means to have a proper goodbye to your loved ones and the strange purpose of Nora’s cast and why she felt she had to cover up her arm. A small tattoo of her children’s name was enough to send her into an emotional downward spiral whenever someone would compliment or ask about the markings. This prompts the new tattoo of a Wu-Tang Clan symbol over her old one. I think anyone who has ever experienced some sort of traumatic event in their life just wants the power to forget about it, permanently. Saying that is one thing, doing it is another thing entirely. So Nora covered her tattoo up – that was a form of a coping mechanism (in the beginning of the episode, Nora talks about coping mechanisms while interviewing the widow of the old hermit who died). There’s even an interesting clip where you see Nora and Erika jumping on a trampoline (could be looked at as whimsical or yet another coping mechanism).

Once back in Jardin, Nora ends up being pulled over by Kevin’s son, Tommy. The conversation is terse and Nora looks upset about Christine and Lily being brought up. So, what does she end up doing? Talk about being a “cold hearted bitch” – which is exactly what she is, Nora gets a photo of the old dead hermit and has it blown up and placed at his memorial site, much to the displeasure and seething contempt of his widow. What the hell was she thinking?! Just because you’re pissed off with the fact that you relinquished custody of Lily and that your children are dead doesn’t give you the

right to act like a sociopath and bring other people pain, just so you can get off on it. I do not like Nora at all this season. Coming home late at night, Nora finds Kevin in the midst of his asphyxiation ritual. Even weirder – Kevin wants to have a baby with Nora, which prompts her to laugh hysterically. Laughter aside, Nora and Kevin will be going to Australia, as she has business to attend to. I don’t know about you, but going to Australia and having to pay a fee of $25,000 for something that isn’t a sure thing is a bit off the mark, but that’s just me. After watching this episode, I think others out there may feel the same. Just when I thought the bizarre feeling of the episode was about to come to an end, we are transported to Australia.

In a brief scene, four women (perhaps I digress but this made me think of the Four Horsemen of the Apocalypse) confront a steely police chief, who just happens to be named Kevin, accost him and tie him up. One of them recites some biblical verses and she is convinced that “this is the right Kevin.” Apparently not, as this Kevin drowns and does not come back to life. The other women become agitated for good reason when a shadowy figure from a house comes to the door to see what all the noise is about. Guess who? Kevin Garvey Senior is back! And what the heck is the significance of Australia? Guess we’ll find out in the coming episodes. No wonder why this episode was titled “Don’t Be Ridiculous” because there sure were a lot of completely screwed up things that took place. Made me shake my head a few times, that’s for sure! But, did it leave your mind rattled?

Here is a review of Episode # 3 – “Crazy Whitefella Thinking”