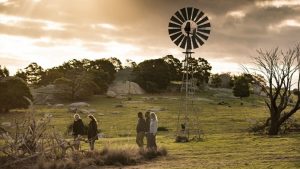 Continuing to delve deeper into the human psyche, this week’s episode of The Leftovers display pain and trauma. The Sudden Departure did many things to many people: but most notably, we get an episode dedicated to Laurie Garvey and the pain she was forced to endure when the Departure took place. We get some insight into why she is the way she is. And it’s pretty sad.

This episode sees Laurie, Matt, John, Michael, Nora, Garvey Sr. and Grace all gathering around a table to have a meal together. To the naked eye, it’s just a group of folks having a bite to eat, talking and spending time together. However, we know that this is no ordinary meal. It gave off a decidedly biblical vibe (there was a gathering once around a table, with twelve men and one very distinct teacher in the middle, coming together for a last supper, if you get my hint). I’ll have more on this last dinner later on.

Talk about truly heartbreaking. And in sitting there, pouring her heart out to Laurie (and let’s not forget, Laurie went through her own devastating loss when her unborn baby inside of her vanished), this patient wants some direction, guidance, anything to get her to move on. Laurie, being broken in her own way, can only mutter a helpless, “I don’t know.” Imagine how that session went over, like a lead balloon. The doctor is even more bewildered and broken than the patient. 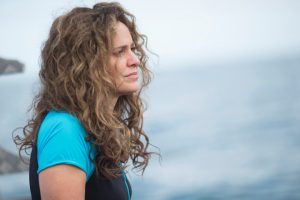 I think the Sudden Departure brought on such intense feelings, such as anxiety, despair, fear, anger and depression that many people didn’t know how to cope or could not find healthy means to deal with how it affected them. Suicide is the option that Laurie almost follows through on – swallow a bottle of pills and see where that takes you – but she panics at the last minute and makes herself throw up all the pills. We witness some pretty raw anguish within Laurie. This is the beginning of the Guilty Remnant for Laurie. This is where we see Laurie go through her transformation: white clothing, chain smoking, and do things in the extreme and pissing people off. Better to do something and be around people than to do nothing at all and be all alone, isolated with fear and depression. Was this because Laurie was afraid to be alone with her thoughts? Was this her way to cope with the Departure? A way to take back some control?

Enter Nora. She’s still on that whole ‘I have to find that Departure mechanism to see if it really exists but don’t worry I won’t use it to kill myself’ quest. Matt’s purpose is to be a good brother and stay by his sister’s side, in the event that she actually departs. Kevin Senior has a dark purpose: hiding shoes from Grace – not just a pair of adult shoes, but children’s shoes – so as long as Grace keeps believing that 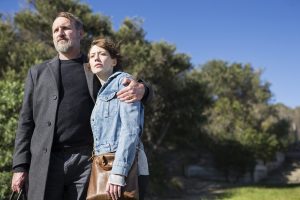 Kevin Jr can help her out by finding her children on the other side, and then she will help Kevin Sr. with finding his son. You know, scratch my back and I’ll return the favor? Hello, folks? You didn’t lose car keys! People disappeared without a trace from your life, and you’re never going to see them again!

Getting back to our dinner date with the gang: Laurie pulls a really sneaky move and has everyone drugged. Why? Guess what she’s thinking of doing….again? I guess when a person feels that they have absolutely no other choice in life but to attempt suicide, they really are completely lost and broken. Laurie spends her final moments talking to her husband, her ex-husband and Nora.  I guess that’s what some people would call “making your peace.” Even a call from her kids doesn’t stop Laurie. It’s rather dark, wanting to go scuba diving, especially when a storm is approaching. Laurie leaves it all behind and falls back into the water with such a sad finality to it, that you wish someone had been there to jump in after her. That won’t happen now.

It all boils down to the human spirit being broken: when a person has hit their lowest ebb, they cannot be saved. They have no more will to survive. They want out. The give up. The aftermath of what Laurie did will be felt in the final episodes.