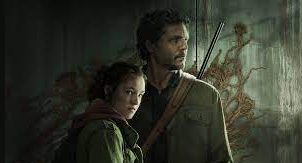 It is still hard to say for sure, but by all indications, it looks like THE LAST OF US has hit all the right marks to be a memorable show for HBO. It needs one. With all the discord surrounding Mr. Zaslav and the sad state of WBD, we count on those shows that are branded “HBO Original” to continue to live up to the quality HBO stood for throughout its fifty years. Currently, in hour-drama of epic proportions we have SUCCESSION, HOUSE OF THE DRAGON, and now THE LAST OF US.

But can this show, which just debuted SUNDAY, JANUARY 15, be considered epic? Can a show slated to be just two seasons long be considered an epic? Well, I say that yes, it can, if it stands out as memorable enough and I think this one, even only after watching its premiere, does that. Everyone states that it has been treated just right. It holds true to its source material, and how could it not with the video game’s creator Neil Druckman himself in on the adaptation? How can it 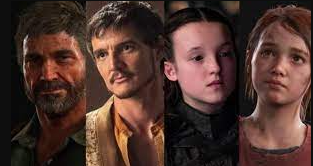 not with Craig Mazin of CHERNOBYL at his side every step of the way?

It taps into all the right energy from the videogame, which, by the way, I’ve played personally three times. How about you? But, relax, you do NOT have to have played the PlayStation title to enjoy the series. And just because you’ve played the game and know the outcome doesn’t mean you shouldn’t take in this series because it embellishes moments and characters to enrich it even further. Then there are always the Easter Eggs to note along the way. It is just working up to be a very solid bit of programming.

The numbers help to confirm that. An official press release states the following –

The series premiere of THE LAST OF US drew 4.7 million viewers across linear and HBO Max platforms on Sunday night in the U.S., based on Nielsen and first party data. This is HBO’s second largest debut, behind only “House of the Dragon,” since “Boardwalk Empire” premiered on the network in 2010, before HBO programming was broadly available on a streaming app.

“We are thrilled to see fans of the series and game alike experience this iconic story in a new way, and we extend our gratitude to them for helping to make it a success,” said Casey Bloys, Chairman and CEO, HBO & HBO Max Content. “Congratulations to Craig, Neil and the brilliant cast and crew who worked tirelessly to bring this show to life. We look forward to fans around the world enjoying the rest of the season.”

“Our focus was simply to make the best possible adaptation of this beloved story for as big an audience as we could,” said Executive Producers Craig Mazin and Neil Druckmann. “We are overjoyed to see how many fans, both old and new, have welcomed ‘The Last of Us’ into their homes and their hearts.”

With a 99% critic score on Rotten Tomatoes, THE LAST OF US has been declared “HBO’s next big hit” by Rolling Stone, with Variety noting, “one sees the near future in which the show winds up among television’s best.” IndieWire declared the new series “better than every video game adaptation that comes to mind,” with IGN hailing it as “a brilliant retelling of one of video games’ most beloved stories” and adding that it “delivers an enriching show for fans of the PlayStation hit, while also managing to stay welcomingly thrilling to newcomers.” CNN called the storytelling “absolutely fearless and unflinching, creating horrifying scenarios and moments that can be alternately touching and utterly tragic.”

New episodes of THE LAST OF US debut each Sunday at 9:00 p.m. ET/PT on HBO and will be available to stream on HBO Max, leading up to the finale on March 12. Fans can also tune in to The Last of Us Podcast, the series’ official companion podcast where host Troy Baker, who plays Joel in the video game, sits down with series creators Craig Mazin (Emmy-winning creator of HBO’s “Chernobyl”) and Neil Druckmann, the creator of the acclaimed video game, for a scene-by-scene deep dive of each episode.

Rolling Stone also has info regarding what is ahead.

The second episode clocks in at 53 minutes and deals with Joel, Ellie and Tess making their way through the remnants of Boston. 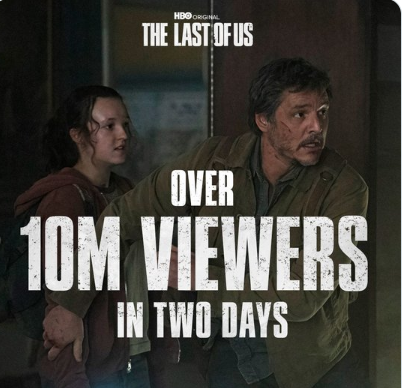 The third episode comes in at 76 minutes and deals with Bill’s Town along with exploring the backstory of Bill and Frank’s relationship. This is the episode that early reviews tout as the best of the series.

The fourth episode comes in at 46 minutes and likely kicks off the events of Pittsburgh. Episodes 5 & 6 both clock in at 59 minutes each. Episode 7 is 56 minutes, Episode 8 is 51 minutes, and the final episode is a short and tight 43 minutes – considerably shorter than the 81-minute runtime of the premiere.

That 4.7 million quickly grew to 10 million views. Do not be one of the last of us to experience THE LAST OF US. The more impactful “HBO Original” content becomes the more it will remain at the forefront where it belongs at WBD. HBOWatch will be reviewing THE LAST OF US weekly. Long live HBO!