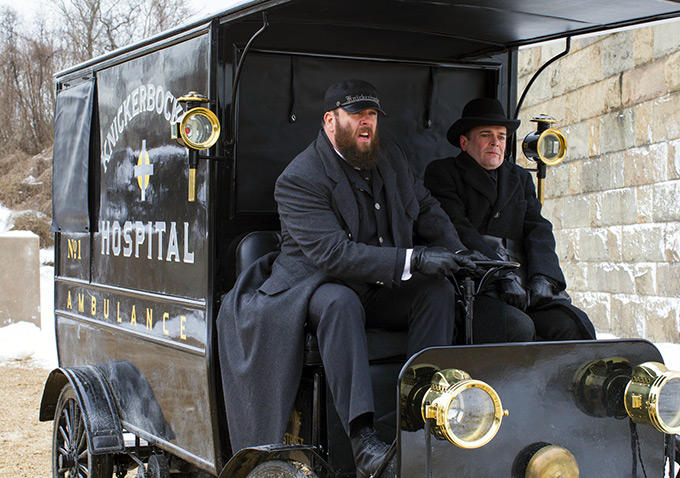 (Hey, there are spoilers; that’s just the way it is.)

Dr. John Thackeray is back! Inspector Speight is dead! Sister Harriet is barely holding up. Dr. Algernon Edward’s eye condition is getting worse. Dr. Everett Gallinger’s glacial tone is ever present. Dr. Bertie Chickering can barely conceal is disgust for Thackery and promptly hands in his resignation. Nurse Elkins’ father comes into the fold. Cleary encounters issues with his investments. Cornelia is stifled by her high society demands and Barrow continues his skimming off the top to make a profit, albeit on the sly. In other words not one person or situation around the Knickerbocker is rosy and sweet.

Let’s start with the failed relationships at the Knick. And there are so many to choose from. Bertie and John are on 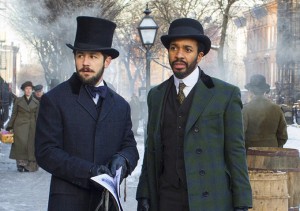 the outs. The apprentice and master relationship is no more: emotions run high and a woman has come between them. John shuts down Bertie on the notion of a woman being pure and Bertie realizes that John was arrogant and edgy before; hearing about his relationship with Lucy was the last straw. Lucy, on the other hand, has held John close to heart, only to be dropped like a hot potato. John feels it’s best to make a clean break – and this can relate to so many characters in the Knick. We all know the saying about a woman scorned.

Everett is chomping at the bit to get into the Knick and trump Algernon. Tensions are running high on all angles – who can you trust? Who will backstab who? Bertie and Algernon want to run a hospital with high ethical and moral standards. John and Everett want to return and have things back to the way they used to, except for one hitch: John will be doing research on drug addiction, which is a huge risk for the times. The Board of Directors is not entirely convinced in the idea of John and his research. However, when he says the golden words: “We can charge handsomely” – well, money talks.

Captain Roberts and Daddy Showalter Senior continue to assert power and control over their sons, who are just aching to get from under the grasp of their respective fathers. Investing in the latest cutting edge technologies and manufacturing industries would bring prestige and wealth beyond measure to the Roberts and Showalters families. Fathers and sons are at odds and it will be interesting to see how this unwinds down the road.

Cornelia assumes her duties in the capacity of organizing a fundraiser for the new Knickerbocker hospital. Yes, it’s all very proper until she finds out about Inspector Speight’s death. After digging at the top levels, she finds that bribery and corruption are hand in hand and gets no results. Turning to Algernon to ask for help about conducting experiments on a dead body to see if alcohol was the cause of death was admirable for her part. Bringing Cleary on board to dig up the body was also savvy – Cleary is a tough man with the experience of digging graves. But to no avail – the good Inspector’s body is nowhere to be found, least of all his grave. Who has the body? What kind of people did Speight cross? And why does Cornelia 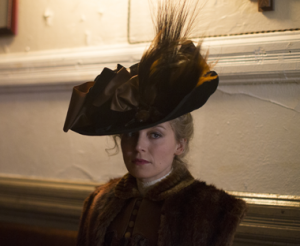 insist upon getting involved in things that are dangerous?

Clearly is struggling on all counts – his electric car is acting up; his ambulance mechanic is a fool; his wrestling endeavors are not turning a profit and he can’t afford to pay for the Harvard lawyer he hired for Harriet. The man is desperate. Desperate times, desperate measures – he outright pleads with Cornelia, while digging Speight’s grave – to pay for Harriet’s legal representation.

Barrow is still skimming off the top to make a secret profit – a leopard never changes their spots. After meeting Wu and his ‘ladies’ in one of the back rooms of the Knick, Nurse Elkins and Dr. Mays (the family physician) are called upon to help the poor unfortunates, as they have the talent for discretion. Very odd to see how enthusiastic Dr. Mays was. The look on Nurse Elkins face was disturbing – she’s trying to go by the books, however, Dr. Mays appears to have a more, shall we say, ‘peculiar’ method of examining his female patients. And the penetrating look that Wu gave Lucy – that made my skin crawl.

What’s with Lucy’s father coming for a visit? Anyone else a bit creeped out with the preaching and eerie music playing in the background? He seems like a nice enough man, but he has no clue what his daughter has been doing. Maybe its better he doesn’t ever find out.

But it’s the hallucinations of a young surgery patient that have Thackeray shaken and stirred. So much so that in attempting to perform a rather risky surgery on Algernon, he has to stop under duress. What the hell is going on with Thack? Is it post-traumatic stress disorder? Perhaps he’s not ready to resume risky surgeries just yet. Is he rushing into work too soon? After his brief sexual tryst with the barmaid, will this cloud his judgement even more? Will Thack truly get over his drug addiction and thrive? Or will he end up bringing ruin and despair to the Knick?

See, we told you no one was smelling like a rose. Is there a rosy future ahead for our characters and the new hospital? We will see if anyone’s outcome improves in the next episode “The Best with the Best to Get the Best” which debuts FRIDAY, OCTOBER 30 at 10:00pm on Cinemax. We close with that preview.