Are you ready to embark on another season of Cinemax’s THE KNICK? We sure are and the cast and crew were eager to get it to us.

Looking at Season Two’s first episode, many surprises were evident in this premiere: some good, others catastrophic. The good news is that Algernon is keeping steadfast and holding down the fort while John continues his drug induced and slightly paranoid stint of ‘rehab.’ Cleary has invested in an electric car as the official ambulance for transporting patients to the Knick; Cornelia is helping immigrants get food in San Francisco; Eleanor Gallinger is getting new teeth implanted and Algernon has reported a decrease in fatalities during surgery. Also Gallinger has returned to work, only to show his disdain towards Algernon as those old feelings of prejudice and jealousy return. Bertie continues his best in trying to keep busy with new surgical procedures while avoiding Nurse Elkins. That will prove kind of hard, given the fact that they have to perform surgeries together and are bound to run into each other outside the operating theater as well. We will most likely see strained or awkward encounters to follow. Barrow continues his public relations campaign to recruit more media and wealthy investors to the new site of The Knick. He walked around the hospital floor and the construction grounds proud as a peacock; surely all that posturing and sucking up will pay off somewhere down the line. But that remains to be seen. However, we all know that Barrow has a dark side and no doubt will be putting his connections through wealthy investors to work later on. Speaking of business transactions, guess who made an appearance as a business man, supplying a precious commodity for the men of New York City? It is Ping Wu. Yep, still dangerous, still a man that you would not dare cross, but he has taken over Bunky’s brothel and has established himself to be a shrewd proprietor. He makes sure that his women are disease free, receives medical attention and physicals from a legitimate doctor and does not condone abuse towards them. He still controls Barrow but the two come to an arrangement where monthly medical appointments and paying down debts is concerned. 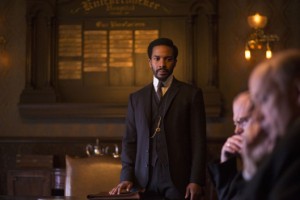 Algernon is keeping a low profile where his own health is concerned. This is very bothersome: as acting Chief of Surgery, his skills as a doctor have to be unparalleled. His health must be top notch and his surgical skills must be beyond reproach. One too many blows to the head has really affected his vision. The fact that he stays quiet about this and does not make any attempt to reach out for help is going to cost him down the line. Just watching him ask another doctor about any experimental treatments or surgeries conveys the depth of desperation Algernon has reached. As for Cornelia, she returns to New York City, at the uncomfortable behest of her lecherous father-in-law, under the guise that as a woman, and his daughter-in-law, she should be around family.  Don’t forget a woman’s place in 1901 is to stand by her husband, support his career and bear the future children. Like the corset she is forced to wear underneath her stylish and attractive clothing, she is restricted in having an opinion and a career. While Phillip appears to be a complacent husband, the idea of moving back to New York City to be closer to her family (and to Algernon) holds tantalizing appeal….but the idea of being under her father-in-law’s roof is enough to make one’s skin crawl. Sure enough, Algernon and Cornelia meet up and to say things are awkward at their first initial reunion is polite, to say the least.

Anatomy of a scene: Cornelia is in the presence of her husband, in the privacy and comfort of their bedroom, when suddenly her father-in-law is standing there, in the doorway. Highly inappropriate for the times, but considering Phillip is there in the room, it’s bearable. Daddy goes on and on about how nice it would be for his daughter-in-law to be in the presence of other women – he pointedly remarks that his wife and her mother in-law would be the most appropriate women to spend time with and learn from – because after all, she should be thinking about her family duty. We all know his disgusting intentions and family duty has absolutely nothing to do with it. While going back to New York City means being back at the Kni 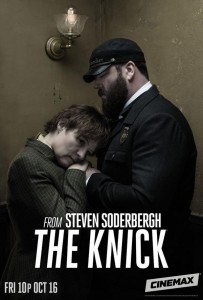 ckerbocker Hospital, it also has a very heavy price. Remember the way Daddy Showalter showed up, unannounced into Cornelia’s bedroom last season, with his perverted intentions made known and his eyes lingering on her state of undress, well, you can just imagine the stress and anxiety that Cornelia must be feeling. Especially knowing that she and her husband will have to be living with her in-laws, even if it’s just for a few months. This arrangement bodes a sense of malevolence, and one can only hope that Cornelia will have the courage to tell her husband the truth about his father, or she will fall victim to her father-in law’s perverted intentions.

Cleary shows a savvy side to his rough and tumble nature. The man has come to help his friend and colleague, Sister Harriet. Harriet has found herself in the direst of circumstances and Cleary has appointed himself her guardian and protector of sorts. After making a deal with Barrow, in which he will be driving an electric car (the hospital ambulance with the Knickerbocker logo on the side to advertise the hospital); he shows care and concern for Harriet after she becomes imprisoned for helping girls in trouble. Someone has been working at night, on the side and investing money in a few business endeavors. I was really impressed with the relationship between the two. A grudging respect has built up between the two and I sincerely hope that Cleary can help Harriet get out of jail. As for new medical crisis popping up in New York City, let’s just say that our health inspector, Speight, is really going to have his hands full, given the number of immigrants (legal and illegal) coming into New York City on a weekly basis. Speight is going to need more resources and additional people to keep the plague under control. But in a state such as New York, where the population is already bursting at the seams, how effective will Speight be in trying to contain the masses?

But it is Gallinger who shows a shocking sinister side: Thackeray goes ‘missing’ and believe it or not, it is Gallinger who kidnaps him. John has no choice but to submit to Gallinger’s demands. Gallinger wants his former position back and wants John to smarten up, clean up and get back on board at The Knick. Gallinger has his own motives, of course, as he needs to have his former position back – the man has endured enough – and that will bring him some stability and prestige. But Gallinger also wants Algernon out of the way, so that he and John can come back to The Knick, assume their former ranks and have everything go back to the way it was before John became addicted and Algernon was brought on board. 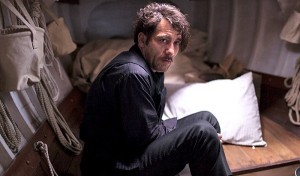 The problem is can you really try to kick a habit that you keep feeding into? Will John’s return to the medical profession bode well for staff morale? Will Algernon come to terms with his detached retina? Will Bertie learn to forgive and forget? As for the ten knots that Gallinger made Thackeray tie whilst on the boat, what was the significance? When thinking about tying a knot, is means to secure and hold something down or in place – does Gallinger want to pin down Thackeray, in an attempt to return back to the Knick and get rid of Algernon for good? Like the waves in a choppy sea, how many turbulent patches are headed towards the staff of the Knick? What other partnerships will form as a result of shifting allegiances? Who will remain true to the Knick and who will go off the beaten path? Will Algernon will be forthcoming to John about his vision impairments? The walls of a structure remain intact and people come and go, but the staff at the Knick is what makes the hospital a place of medical prestige and innovation. Everyone is going through some sort of personal challenge at the moment and although bleak, our beloved characters must endure through their struggles to rise up stronger, wiser and ready for any new challenges life puts in their respective paths.

Here is a Post-Op look at ‘Ten Knots”