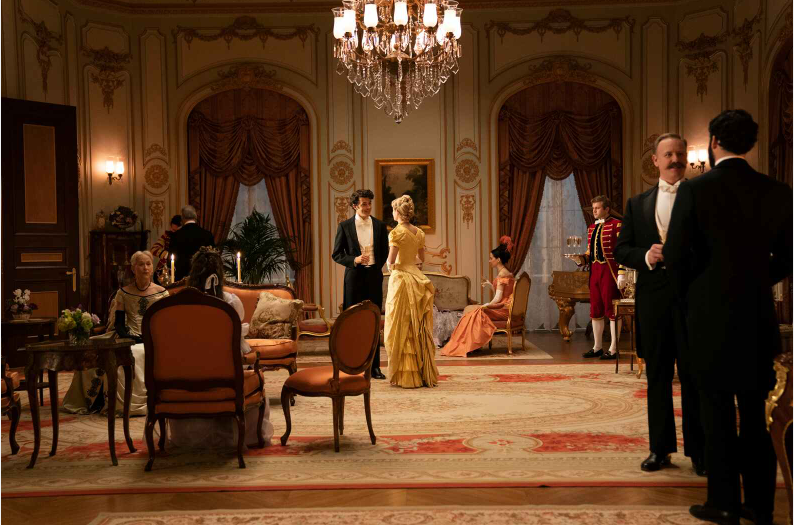 The Big Apple. New Amsterdam.  Empire City. The City That Never Sleeps. These are a few monikers of America’s most populated and largest urban area city, New York City. Downton Abbey showrunner and creator Julian Fellowes’ latest effort The Gilded Age, explores aristocratic 1880s New York City. Upon initial viewing, I stopped watching on my 49-inch television and resumed watching on my 120-inch projector screen. Despite not being special effects-heavy or containing any action sequences, The Gilded Age takes full advantage of the production values seen on premium cable. But does the story (thus far) deserve the same admiration?

Opening in 1882 in Manhattan’s Central Park, we are first introduced to Bertha Russel (The Leftovers’ Carrie Coon), George Russel (Morgan Spector), and their two children. The Russel family represents “new money” and although Bertha aspires to be Manhattan’s top socialite, both she and her husband abhor many of the traditions and traits of NYC’s long-established wealthy families. This is first apparent when the Russels move into Central Park with their “modern furniture” into a cream/limestone home. This is a stark contrast to their more traditional and subdued neighbors. Neighbors that are on Bertha’s shit list by the end of this pilot episode. 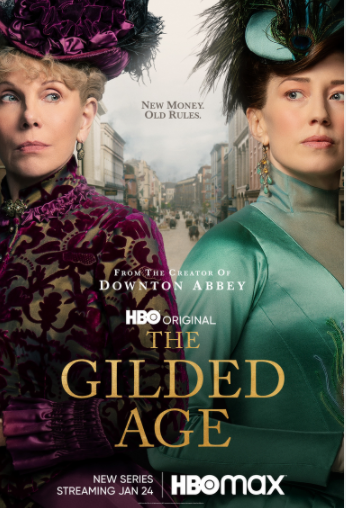 The van Rhijn family are archetype 19th century WASPs. Agnes van Rhijn (Christine Baranski) and Ada Brook (Cynthia Nixon) are proud socialites that cling to the old values of NYC’s elite. Agnes is particularly stubborn and has little sympathy for her deceased brother General William Brooks’ investment woes, viewing him as a simpleton who made poor decisions. However, Agnes does sympathize with his daughter Marian Brook (Louisa Jacobson), who is penniless and invited to live with her estranged aunts. Marian is the linchpin for the pilot and perhaps the series, for she transcends the storylines of the van Rhijn and Russel families, as well as the series’ supporting characters. Regarding the latter, Marian befriends an aspiring black writer named Peggy Scott (Denee’ Benton). When Marian losses her money and train ticket to NYC, Peggy purchases an extra ticket for Marian. The duo travel from Pennsylvania to NYC, in the negro section of the train, which is near the coal exhaust of the train.  The ride is far less comfortable than first class, but Marian is beyond appreciative.

A perpetual downpour prompts Marian to have an apprehensive Peggy stay the night at her aunts’ estate. Despite her pretentious and snooty nature, Agnes is impressed with Peggy’s assistance with Marian’s travel woes. Some of the estate’s staff are warm towards Peggy and others give her the side-eye and resting-bitch-face glances. Within 24 hours, Peggy is hired as Agnes’ secretary. Agnes notices that her new hire is desperately avoiding her home in Brooklyn. A short scene in middle-class Brooklyn featuring Peggy’s mom, vaguely informs viewers that Peggy’s father’s tyrannical parenting methods are the reason she does not want to go home. Later in the pilot, Peggy assists Marian in sneaking over to the Russel estate to crash a small social gathering. Peggy notices the mysterious and taciturn Mrs. Chamberlain (Big Love alum Jeanne Tripplehorn) standing alone for the entirety of the gathering. Although she has about 30 seconds of screen time, we can expect this Mrs. Chamberlain to be a catalyst for more tension as the series progresses. 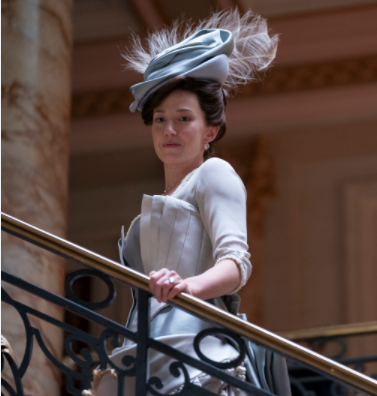 A captivating aerial shot takes us to a beautiful Newport, Rhode Island mansion overlooking the Atlantic Ocean. Here, Bertha and George have sent their son to mingle with other old money. Regarding the former, amongst a stellar cast, Carrie Coon’s Bertha Russel is the standout performance thus far. Coon manages to make such a cold character have screen presence. Bertha ends the episode crying in her lavish bedroom, having invited dozens of guests to a dinner party and having none show face. She vows to have all of NYC’s elite too soon know the Russel family, no matter the cost or method.

With “Never The New” we primarily see well but overly dressed people talk politics, money, fashion, and architecture with Mid-Atlantic accents. This is the same formula of Downton Abbey, a series that is mostly revered by critics internationally. The Gilded Age has received mixed reviews, with some professional outlets (particularly from the United Kingdom), calling the new series a Downton Abbey derivative. I enjoyed the pilot but must admit the series is quite a familiar territory. Furthermore, New Money vs. Old Money will not be nearly as captivating as the Starks vs. The Lannister’s or Hosts vs. Humans. Coupled with the revered Succession returning for a fourth season, some may find that HBO has the silver-spooned drama department sufficiently covered. Nevertheless, this reviewer is looking forward to the series’ future episodes on Mondays.

The series also has a companion The Gilded Age Podcast. Find it here.