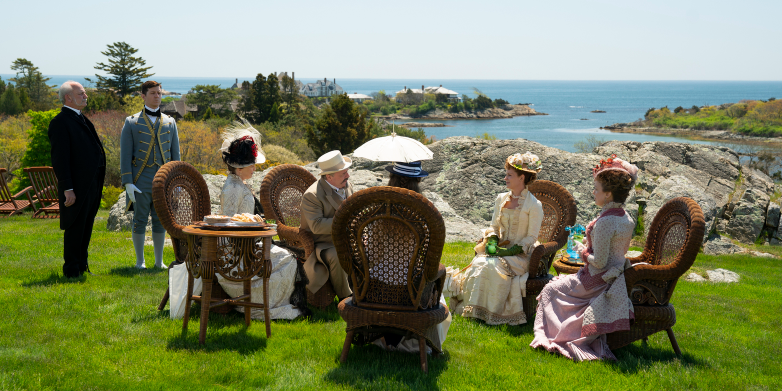 For its eighth episode, The Gilded Age highlights one of the trendy vacation spots for wealthy late 19th Century New Yorkers: Newport, Rhode Island. The mansions of Newport still stand today, and they continue to impress with their splendor (check out the Preservation Society of Newport’s Page here). Beyond its connection with this episode, the real Newport has stood in for the New York mansion interiors seen throughout the series, especially for the Russell home. Sadly, the producers were not able to get access into Mrs. Astor’s famous Newport home, Beechwood. Therein lies the fun of a television show like The Gilded Age: real-life luminaries like Mary Astor and her friend Ward McAllister mix with our fictional characters, and we are able to understand how people at different levels of acceptance worked their way into New York society. This acceptance is first and foremost on Bertha’s mind, as she inches her way ever closer to the influential Mrs. Astor (the criminally underutilized Donna Murphy), by insinuating herself into Mr. McAllister’s good graces. McAllister (played by Nathan Lane), himself an arbiter of good taste, coined the term “the Four Hundred” to refer to the families who truly mattered in New York’s high society. By gaining his acceptance and friendship, Bertha hopes to achieve all her dreams for herself and her family. 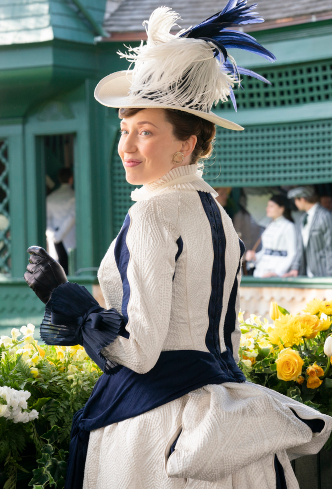 Despite her progress, Bertha is faced with situations in this episode that bring into question her priorities and her sense of self-worth. Mrs. Fish, a popular hostess (and another real-life historical figure played here by Ashlie Atkinson) takes great delight in taunting Bertha, reminding her regularly of the railroad scandal surrounding Mr. Russell. Though she holds her own during these interactions, the question remains: how much scrutiny and questioning is Bertha willing to endure in order to rise through the ranks? She is a proud woman; answering strangers’ questions must be particularly difficult for her. The question of her pride becomes ever more relevant when Bertha, Mrs. Fane, and Ward visit Beechwood during Mrs. Astor’s absence. When Mrs. Astor unexpectedly turns up, Ward pushes Bertha (and ONLY Bertha) out of the house in a most unceremonious manner through the service entrance. Has Bertha reached her breaking point?

Meanwhile, George is undergoing a more literal sort of trial. One of his managers, Dixon, claims that George elected to buy cheap parts for his train in order to save money, endangering lives in the process. George is outraged; whatever his sins, he is not cheap, nor stupid. He understands the cost of cheap parts, in reputation, in money, and in lives lost when the train inevitably crashes. Through a chance meeting with Marian, George realizes that not only has he been cheated by Dixon, but he has also been duped by his stenographer, who used his correspondence in an unrelated manner to frame George for the faulty parts. When George discovers this, he quickly makes the woman confess in court, and he is exonerated in the public eye, but not before promising to ruin the woman’s future career prospects. His reputation saved, George must now contemplate: will Bertha’s lack of attention to his troubles affect their marriage? His wife’s maid had purposely played up this angle, but back then George was steadfast in his support of his wife’s separate interests. Has that changed, now that Bertha has left him on his own during such a critical time? Turner’s campaign may yet yield fruit, even if she doesn’t benefit from it.

Turner is not the only scheming maid in town. Armstrong, Mrs. van Rhijn’s maid, is determined to get one over on Peggy Scott. When she intercepts a letter from 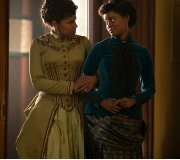 Mr. Raikes for Peggy, she reads it and alerts Mrs. van Rhijn of its scandalous contents: Peggy is a mother, and she lost the child. She is looking for the midwife who delivered her baby,  and Mr. Raikes has been acting on her behalf. Suspecting Armstrong’s treachery, Peggy comes clean with Marian and her aunts. She was in love, she ran away with her beloved, and they married. When the baby was stillborn, Peggy’s father took her away and offered her husband money to annul the marriage. This is the reason for the rift in the Scott family, the thing that Peggy cannot forgive. Despite her hard demeanor, Mrs. van Rhijn is sympathetic to Peggy. It was beautiful to see Agnes recall the children that she herself has lost, to see the wounded woman beneath. Agnes wants Peggy to remain, and admonishes Armstrong, but Peggy is too disgusted to stay in the same household as the treacherous maid. Nevertheless, Peggy and Agnes part on good terms. Peggy is now back in her parents’ household. I hope it’s not for long. Her father’s actions are far worse than Armstrong’s, and I would hate for Peggy to become dependent on him.

It is interesting that the episode began with a decision on Marian’s part: she wants to elope with Mr. Raikes. As I’ve stated previously, one of my minor quibbles with the series is Marian’s passivity. She doesn’t drive narrative action; she is simply swept by it. Here and now, she has finally decided to act, and as she is 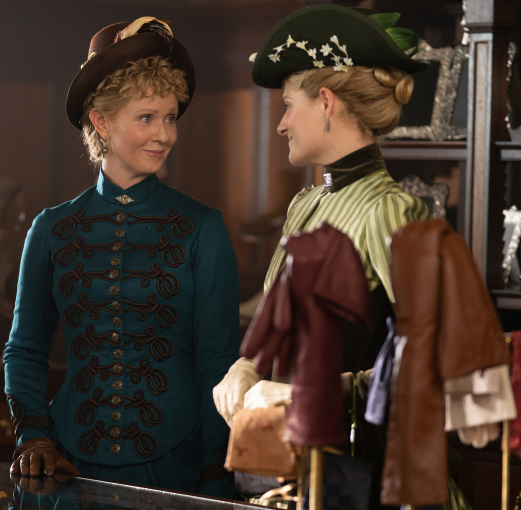 someone who isn’t used to acting, I fear that she is doing the wrong thing. Agnes is difficult, but she isn’t stupid. She has driven suitors away from her sister Ada before, and she was right in her assessment of these men’s characters. I fear Agnes is also right about Mr. Raikes, and I wonder if Marian learned anything from Peggy’s sad story. Time and again, the series has tried to impress upon Marian the importance of prudence: with her aunts’ lectures, as well as the examples provided by Peggy and Mrs. Chamberlain. To elope, to lie to your family, and risk losing everything, one must be assured that one’s beloved is worth those sacrifices. Does Marian truly know Mr. Raikes? Does she even love him, given that she seems more enamored with the idea of rebellion than she does with the actual man who proposed to her after a few brief meetings? Is Marian a better judge of character than Agnes? All of this remains to be seen, and I suspect Marian’s decision will be at the center of the season finale.

Check out the last episode of The Gilded Age‘s first season on March 21st.