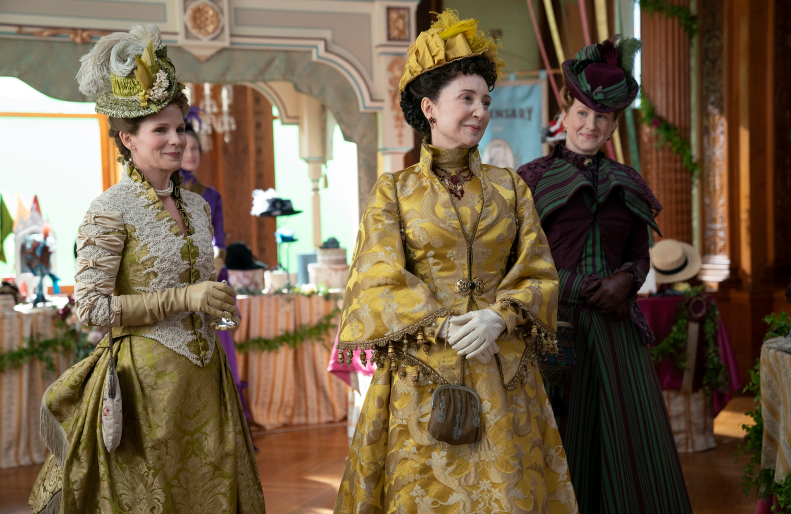 Depicting class disparities in societies has been a norm since the dawn of film. However, the 2008 global recession and 2011 Occupy Wall Street protests were a catalyst that commissioned a slew of programming with characters who have enough money to give every human a $1 bill. Episode two of HBO’s latest period piece is entitled “Money Isn’t Everything”, yet to the 1% of Central Park, it is the nucleus of their very existence. “Money Isn’t Everything” brings truth to Bertha Russel’s closing statement from the pilot: “I will never give up. And I promise you (her husband) this; I will make them sorry”.  For most people, these rich folk’s woes are difficult to have empathy towards. However, we all products of environments, and Julian Fellowes’s The Gilded Age aims to depict the bankers, engineers, and socialites that laid the foundation for what we know as New York City. 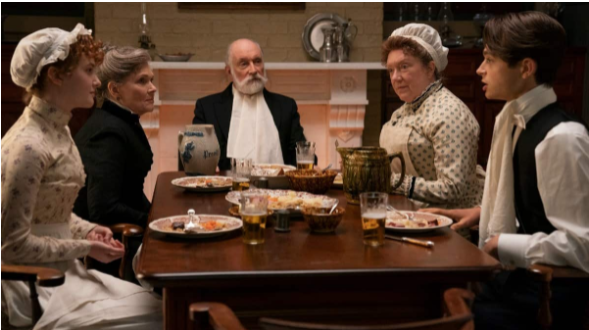 The opening of the episode has Mrs. Bauer (Kristine Neilsen, seated between the two men at right) violently accosted by the world’s best-dressed loan shark, over a $50 ($1336 in 2022) gambling debt. Peggy witnesses the second occurrence, and Mrs. Bauer admits she has gambling debts. Peggy and Marian attempt to help Mrs. Bauer but Ada (reminder: this is Marian’s aunt) gets wind of the situation and pays the debt. One must question the purpose of introducing such an intense story arc, only to have it corrected before the conclusion of the episode. Certainly, Mrs. Bauer may continue to have a gambling addiction as the series progresses, however, a slow-burn approach would have added so much needed tension that is not this rich family vs. the other rich family.

Mr. Raikes meets with Marian at the newly built Bethesda Fountain, a grand piece of architecture that still exists in Central Park. The acutely apparent attraction between the two seems genuine, although it was obvious that Raikes’s fee waiver was not solely based on Marian’s inheritance issue. Marian asks Raikes to help Peggy with a still not fully revealed personal problem. Marian inquires (seemingly on behalf of the audience) what they discussed. However, true to his lawyer roots, Raikes does not break client-attorney privileges. Peggy’s troubled relationship with her father could be a pivotal story arc.

Bertha Russell’s threatening promise is further fueled when two more socialites (Mrs. Fane and Mrs. Morris), passive-aggressively switch a bazaar for charity from Bertha’s home to a different location. George crashes the bazaar and hands each venue a crisp $100 bill ($2700 in 2022) to have all items shipped to his home within the hour. A pleased Bertha watches from afar. 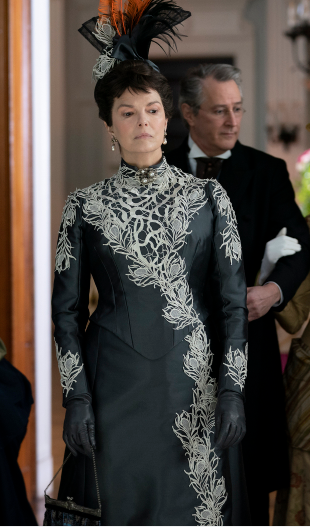 At the bazaar, we once again see the mysterious Mrs. Chamberlain (Jeanne Tripplehorn of HBO Big Love). And she speaks. Agnes and Ada warn Marian to not talk to Mrs. Chamberlain, for “death has followed her.” It remains to be seen if this ominous statement is hyperbole or literal truth, nonetheless, the curious Marian does not heed the warnings of her aunts. Mrs. Chamberlain is polite to Marian but does admit she is viewed unfavorably by the other elites. Is she from old money like most the other 1 percent of NYC?  Is she “new” money as the Russel family represents?

The banter between the rich is well-written but the series needs the stories of mysterious Ms. Peggy and Mrs. Chamberlain to shine. Without meaningful anomalies thrown into the mix, The Gilded Age would be difficult to keep viewers’ attention spans. The series has such a multitude of characters that one may need an excel spreadsheet to keep up with the roster.  The Gilded Age returns February 7, 2022, at 10pm ET on HBO.